NEWS
Snoop Dogg and Eminem Drop a New Video That's All About Smoking Uber-Dank Weed
AD
Serve up some burgers, because the beef has been officially squashed.
Published on June 28, 2022

Cover image is a screenshot via

Over the weekend, the Doggfather and Slim Shady dropped a smokin’ hot music video together. And yes, the song is all about blazing that gas.

The track, titled “From the D 2 the LBC,” starts off with Em and Snoop chilling in a studio together. While Eminem gets set behind the mic, he catches a faceful of second-hand sticky icky.

“Yo Snoop, are you blowing smoke in here?” Em asks.

“Ain’t no smoking here. Everything is clear in here,” says Snoop, who’s puffing a blunt so fucking massive that he’s using a mason jar for the cigar tip. 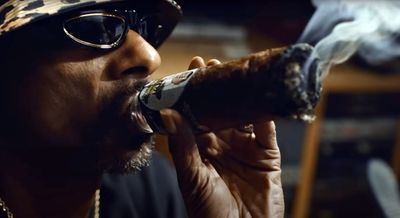 At some point, that second-hand hits Em, who does indeed spit, “Dope is addictive, just like they call it merry-ju-wanna / ‘cause like marriage, you wanna marry Jane / it’s like you and Spider-Man feel the very same.”

And this is all happening as both rappers flicker in and out of existence as animated NFT Bored Ape avatars.

This year’s Super Bowl LVI in Los Angeles saw the two hip-hop heavyweights collaborate after a too-long hiatus from the studio together, along with their mutual funkmaster, Dr. Dre, as well as 50 Cent, Mary J. Blige, and Kendrick Lamar.

But we haven’t actually seen the Doggy Dogg and Slim throw down on a new track together since 2000’s (what?!) “Bitch Please II” on Eminem’s The Marshall Mathers LP.

The latest collab video also marks the official end of the duo's recent beef. In 2020, Snoop and Slim got into some “favorite rapper’s favorite rappers” drama, after Em didn’t make Snoop’s top-ten list. Wherever that short-lived beef went, it’s obviously up in smoke now.

And we’ll blaze to that with "that thang that killed John Wayne." Cheers!

MUSIC
SNOOP DOGG
RAPPERS
FIRE
MORE...
MERRY JANE Staff
FOLLOW
MERRY JANE is based in Los Angeles, California and is dedicated to elevating the discussion around cannabis culture.
Share this article with your friends!
AD
By using our site you agree to our use of cookies to deliver a better experience.
Accept
Decline
MORE FROM MERRY JANE