NEWS
Psychedelic Parenting Is Now a Thing, But Does It Actually Work?
AD
Some parents say that by microdosing psychedelics, they can conquer their own childhood traumas while reconnecting with their children. The science hasn’t yet confirmed if psychedelic parenting is effective, though.
Published on October 29, 2019

Some parents find that raising a family is much easier if they supplement it with a little cannabis. Now, there’s a trend to include psychedelics such as psilocybin or LSD into the parenting regimen, too.

Recently, the Brooklyn Psychedelic Society held a “Plant Parenthood” event where 30 parents from all walks of life — including a church founder, a poet, and a therapist — spoke with one another about how moderate-to-microdosed psychedelics use could improve their parenting. So-called “psychedelic parents” claim that small amounts of psychedelics used sparingly helped them deal with the anxiety and depression that comes with raising a family. Dosing also helped many parents connect with their children on a deeper level, often described as feeling “present” for their kin.

"Psychedelics have cleared the path between me and my son," said Nicholas Powers, a journalist and poet, during the event, Insider reported. "This helps me listen to him."

A mother at the Brooklyn event temporarily quit her job as a therapist after her pregnancy led to a bout of debilitating postpartum depression. Her condition affected her ability to raise her daughter, as she often caught herself unfairly projecting her own childhood traumas onto her child.

But the mother, Nina, said microdosing LSD and psilocybin mushrooms helped. Microdosing is method of taking small amounts of a psychedelic, much too small to cause a full-blown “trip,” but just enough, theoretically, to affect the mind.

Gallery — Shrooms and Weed Will Help You Succeed:

"I realized how much I was reliving my childhood trauma through my own child," said Nina, whose last name was withheld to protect her identity, to Insider. "It was affecting my mothering skills. I wanted the cycle of trauma to end with me."

But scientists aren’t certain that microdosing actually does anything. While Silicon Valley whizkids swear that microdosing enhances creativity and facilitates problem-solving, one 2019 study concluded that microdosing was, at best, pure placebo. At worst, it could exacerbate “neuroticism,” The Guardian wrote.

“All participants believed that microdosing would have large and wide-ranging benefits in contrast to the limited outcomes reported by actual microdosers,” wrote the researchers in February. “Notably, the effects believed most likely to change were unrelated to the observed pattern of reported outcomes.”

In other words, microdosers may anticipate life-altering results from taking teeny amounts of psychedelics, but experimental results don’t agree. While microdosers did report better focus, “life satisfaction" and “creativity” seemed unaffected by microdosing. Additionally, experiencing “negative emotions” and “neuroticism” slightly increased among study participants. Ultimately, the researchers called for more research into the topic before drawing any definitive conclusions on microdosing. 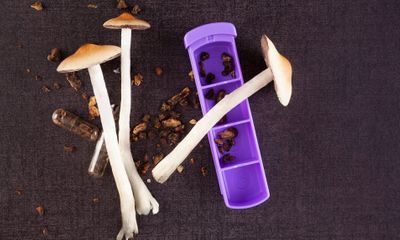 Not every psychedelic parent goes the microdosing route, either. Danny Allan, a filmmaker by trade, said that he and his wife eat a “hearty” helping of ‘shrooms every few months to jolt them into a more sympathetic parenting mindset. Previously, he alternated between smothering his child with too much attention and completely ignoring his child at other times.

"When you do that internal work with the help of psychedelics, you can heal from childhood wounds, and make your parenting decisions with love and empathy,” Allan told Insider.

While the jury may still be out regarding microdosing, fully dosing on psychedelics most certainly leaves a lasting, measurable impact on parents. In 2015, psychedelic therapist, Katherine McLean, PhD., told the Psychedelic Parenting podcast that she had directly observed improved child-and-parent relations with parents who took psilocybin as part of a study at Johns Hopkins University.

And McLean would know, because, as she claims, she’s one of those parents, too.

"I feel that every experience I've had personally and supporting others with psychedelics prepared me for motherhood," she said during the podcast, VICE reported.

It should be noted that psychedelic parenting focuses solely on adult parents who responsibly consume psychedelics. Dosing children, especially young children, on psychedelics is not only discouraged, it is considered utterly irresponsible and could warrant a call to child protective services. So be smart and don't do it.

Psychedelics and other psychoactive substances such as psilocybin, LSD, MDMA, DMT, and ayahuasca are currently being investigated as potential medical treatments for difficult-to-manage conditions such as PTSD, clinical depression, chronic anxiety, chronic pain, drug addiction, and a fear of death triggered by terminal illness. Psilocybin mushrooms were recently decriminalized in Denver, Colorado. Shortly after, Oakland, California passed a city ordinance that prevents police from using funds to persecute people for possession of all plant-based psychedelics. And as of last week, Chicago's City Council voted to approve a resolution that could lead to psilocybin decriminalization in the near future.

NEWS
PSYCHEDELICS
PARENTS
MEDICINAL PSYCHEDELICS
MORE...
Randy Robinson
FOLLOW
Based in Denver, Randy studied cannabinoid science while getting a degree in molecular biology at the University of Colorado. When not writing about cannabis, science, politics, or LGBT issues, they can be found exploring nature somewhere in the Rocky Mountains. Catch Randy on Twitter and Instagram @randieseljay
Share this article with your friends!
AD
By using our site you agree to our use of cookies to deliver a better experience.
Accept
Decline
MORE FROM MERRY JANE