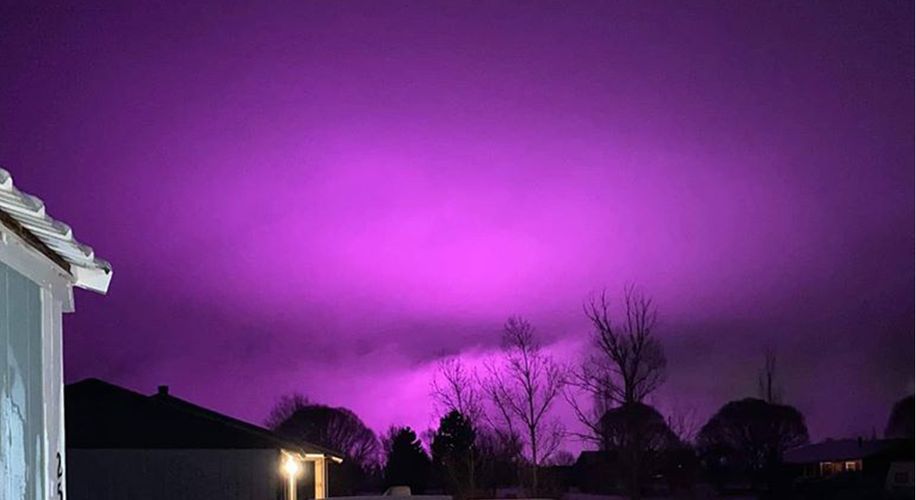 The sky over Snowflake, Arizona glowed bright purple on Friday night, thanks to the UV grow lights from Copperstate Farms — a medical cannabis grow.

The sky over Snowflake, Arizona glowed bright purple on Friday night, thanks to the UV grow lights from Copperstate Farms — a medical cannabis grow.

No, aliens did not touch down in the Southwest desert this weekend, but you would be forgiven for assuming as much after a bright purple glow enveloped the skies in Snowflake, Arizona.

But according to the administrators at the Navajo County Facebook page, the abnormal glow was not extraterrestrial at all, but the result of a power-heavy pot grow mixing with a sky-blanketing snowstorm.

“The purple glow is a result of UV lights from nearby medical marijuana farm Copperstate Farms and the snow clouds overhead,” a post on the Navajo County Facebook page read.

Copperstate operates a large greenhouse cultivation site in Snowflake that employs more than 200 people. According to our community of cannabis-growing friends over at @TheBlacklistxyz, though, the lights causing the spectacular glow are most likely not UV, but LEDs. And while the licensed medical marijuana farm has not yet commented on the now-viral video of their unexpected light show, a look back at the company’s Instagram page suggests that this isn’t the first time they’ve sparked up the night sky.

But while the violet greenhouse glow usually only lights up the immediate area around the grow, a fresh dusting of snow and total cloud coverage made the purple glow visible for miles.

Now this is some purple haze that would make Jimi proud.