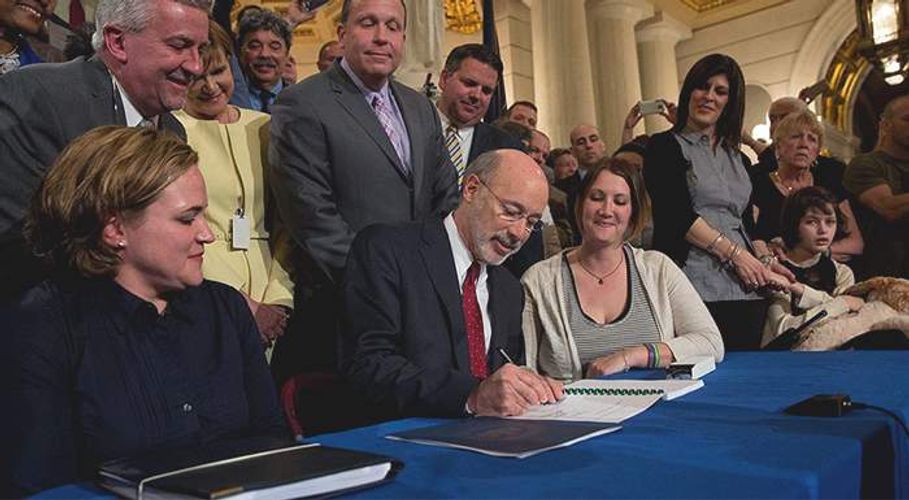 Tom Wolf says he wants to decriminalize marijuana across the Keystone State.

Tom Wolf says he wants to decriminalize marijuana across the Keystone State.

Earlier this week, during WITF-FM’s “Smart Talk,” Wolf told listeners that many prosecutors around the state are taking on more relaxed attitude toward simple pot possession, but the fact that there are still people going to prison for a substance that is legal in over half the nation suggests a desperate need for a decriminalization law.

“I think we need to do that in a more systematic fashion,” Wolf said. “There are too many people who are going to prison because of the use of very modest amounts or carry modest amounts of marijuana, and that is clogging up our prisons, it’s destroying families and it’s hurting our economy, so I think decriminalization is the first step.”

As it stands, anyone busted with up to 30 grams of marijuana in Pennsylvania can be charged with a criminal misdemeanor, which comes with a penalty of up to 30 days in jail and a maximum fine of $500.

But some of Pennsylvania’s district attorneys argue that there are “very few people” are going to jail for possession of a little weed.

“There are plenty of people in jail with drug problems,” Dauphin County district attorney Ed Marsico told the Associated Press. “We realized years ago that treatment is the best way to work with those offenders, but basically nobody goes to jail for possession of a joint.”

But it is not necessarily the jail time that causes the biggest problem when it comes those caught in possession of marijuana – it’s the after effects of living with a drug charge.

“Even for individuals who are never incarcerated, collateral consequences that flow from arrests and convictions — such as lost jobs, ineligibility for public housing, suspended driver’s licenses, and restrictions on access to federal student loans — can significantly derail lives,” according to the American Civil Liberties Union.

Unfortunately, while Governor Wolf seems fully prepared to sign a decriminalization bill should one find its way to his office in 2017, he isn’t quite ready to stand in support of full legalization. Yet, he believes Pennsylvania has a responsibility to examine the states that have ended prohibition and determine if it is would work.

“I’m not sure why we need to go beyond [decriminalization], and I think we can watch what happens in Washington and Colorado and Oregon and see what their experience is. I’m not sure it’s been uniformly great, but I think we have to wait and see,” he said. “I think the jury is still out on whether Colorado is addressing this, approaching this the right way. Washington, I think, is doing it differently. They have different pricing and taxing systems, and so I think there’s still a lot to learn as to how much revenues Colorado’s generating, and whether other revenue streams are actually suffering because of this. I just don’t know. I’m willing to keep an open mind and look at this.”

There is hope that Republican dominated Legislature, which has never taken a chance on a decriminalization measure, will step up in 2017 to work toward this reform.