NEWS
Nightmares Do Come True: Woman Bit By Snake Hiding in Her Toilet
AD
As the Australian resident was "mid-stream," a five-foot Carpet Python hiding inside the bowl bit her right on the ass. The terror!
Published on January 29, 2019

Last week, an Australian woman experienced an IRL version of our least favorite recurring nightmare: As 59-year-old Mary Richard sat down to pee in her own home, a five-foot python was hiding inside the bowl and bit her right on the ass.

According to a Facebook post from the Snake Catchers Brisbane, Ipswich, Logan & Gold Coast, Richard called the service and explained how she went to the bathroom without turning the light on. As she was “‘mid-stream,’ she felt something bite her bottom! As you can imagine, she jumped up quite quickly.”

The snake catchers arrived on the scene and helped the victim clean her non-lethal puncture wounds. “Fortunately for us, the customer remained calm and remembered not to flush the toilet, as flushing could cause the snake to retreat down into the pipes again,” wrote the animal control group. The Carpet Python was subsequently removed from the bowl and safely transported elsewhere. 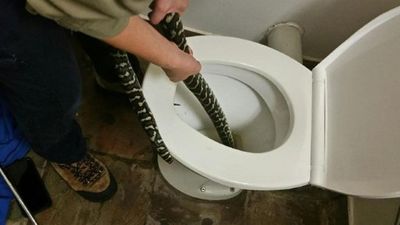 While it’s not uncommon for snakes to end up in Australian toilets, the Snake Catchers noted that it’s rare for the slithery beasts to actually bite unsuspecting bathroom users. “[Richard] said her toilet habits have forever changed! Lights will be on, and she will always give the bowl a quick glance before sitting down,” they added.

Take this lesson to heart, friends: Double check before you sit. At the very least, you’ll confirm the seat is down… and that there are no reptiles taking a nap in your waste.

NEWS
VIRAL
CULTURE
SHORT FORM
MORE...
Doug Mann
FOLLOW
Doug Mann writes about cannabis and runs a blog documenting his experiments with "dessert nachos." The arthouse film "Half-Baked" was most likely based on the time he accidentally killed a police officer's horse.
Share this article with your friends!
AD
By using our site you agree to our use of cookies to deliver a better experience.
Accept
Decline
MORE FROM MERRY JANE