NEWS
Nevada’s First Weed Cafe Will Feel Like a Microbrew’s Tasting Room
AD
West Hollywood just got its first pot lounge, where tokers can blaze with their peers in a social setting. Now, it’s Las Vegas’s turn.
Published on October 4, 2019

Named The Vegas Tasting Room, the lounge is owned and operated by NuWu, a cannabis company licensed to the state’s Paiute tribe. The lounge resides on tribal lands, so it’s subject to tribal authorities, not Las Vegas’s city council.

"In Nevada, it is the first," said Alfreda Mitre, a member of the Paiute Tribe Council, to a local NBC affiliate. "So, we are looking forward to providing this experience to our customers."

Currently, there are no other public spaces in Nevada where cannabis smokers can enjoy a bowl or a joint. Residents can safely consume weed in the privacy of their own homes, but tourists must scramble to find places where they can enjoy the state’s newly legalized weed products. The area’s hotels, restaurants, bars, nightclubs and other public businesses don’t permit cannabis consumption, and since casinos are federally regulated, even mere possession of weed isn’t allowed at the world-famous gaming spots.

But The Vegas Tasting Room, despite its name, isn’t being hosted within Las Vegas city limits. Since it’s technically on tribal property, it’s subject to tribal rules, which can supersede state rules (like AB 533 temporary licensing ban) in certain cases.

The Nevada legislature and Governor Sisolak implemented AB 533 due to safety concerns. They’re worried that letting people get high in a “weed bar” will lead to an increase in traffic accidents and fatalities. To prevent patrons from getting too smoked-out, The Vegas Tasting Room observes rules similar to those found in alcohol bars. 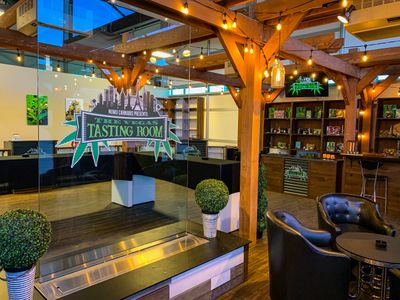 "There is a time limit that will be in place," Mitre explained. "We do have budtenders to do that,” and staff “will be able to gently nudge the customer when they think their needs will be met."

To cut down on stoned driving, The Vegas Tasting Room is partnering with shuttling services such as taxis, Lyft, and Uber, so tokers don’t have to transport themselves home (or to their hotel).

While there’s evidence that weed can impair driving ability in some cannabis consumers — especially those with low tolerances or who are new to cannabis — other studies have shown conflicting results. Data from weed-legal states like Colorado and Washington do show increases in traffic incidents since legalization, though whether intoxicated driving or sudden spikes in population (and thus traffic density) are the true cause has yet to be determined.

Other states such as Oregon and Colorado have already had weed lounges. Earlier this year, Colorado approved a statewide bill to officially create a licensing system for social consumption businesses after years of legal ambiguities.

CANNABIS SOCIAL CLUBS
LAS VEGAS
INDUSTRY
SOCIAL CONSUMPTION
MORE...
Randy Robinson
FOLLOW
Based in Denver, Randy studied cannabinoid science while getting a degree in molecular biology at the University of Colorado. When not writing about cannabis, science, politics, or LGBT issues, they can be found exploring nature somewhere in the Rocky Mountains. Catch Randy on Twitter and Instagram @randieseljay
Share this article with your friends!
AD
By using our site you agree to our use of cookies to deliver a better experience.
Accept
Decline
MORE FROM MERRY JANE