NEWS
NBA Will Not Drug Test Players During the Coronavirus Crisis
AD
Pro ballers normally undergo six mandatory drug tests during the season, but since the NBA season has been suspended due to the coronavirus outbreak, there will be no drug testing.
Published on March 17, 2020

The NBA and the National Basketball Players Association (NBPA) have agreed to exempt all players from mandatory drug testing while the current season is suspended due to the coronavirus pandemic.

According to the NBA’s contracts, players must submit to six separate drug screens during any given season. These drug tests look for drugs such as marijuana, cocaine, and performance enhancers like anabolic steroids. So, although this doesn’t necessarily mean the NBA’s ballers will start partying like it’s 1999, they could, at least temporarily.

Of the major American professional sports leagues, the NBA maintains some of the strictest policies against marijuana use. Whereas the NHL has mostly ignored weed smoking, and the MLB and NFL recently changed their policies to stop suspending players over pot, the NBA continues to put players on career-damaging time-outs if they test positive for any illicit substance, including cannabis.

Last week, NBA Commissioner Adam Silver announced that the 2019-2020 season would go on hiatus after one player, Rudy Gobert of the Utah Jazz, tested positive for the virus that causes COVID-19. Earlier in the week, Gobert pulled an insensitive “prank” on journalists at a press conference by touching their microphones with his bare hands and coughing on them. A few days later, he tested positive for the novel coronavirus and entered a self-imposed quarantine.

Gobert has since apologized for last week’s antics, which the NBA didn’t find funny. That’s because, in the two weeks prior to Gobert’s positive test result, the Utah Jazz played against seven teams, potentially exposing players on the opposing teams to the coronavirus. Those seven teams went on to play an additional 12 teams, meaning nearly the entire NBA could have been exposed to the virus in that short period of time. 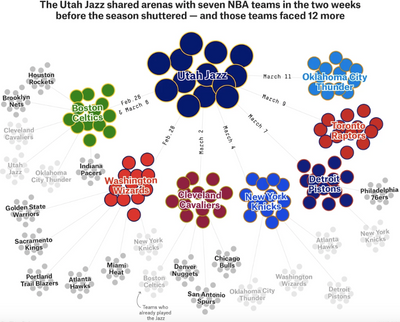 The CDC believes the coronavirus incubates in a patient for five to 14 days before symptoms appear, though newer studies indicate the virus could incubate for up to 27 days. Although the virus most readily spreads through prolonged physical contact that exchanges bodily fluids (sweat, saliva, tears, or even blood), the virus can spread through airborne means, too. Furthermore, the virus can also infect others before a patient shows any symptoms at all.

Since Gobert’s positive test result for the coronavirus, at least one more NBA player has tested positive, as well. Last Thursday, Donovan Mitchell, who is a teammate of Gobert's on the Jazz, announced that he had the coronavirus, too.

Thanks to everyone who has been reaching out since hearing the news about my positive test. We are all learning more about the seriousness of this situation and hopefully people can continue to educate themselves and realize that they need to behave responsibly both for their own health and for the well being of those around them. I appreciate the authorities in Oklahoma who were helpful with the testing process and everyone from the @utahjazz who have been so supportive. I am going to keep following the advice of our medical staff and hope that we can all come together and be there for each other and our neighbors who need our help❤️🕷

The NBA’s suspended season will last until April, though it may go longer now that the US government is advising cancelations of all gatherings of more than 50 people. While the season remains on hiatus, Gobert and other NBA owners and players have offered to donate their salaries to arena employees who aren’t receiving any work right now.

"These are the folks who make our games possible, creating the perfect environment for our fans and everyone involved in the organization," Zion Williamson of the New Orleans Pelicans posted to Instagram. "This is a small way for me to express my support and appreciation for these wonderful people who have been so great to me and my teammates and hopefully we can all join together to relieve some of the stress and hardship caused by this national health crisis."

The people of New Orleans have been incredibly welcoming and supportive since I was Drafted by the Pels last June, and some of the most special people I have met are those who work at smoothie King Center. These are the folks who make our games possible, creating the perfect environment for our fans and everyone involved in the organization. Unfortunately, many of them are still recovering from long term challenges created by Katrina, and now face the economic impact of the postponement of games because of the virus. My mother has always set an example for me about being respectful for others and being grateful for what we have, and so today I am pledging to cover the salaries for all of those Smoothie King Center workers for the next 30 days. This is a small way for me to express my support and appreciation for these wonderful people who have been so great to me and my teammates and hopefully we can all join together to relieve some of the stress and hardship caused by this national health crisis. This is an incredibly resilient city full of some of the most resilient people, but sometimes providing a little extra assistance can make things a little easier for the community.

To date, the novel coronavirus has infected at least 194,000 people worldwide and killed nearly 7,900. Roughly 81,000 patients have fully recovered from COVID-19.

NEWS
SPORTS
HEALTH
CULTURE
MORE...
Randy Robinson
FOLLOW
Based in Denver, Randy studied cannabinoid science while getting a degree in molecular biology at the University of Colorado. When not writing about cannabis, science, politics, or LGBT issues, they can be found exploring nature somewhere in the Rocky Mountains. Catch Randy on Twitter and Instagram @randieseljay
Share this article with your friends!
AD
By using our site you agree to our use of cookies to deliver a better experience.
Accept
Decline
MORE FROM MERRY JANE