NEWS
Much Needed ‘Organically Grown’ Certification Is Coming to the Cannabis Industry
AD
Do you know what's in your weed? Unless you grew it, you probably don't. Thankfully, organic certification is finally coming to the cannabis industry, giving consumers more agency over what they put in their bodies.
Published on February 4, 2020

Grocery shopping can be a long, detail-oriented journey if you’re someone who scans every ingredient label in an effort to avoid consuming pesticides and chemical fertilizers. Thankfully, the ‘USDA Organic’ label signals safety from these toxic additives. That same assurance doesn’t exist in cannabis, however, an issue our cultivation columnists have lamented in the past.

In fact, weed’s continued Schedule I status excludes pot growers from achieving "organic" certification, which is controlled by the federally-run USDA. But now, new standards are finally being developed by the Cannabis Certification Council (CCC), which will soon allow cannabis cultivators and manufacturers to add an “Organically Grown” sticker to their products.

The CCC is a nonprofit organization that’s focused on providing cannabis consumers and businesses with education, and helping foster transparency and choice within the industry. The group formed in 2018 when the Portland-based Ethical Cannabis Alliance and the Organic Cannabis Association from Denver, Colorado, joined forces as a result of their shared goals: To create ethical, organic cannabis options within the space. 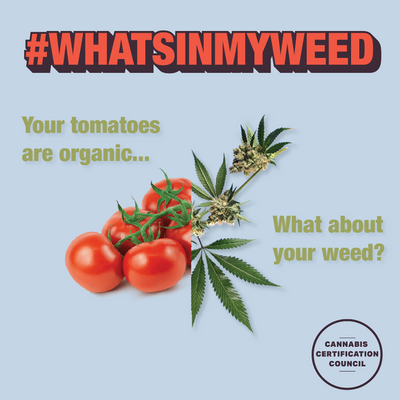 Leslie McAhren, who’s worked as the director of research and an executive director at CG Corrigan (a cultivation group in New Mexico) for nearly a decade, told Forbes that a set of standards for growing cannabis as carefully and responsibly as organic foods will help advance the industry’s growth.

“Growing clean cannabis has been something we’ve [CG Corrigan] been practicing for years, but converting this knowledge into a policy standard is the best way to protect the public’s health and to inform consumers nationwide,” said McAhren. CG Corrigan, she explained, is also a sponsor of this new certification. “Honestly, an organic standard is a natural progression for the cannabis industry and sustainable production."

To earn the CCC’s Organically Grown certification, applicants will be required to pass several site inspections that are conducted over a period of months. Expected to take up to half-a-year to develop, the new standards will have different colored labels to identify products made with cannabis grown indoors, in greenhouses, or outdoors.

The CCC says that as a nonprofit without conflicts of interest inherent with industry players, its clean cannabis certification program, and others like it, will carry weight with cannabis businesses and consumers. Amy Andrle, a founding board member of the CCC and the co-owner of vertically integrated cannabis firm L’Eagle in Denver, said that such verified certification standards will give consumers confidence in their purchases.

“The bulk of the problem the industry has been lies in false organic claims,” said Andrle. “Certification will help to clarify the market and inform consumers about what they are buying. And as the first cannabis label that everyone — growers, consumers, [and] owners — can clearly understand, a premium can be applied to certified products in the legal marketplace.”

To promote clean cannabis and sustainable production, the CCC has launched a ‘What’s In My Weed’ campaign on social media to highlight the connection between organic fine foods and quality cannabis. The group also hosts a Cannabis Sustainability Symposium series, with events in four cities across the US this year.

NEWS
AGRICULTURE
ENVIRONMENT
CULTURE
MORE...
A.J. Herrington
FOLLOW
A.J. Herrington is a freelance writer focusing on cannabis news, business, and culture and has written for publications including High Times, Sensi, and HEMP. When he's not banging away at the keyboard, you'll probably find him tending to his plants in the garden.
Share this article with your friends!
AD
By using our site you agree to our use of cookies to deliver a better experience.
Accept
Decline
MORE FROM MERRY JANE