NEWS
More Than Half of Cannabis Tourists Bring Weed Home, New Survey Finds
AD
A new study indicates that most cannabis tourists travel to legal states with a mission in mind: Buy weed, and bring it back home.
Published on January 6, 2020

Weed tourism is booming. Subsequently, so is the number of people bringing home cannabis souvenirs, too.

A new survey conducted by AmericanMarijuana.org polled adults who recently traveled to states with recreational cannabis. Out of 1,003 people, over 56 percent said they brought weed back home with them, and more than 67 percent said they lived in states where cannabis is still illegal.

So, what are the top states for weed-hungry wayfarers, you ask?

Colorado leads the pack, according to the survey, for states most traveled to for the joys of recreational marijuana. 52.2 percent of people reported traveling to the Rocky Mountains to get their herbal fix. Following Colorado is sunny California with 33.1 percent of respondents journeying there. The Golden State is followed by Washington (13.1 percent), Nevada (11 percent), and Massachusetts (10.2 percent).

The average number of trips tourists took ranged from 2.5 to 3.5 per year. The majority of travelers drove (57.3 percent), while one-third took a plane to their cannabis destination (36.5 percent). 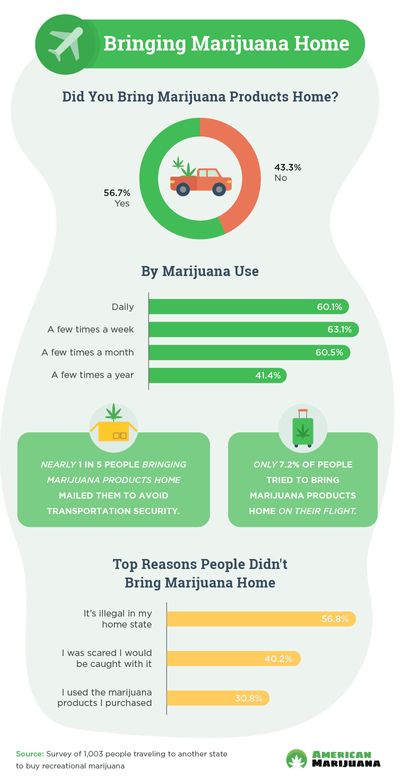 What’s telling is that 56.7 percent of people — over half of respondents — said they took cannabis home with them either by packing it in their luggage and flying or driving with it across state borders. People also reported mailing packages full of weed back to their homes.

Keep in mind, folks, that taking cannabis across state or national borders is federally illegal. Sending weed in the mail is also against the law. You’re taking a risk doing either.  And if you think police aren’t seizing loads of marijuana along legal-state borders, think again.

The risk is there. When it comes to flying, however, the TSA eased the worries of travelers last May when the agency released a statement saying it will not actively search for cannabis. But, if TSA agents do catch you with weed, they’ll default to the state laws in which you’re flying. In other words, you still have to be careful when flying with cannabis.

The US Postal Service says you can mail CBD. However, it is illegal to mail cannabis with more than .3% THC, because marijuana remains a Schedule I substance in the eyes of the federal government. The USPS seized 908 marijauna packages in Colorado in 2017, and in Massachusetts, postal workers seized a record number of 434 packages in just four months following legalization.

So, is cannabis prohibition in the respondents’ home states a factor for these travelers? That answer is a resounding yes.

Although participants in the study reported traveling to another state for cannabis, keep in mind the limitations here. First, 1,003 people is a relatively small pool. The survey isn't balanced, either, as 54.1 percent were male, 45.6 percent female, and less than 1 percent did not disclose their gender. The survey also leans toward people who already use cannabis rather than representing the general population. So, there are some gaps.

This small survey does point to one big truth, though: Legalizing cannabis leads to substantial economic benefit. Serious coin was dropped on these cannabis vacations. The average cannabis tourist spent $264.74 on weed during the course of a single trip. Top cannabis products purchased were edibles (69 percent), which makes sense considering they’re one of the easiest forms of cannabis to travel with. Then came flower products (57.1 percent), prerolled joints (38.8 percent), followed by CBD oil (22.3 percent), and THC oil (17.7 percent). Hazy travelers visited 2.7 dispensaries during their trips, on average, according to the survey.

The money spent on overall tourism goes up even more when you add food, lodging, transportation, and activities. Each person’s trip averaged out to $980.32 total. That seems reasonably low, given the average time spent on a weed vacation was 4.3 days.

The survey also asked how many grams of weed these travelers purchased. For those who use marijuana daily, the average amount they purchased was 31 grams — more than an ounce. People who consumed just a few times a year purchased 22.9 grams of marijuana on their last trip. Apparently, even the newbies are stocking up for high times.

TRAVEL
420
LEGALIZATION
TOURISM
MORE...
IN THIS STORY
CBD
Click to shop at our CBD store
Lindsey Bartlett
FOLLOW
Lindsey Bartlett is a cannabis journalist writing on the beats of culture, politics, and industry since 2012. The Denver-born advocate has also been a medical cannabis patient for over a decade. Her work has been featured in Yahoo Finance, Benzinga, The Denver Post, The Cannabist, The Washington Post, Bloomberg, Marijuana Business Daily, Leafly, and Weedmaps News. Bartlett currently resides in Laguna Beach, California. You may find her casting spells, smoking joints, and doing yoga on the beach.
Share this article with your friends!
AD
By using our site you agree to our use of cookies to deliver a better experience.
Accept
Decline
MORE FROM MERRY JANE