According to the Daily Mirror, the potato chip purveyors will release a new flavor this month designed specifically to get you in the mood. The “aphrodisiac” chips — or crisps, as they’re called in the UK — will combine honey and chili flavoring that Tyrrells says will “get pulses racing” in time for Valentine’s Day.

If you’re to believe Tyrrells press release, the honey of the chips will be "tinkering with hormone levels,” while the chili punch adds a tingle to the tongue that trigger nerve endings, boosts endorphin levels, and heightens heart rates. Just make sure you wash your hands in between activities. 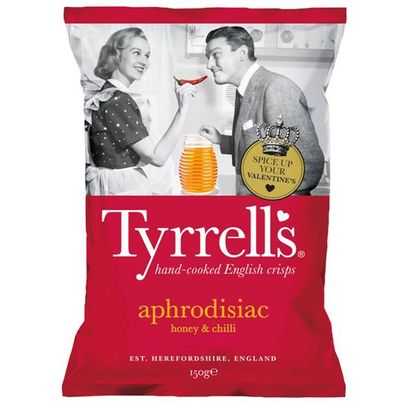 "Our new honey and chilli variety has an extra special place in our hearts as it is the first crisp with aphrodisiac properties that's ever been created,” Tyrrell marketing manager Sarah Lawson said, according to the Mirror.

Sadly, it is not yet clear if the limited edition munchies will be available outside of the United Kingdom, so to American lovers looking for a dual-use stimulant in the kitchen and the bedroom, you may need to resort to its closest US equivalent — Romeo’s BBQing With My Honey flavored Rap Snacks. We’re pretty sure they’ll accomplish the same goal.

NEWS
MUNCHIES
UK
HUMOR
MORE...
Zach Harris
FOLLOW
Zach Harris is a writer based in Philadelphia whose work has appeared on Noisey, First We Feast, and Jenkem Magazine. You can find him on Twitter @10000youtubes complaining about NBA referees.
Share this article with your friends!
AD
By using our site you agree to our use of cookies to deliver a better experience.
Accept
Decline
MORE FROM MERRY JANE