Legislators in Mexico have missed their deadline from the country’s Supreme Court to regulate cannabis three (3!) times. Now, judges may be taking matters into their own hands. On June 28th, the high court will discuss declaring the prohibition of cannabis consumption unconstitutional, and eliminating pertinent laws against its use from the books.

Cannabis activists are already in conflict with Mexico City police over their support of the potential declaration, which they see as the most likely avenue to legalize cannabis and support the right to puff.

On Monday afternoon, Plantón 420, a group of user advocates who have occupied the plaza in front of the Mexican Senate since early 2020, were halted by hundreds of police officers when they attempted to establish a second protest camp in front of the Supreme Court. 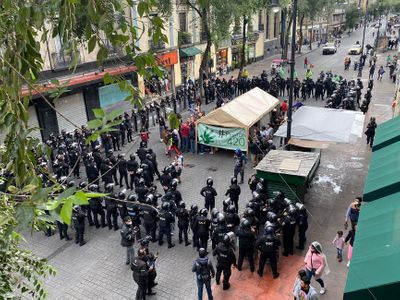 They hoped to occupy the space until judges voted in favor of declaring the ban on cannabis consumption unconstitutional, activists stated in a flyer.

But the contingent, bearing a tent that would serve as the new camp’s first structure, ran into a full police cordon on the march from the Senate. The peaceful protestors were surrounded by officers that far outnumbered activists and kettled for hours on Avenida 5 de Mayo in the Centro Histórico neighborhood, before being forced to return to their starting point. They were promised meetings with officials from the court the following day.

In 2018, the Mexican Supreme Court ruled that prohibition of cannabis consumption and personal cultivation violated the constitutional right to develop one’s personality. In the US legal system, that would be enough to change marijuana laws, but in Mexico, Supreme Court decisions must be legislated by Congress to take effect.

But Congress is having a rough time getting pro-cannabis laws on the books. The Senate asked for two deadline extensions from the high court and simply let the last one run out without asking for any extra time.

Many think that with the country’s June 6th legislative elections looming, President Andrés Manuel López Obrador’s Morena Party — which holds a majority in both houses of Congress — did not want to be seen as supporting marijuana in a time in which 60 percent of Mexicans are opposed to the drug’s legalization.

Things got especially weird when the president made a public, pre-election announcement that he is a Christian. Christian groups are not known for supporting drug decriminalization or legalization in the country.

Thankfully for Mexican marijuana consumers and cultivators, the Supreme Court may make moves to step in for Congress’ inaction.

Declaring a law unconstitutional that’s been on the books as long as cannabis prohibition has is an unusual occurrence in the Mexican legal system. Eight of the 11 Supreme Court judges would have to vote to declare the ban unconstitutional for the movement to succeed — a number that will be difficult to reach, particularly given that many of the justices are seen as being closely allied with the president.

Ricardo Monreal, Senate leader of the Morena Party, previously predicted that such a ruling — which would simply strike regulations from the books without putting guidelines to regulate consumption in place — would cause “chaos.”

Should the court decide to rule cannabis prohibition unconstitutional, it would entail striking five articles from the General Health Law ( known as Ley General de Salud) that relate to the consumption of cannabis. Judges will have to decide whether that decision would apply to previous crimes.

Like the court’s 2018 decision, the ruling of unconstitutionality would not legalize a commercial cannabis industry — nor the production of cannabis, either at home or by a business, nor sale or distribution of the plant.

Caitlin Donohue
FOLLOW
Caitlin Donohue is a Bay Area-raised, Mexico City-based cannabis writer and author of She Represents: 44 Women Who Are Changing Politics and the World. Her weekly show Crónica on Radio Nopal explores Mexican marijuana culture and politics in the prohibition era. Follow Caitlin on IG @byrdwatch.
Share this article with your friends!
AD
By using our site you agree to our use of cookies to deliver a better experience.
Accept
Decline
MORE FROM MERRY JANE