NEWS
Mexico's New Data Project Details What Buying Weed Is Actually Like in the Country
AD
The data looks at everything from how much weed costs throughout the country to the relationships people have with their dealers, and so much more.
Published on February 3, 2021

Media traditionally paints Mexico as being a major supplier of cannabis. To a certain extent, that’s fair. The country sold tons of marijuana to it’s northern and southern neighbors — and their neighbors — until recently. But, as the Mexican legislature slowly produces regulation that will finally legalize recreational cannabis, that perception needs to change — fast.

Mexico is about to become the world’s largest marijuana market. It’s time to ask the question: Who is buying what weed, and for how much?

“The only way to know how much people are paying in the illegal market is to ask them,” says one of the coordinators of data project Los Precios de la Marihuana [The Prices of Marijuana], Mexico City journalist José Luis Martínez Limón. (Hear our full interview on my Spanish language radio show Crónica.)

The project asks the country’s cannabis consumers to fill out a 15-question online poll about their purchasing habits, collecting information on users’ location, age, gender, level of education, their relationship with their weed dealer, how much they spend and how often, how they get it, and other facets of the weed purchasing experience.

Its aim is to amass standardized information about the Mexican cannabis industry that can later be published in a peer-reviewed academic journal, and used by officials to formulate public cannabis policy. 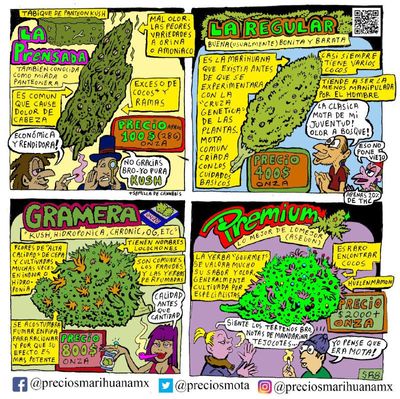 Information on cannabis in Mexico has often been restricted, sometimes due to the danger of publishing information related to the drug cartels whose operations tend to blur with those of corrupt government and military officials.

Other times, censorship comes point-blank from the federal government itself.

In 2015, marijuana magazine Cáñamo, which was founded in Spain, and publishes editions throughout Latin America, found itself the subject of a censorship attempt. Mexico’s Department of the Interior, which classified the publication as “illicit” for supposedly encouraging cannabis use. (The magazine summoned a legal team, however, and fought the charges to continue publishing.)

Despite this history, a 10-question pilot version of the Prices of Marijuana poll was concluded in 2019, and the current edition started in July of 2020. Its website updates its findings on price points by state in real time. You can check out selected findings on the project’s Instagram page, as well as non-scientific polls about dealers’ delivery costs and comics illustrating the four quality tiers of Mexican weed.

As of Tuesday, this edition of the poll has found that consumers pay on average 38 pesos (approximately $1.89 USD) per gram. That figure ranges from 91 pesos ($4.52 USD) in Baja California to 33 pesos ($1.64 USD) in the central Pacific state of Michoacán.

Limon Martínez attributes those two extremes to the likelihood that consumers are buying high-grade nugs brought down from California in its border-neighbor Baja California. Michoacán’s relatively low price point is likely due to the quantity of cannabis that is grown there.

He says that such data is going to be key for legislators in setting up cannabis policy that makes sense. After all, if the primary goal of legalization in Mexico is to diminish business for the cartels, you don’t want to price legal weed so high as to discourage people from buying it. You know, like what they’ve done in California’s legal cannabis market, where the illicit market reigns supreme over legal dispensaries.

“If this regulation is going to affect users, it should take the users into account,” says Limón.

MEXICO
DEALERS
DATA
SALES DATA
MORE...
Caitlin Donohue
FOLLOW
Caitlin Donohue is a Bay Area-raised, Mexico City-based cannabis writer and author of She Represents: 44 Women Who Are Changing Politics and the World. Her weekly show Crónica on Radio Nopal explores Mexican marijuana culture and politics in the prohibition era. Follow Caitlin on IG @byrdwatch.
Share this article with your friends!
AD
By using our site you agree to our use of cookies to deliver a better experience.
Accept
Decline
MORE FROM MERRY JANE