NEWS
Mexico’s First Ever Weed-Themed TV Show Is About to Debut This Weekend
AD
"Tiempo de Cannabis" (Cannabis Time) has well-known legalization activists on board and will push back against any alarmist portrayals of the plant.
Published on February 24, 2021

With the February 27 debut of Tiempo de Cannabis (Cannabis Time) on Mexican channel adn40, marijuana will arrive in the country’s living rooms, which is yet another indication of Mexico’s impending federal legalization. The first Mexican weed-themed broadcast television show will present a much-needed educational take on the drug’s usage and surrounding culture.

Tiempo de Cannabis team is comprised of well-known legalization activists. Zara Snapp, a political scientist whose drug policy work has put her at the center of the country’s cannabis legalization movement, will host the weekly series, which is set to run 13 weekly episodes and will be available on Apple TV, Roku, and Prime Video.

“The idea of this program is to speak about the gifts, the benefits of the plant,” says Snapp, in an interview for my Spanish language radio show Crónica. “It’s not about having a debate. This is about sharing the evidence that we have, speaking about responsible consumption, speaking about our community.”

That science-based, consumer-friendly approach represents a big change from how the drug’s consumption has largely been portrayed on the country’s television screens.

“The first thing that comes to mind are all those anti-drug campaigns that [TV Azteca] did, which was the ‘Vive Sin Drogas’ [‘Live Without Drugs’] campaign,” says Brenda Hernández, Tiempo de Cannabis’ content coordinator, when asked about her first memories of cannabis on TV.

Those classic PSAs have run for over two decades. The most famous one features a cheerful, rainbow-petaled flower rejecting drugs handed to them by a blood-shot dude in a beanie hat who keels over before the ad is done.

“It had that jingle that I think we all wound up learning,” continues Hernández, who also runs the popular, women-focused cannabis education platform Chicks Vs Estigma. "But I think the perspective of the campaign was something similar to what we see in the media today, a tactic of informing to disinform.”

The show is an expansion of a recurring segment by the same name that ran on journalist Mónica Garza’s morning show, which also airs on channel adn40.

Mexicans have also been bombarded with Reefer Madness-inspired visions of marijuana disaster by the Catholic drama series Rosa de Guadalupe, which has over 1,500 episodes. The characters in the show fall into stonerdom, which ultimately leads to tragedy — hospitalizations, arrests, and uncontrollable addiction (of course).

Such alarmist propaganda is sometimes echoed by Mexican President Andres Manuel López Obrador. Over the course of his term, the president has conferenced with Christian evangelical groups about airing subsidized public service announcements pushing “Just Say No”-type messages, while also promoting such language himself. More recently, his administration has released ads linking drug use with family dissolution and extreme poverty under the slogan: “In the world of drugs, there’s no happy ending.” 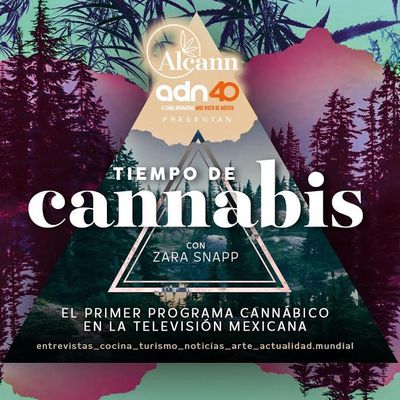 What makes this prohibition-minded messaging particularly frustrating for many advocates is that there is a serious need for cannabis education. Mexico released its medicinal cannabis regulations in January, and there is no comprehensive plan to teach health professionals about the plant’s therapeutic usages, which has left patients in the lurch.

But after decades of the general public being force-fed “just say no to drugs” scare messaging, the team behind Tiempo de Cannabis knows the show’s debut on a channel available on every TV set is a big step forward.

“The media has this great power to make people change their mind,” says Hernández.

Snapp agrees. “We want there to be less fear about speaking on these subjects in the rest of society,” she says.

CULTURE
WAR ON DRUGS
MEXICO
POP CULTURE
MORE...
Caitlin Donohue
FOLLOW
Caitlin Donohue is a Bay Area-raised, Mexico City-based cannabis writer and author of She Represents: 44 Women Who Are Changing Politics and the World. Her weekly show Crónica on Radio Nopal explores Mexican marijuana culture and politics in the prohibition era. Follow Caitlin on IG @byrdwatch.
Share this article with your friends!
AD
By using our site you agree to our use of cookies to deliver a better experience.
Accept
Decline
MORE FROM MERRY JANE