NEWS
Man Serving Life in Prison for Two Baggies of Weed Released After 12 Years
AD
Fate Winslow of Shreveport, Louisiana, received a life sentence after getting busted with just $20 of cannabis. After a lengthy appeals process, he’s now a free man.
Published on December 17, 2020

Imagine catching life behind bars just for handing off two dime bags worth of weed. Not for dealing the weed. Not for growing it. But simply for acting as a middle-man to pass it from seller to buyer.

That’s what happened to Fate Winslow back in 2008. But on Wednesday, he was finally released from Louisiana State Penitentiary after a successful resentencing hearing. Now 53 years old, he served 12 years of that life sentence.

“Today is a day of redemption,” Winslow wrote to Yahoo News earlier this week. “I get my freedom back, I get my life back. There are no words that can really explain my feelings right now.” 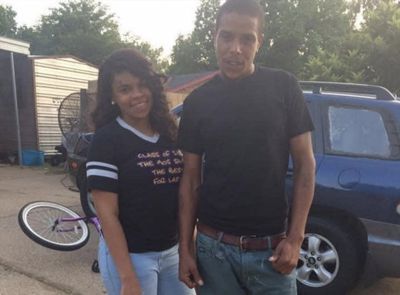 Fate Vincent Winslow with his daughter Faith Winslow Canada prior to his incarceration in 2008. Image via

How does an American end up in prison for life over $20 of weed? Louisiana state law features a three-strikes rule, a grossly misguided ‘90s era policy that imposes life sentences — without parole — on any repeat offender who receives three nonviolent felony convictions within a 12-year period.

In 2008, while Winslow was homeless, an undercover police officer approached him in a park. The officer asked Winslow if he could score $20 worth of weed. Winslow took the cash and later returned to the officer with two tiny bags of bud, leading to his immediate arrest for dealing drugs.

The thing is, Winslow wasn’t actually a dealer in any legal sense. He simply acted as a middle-man, who told police he brokered the deal so he could make a $5 commission — offered by the undercover cop — to buy some food.

The man who reportedly dealt the weed was white and was not arrested, even though police discovered the marked $20 bill on him. Winslow is Black.

Over the years, Winslow became one of the faces of the ACLU’s Innocence Project, an organization devoted to helping nonviolent offenders overturn their life sentences caught from three-strikes policies. His appeals attorney, Jee Park, first learned about him after reading his story at The Daily Beast.

“Rolling Stone magazine did articles about me,” Winslow told a CBS News affiliate. “I was in a bunch of other articles and two documentaries. The other inmates could never believe it. They always said, ‘You’re doing life for a bag of weed?’”

As fate would have it, Winslow was fortunate, insofar as a man who lost 12 years of his life over a handful of bud could be considered fortunate. Park took on his resentencing case pro-bono and successfully argued that the Louisiana court unfairly misrepresented him.

During Winslow’s criminal trial, his public defense attorney, Alex Rubenstein, never told the court that he was homeless at the time, nor did Rubenstein mention that Winslow only acted as a runner for the weed deal. When Winslow requested a new attorney, the judge presiding over the case rejected his request.

“There are hundreds of individuals serving life sentences for nonviolent crimes in Louisiana,” Park said. “He received an obscenely excessive sentence given his life circumstances and crime, and today, we are correcting that unconstitutional, inhumane sentence.”

Park greeted Winslow at the gates of the Louisiana State Penitentiary when he was released on Wednesday.

Now, as a free man, Winslow will reunite with his kids and grandkids. His daughter, Faith Winslow Canada, set up a GoFundMe campaign to help him transition into his new life. Until then, he plans to live with her at her apartment in Shreveport.

“My dad and I got closer while he was imprisoned. Even though he was locked up, he was there for me when I needed him,” she told Yahoo News. “He deserves a second chance, and I am so glad he is getting one.”

Louisiana, once dubbed the “Prison Capital of the World,” used to have the nation’s highest incarceration rate. As of 2018, its incarceration rate is now only the second highest, next to Oklahoma. The state also made significant strides over the past decade to reform its harsh cannabis laws, including reducing sentencing for nonviolent weed offenses.

In 2016, Louisiana rolled out a limited medical marijuana program that permitted only edible or topical forms of cannabis. After four years, the state expanded its program to include some inhalable forms and legal medical cannabis deliveries.

To learn more about the ACLU’s Innocence Project, visit its website

NEWS
CRIMINAL JUSTICE REFORM
SOCIAL JUSTICE
CANNABIS CONVICTIONS
MORE...
Randy Robinson
FOLLOW
Based in Denver, Randy studied cannabinoid science while getting a degree in molecular biology at the University of Colorado. When not writing about cannabis, science, politics, or LGBT issues, they can be found exploring nature somewhere in the Rocky Mountains. Catch Randy on Twitter and Instagram @randieseljay
Share this article with your friends!
AD
By using our site you agree to our use of cookies to deliver a better experience.
Accept
Decline
MORE FROM MERRY JANE