NEWS
Las Vegas’ New Weed Museum Has a Bud-Filled Swimming Pool, World’s Biggest Bong
AD
There won’t be any real weed on site, but Sin City’s new “Cannabition” will take visitors on a lit trip through marijuana history and culture, cementing Vegas as a destination for THC tourists.
Published on September 20, 2018

The latest tourist attraction to open on the Las Vegas strip has nothing to do with craps tables, showgirls, or electronic dance music.

According to the Associated Press, “Cannabition,” Las Vegas’ first marijuana-themed museum, will open to the public today, September 20th, offering guided tours through a human-sized cannabis forest, mock grow rooms, and a look at “bongzilla,” a 24-foot tall water behemoth being billed as the world’s largest water pipe. 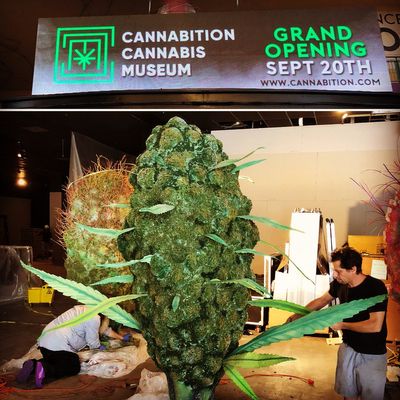 Adult-use cannabis has been legal in Nevada since the summer of 2017, but thanks to local social-use laws, smoking the sweet leaf is strictly prohibited inside the museum. Still, as local pot shops report steadily growing profits outpacing any pre-legalization predictions, the new exhibit is yet another notch in the Silver State’s incredibly rapid ascent to the upper echelons of cannabis culture.

"Our goal when people come out of this is that they don't fear the cannabis industry if they are not believers in the industry," Cannabition founder J.J. Walker told the AP. "Cannabition is not about just serving people that like marijuana, it's about serving the masses that want to learn about cannabis or just have fun and go do a cool art experience."

Last year, Nevada legislators and cannabis regulators made waves by foregoing a traditional waiting period between legalization and cannabusiness implementation, rolling out recreational pot shops just six months after voters approved a legal weed ballot measure. In the 15 months since, the Southwest vacation hub has turned into one of the country’s biggest state-approved cannabis markets, with Las Vegas leading the Silver State green rush charge.

In addition to gawking at a massive bong, Cannabition visitors will encounter a swimming pool filled to the brim with fake flower, six-foot-tall buds, and educational information about marijuana history and science, all brightened by black lights, neon, and other social media-friendly visuals.

It may not be the Met, but Cannabition creators are confident that the mix of photo opportunities, psychedelic art, and educational information is in line with current museum trends, where experts say that stuffy exhibits and strict oversight have quickly become a thing of the past.

"Once cellphones became ubiquitous, the culture of museum visiting changed," Gwen Chanzit, director of museum studies in art history at the University of Denver, told the AP.

NEWS
420
LEGALIZATION
NEVADA
MORE...
Zach Harris
FOLLOW
Zach Harris is a writer based in Philadelphia whose work has appeared on Noisey, First We Feast, and Jenkem Magazine. You can find him on Twitter @10000youtubes complaining about NBA referees.
Share this article with your friends!
AD
By using our site you agree to our use of cookies to deliver a better experience.
Accept
Decline
MORE FROM MERRY JANE