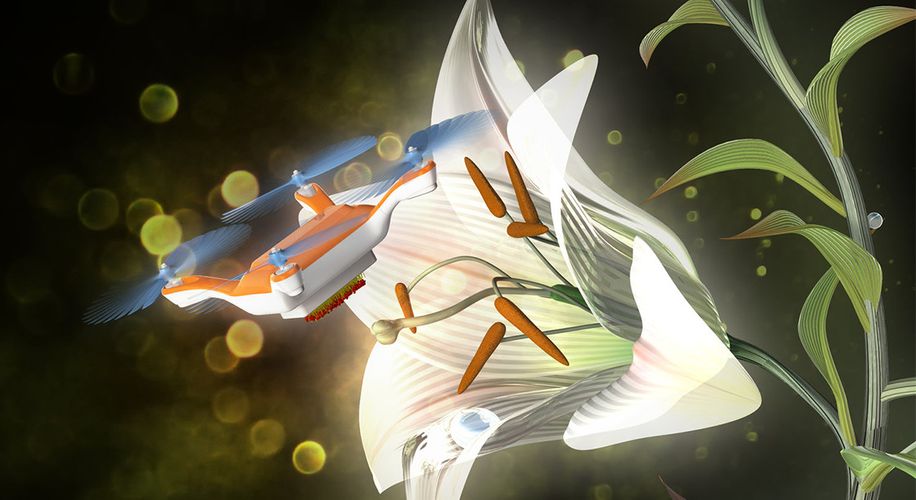 You may think of bees as dastardly little insects, producing honey and stinging everything in sight. But in reality, these terrifyingly tiny creatures are critically important to the agricultural industry and overall ecosystem. They help to pollinate a wide range of fruits and vegetables that would otherwise be doomed without them. Some bees have even been trained to produce "cannahoney" from marijuana resin.

But bees are in trouble. The U.S. lost 44 percent of all its honeybee colonies last year, while some other species are nearing mass extinction. And while you might’ve seen some knee-slapping memes about it, this glaring issue is nothing to laugh about. It isn’t just America - across the world, bees are dying at an alarming rate.

One researcher from Japan's National Institute of Advanced Industrial Science and Technology, Eijiro Miyako, is working on a magnificently innovative solution to help compensate for the dwindling bee population. He has developed an insect-sized drone capable of artificial pollination using ionic liquid gel, a specialized substance known to have long-lasting "lift-and-stick-again" adhesive properties.

This miniaturized drone is equipped with a patch of horse hair bristles and coated with the gel material, allowing the robotic bee to lift pollen from one plant and transport it to the next. His team has already tested the gel to ensure that is was biocompatible and harmless to other natural creatures like ants.

In one experiment, Miyako put droplets of the ionic gel on a group of ants and placed them in a box of tulips, while the other subset was left untouched. The research showed that the ants with the sticky substance were able to collect pollen for the flowers. Additional tests hinted that the gel also provides a camouflage effect, which could be helpful for pollinators trying to avoid predators.

After his live-sample experimentation, Miyako started to think of ways to fuse his findings with drone technology. At the moment, the insect-sized drone would be commercially available for around $100 each. This relatively high-cost could prove to be a major obstacle, as some farmers require millions of bees to pollinate their crops.

Miyako is also looking to automate his technology, integrating artificial intelligence, GPS, and a high-res camera on his forthcoming prototypes. While his bee-sized drone might seem a ways away from actualization, the potential for robotics in the agricultural sector is definitely immense.

At the end of the day, the best solution is to protect the natural pollinators that are still buzzing around our earth. These drones might not be an end-all solution, but they could someday assist these endangered bee species with the grueling and vital task of pollination.