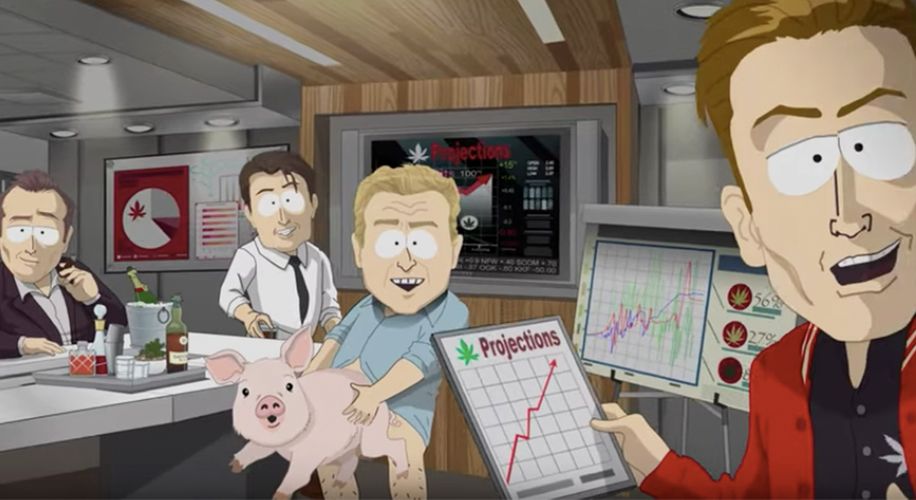 Is South Park’s Parody of MedMen a Foreshadow of Deeper Ties to Legal Weed?

The cartoon’s fictional pot farm, Tegridy, started as a satirical poke at Big Weed. But recent marketing moves may be hinting at the show’s future ambitions for the pot industry. Maybe.

The cartoon’s fictional pot farm, Tegridy, started as a satirical poke at Big Weed. But recent marketing moves may be hinting at the show’s future ambitions for the pot industry. Maybe.

Tegridy Farms started when one stalwart Coloradan, Randy Marsh, became fed up with big-wig, corporate-cannabis types hijacking the Lord’s good weed for mere profits and a little fame. Unlike the moneyed cannabis operations, Tegridy Farms only provides fresh, no-frills cannabis grown from Mother Earth’s soily bosom, with a little sweat from honest work, and a whole lot of heart.

The only thing is, Tegridy Farms isn’t real. At least, it’s not real yet.

Created for last year’s South Park episode of the same name, Tegridy Farms was originally a dig at the explosive rise of so-called Big Weed – massive, multi-million-dollar cannabis retail chains that have begun swallowing up the burgeoning industry’s original mom-and-pop pot shops. A play on the word integrity, Tegridy became yet another of South Park’s ubiquitous catchphrases, a mocking soundbyte that satirizes its subject while simultaneously acknowledging its widespread influence.

Last weekend, the South Park Studios YouTube channel premiered a faux Tegridy Farms commercial that parodies a Spike Jones-directed ad from the California-based reefer retail chain MedMen. MedMen caught flak last year for lobbying to ban marijuana home grows in New York State, and it’s been in the news for hemorrhaging millions in investments as it attempts to leapfrog its revenues by wantonly opening new locations.

In the parody spot, Randy Marsh narrates, “And then a bunch of young corporate banker types come along telling us we’re all in the ‘new normal’ as they try to turn God’s green miracle into an easy buck for themselves.”

“They even hire fancy Hollywood directors to make them look all hip and cool. But you know what? Fuck those guys. They ain’t got no integrity,” he continued. “Do you want some fuckin’ Tegridy? Don’t you wish everyone had some goddamn Tegridy?”

Even Towlie, the perpetually stoned, anthropomorphic bath towel, makes a guest appearance in the joke ad.

South Park isn’t exactly known for being a neutral observer. The show’s creators, Trey Parker and Matt Stone, have blasted just about every celebrity, political issue, and social demographic in the US. And considering that the edgy cartoon is based in a sleepy Colorado town, it was just a matter of time before the showrunners roasted the nation’s legal pot industry.

But the joke didn’t end there.

A little digging by Kyle Jaeger at Marijuana Moment revealed that South Park is taking this Tegridy thing way beyond some YouTube clips. Last year, the South Park Twitter account listed the weed strains mentioned in the episode, including Catatonic Tegridy Bud. All mentioned strains now have official domains on the web.

Additionally, since Tegridy’s TV debut, someone registered “Tegridy Farms” as LLCs in Colorado and Oregon. (Jaeger couldn’t confirm if it was actually the guys behind South Park.)

Someone also purchased a web domain for Tegridy Farms, which only features the faux TV spot and an email subscription field. A Tegridy Farms Instagram account announced in December that Tegridy weed would be “coming soon to a giant online retailer near you.”

Coming soon to a giant online retailer near you.

Could South Park be hinting at its entrance into the weed industry? Could we finally, truly, get some goddamn Tegridy already? That’s a suspicion both Marijuana Moment and Denver’s Westword flirted with, but it could just be clever marketing for the show. After all, the “online retailer” line from Tegridy’s Instagram could indicate the launch of non-weedy Tegridy swag like t-shirts, since online orders and weed delivery services aren’t yet permitted in Colorado. Weed deliveries are allowed in Oregon, however.

Or who knows? Maybe South Park is biding its time and waiting on Colorado’s weed delivery law to go into effect, which begins for medical marijuana in 2020. Recreational shops can begin deliveries in 2021.