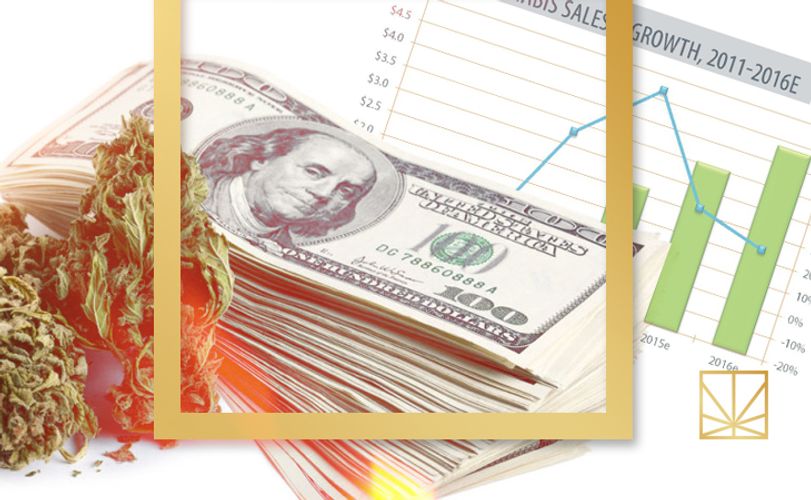 Is Cannabis the Fastest Growing Industry in the US?

There's a lot of money in cannabis, and people are just now figuring that out.

There's a lot of money in cannabis, and people are just now figuring that out.

There was always a prediction that, if legalized, the cannabis industry would become huge. Now, we see, this prediction has become reality, and it is all in the numbers. According to the ArcView group, a networking/research firm led by Troy Dayton and Steve DeAngelo, legal sales rose from $4.6 billion in 2014 to $5.4 billion in 2015. Although these numbers are from both medicinal and recreational sales, what has made the difference is the recreational use in Colorado, Washington, Alaska, and starting in 2015, Oregon and D.C. According to the same research, recreationally legalized sales surged from $351 million in 2014 to $998 million in 2015 alone.

Considering these high and ever growing numbers, entrepreneurs are quickly jumping into the industry. Colorado and Washington were the country’s guinea pigs; they proved that cannabis commerce has the potential to not only increase state tax revenue, but encourage consumerism and make mass-profit. Although, these businesses are not just dispensaries. Selling edibles, extracts, tinctures, vaporizers, beauty products, and even clothing—the money making nature of this industry has given way to a new, and somewhat elitist, cannabis culture. Did you buy the new Pax vaporizer? Have you tried the cannabis-infused lubricant, Floria? Using cannabis is no longer only buying a bowl or rolling a joint. In fact, Washington saw edible and extract sales reach up to the hundreds of thousands in one month!

86% of Americans live in a state that allows either medicinal or recreational use, and seven states—California, Nevada, Arizona, Massachusetts, Maine, Rhode Island, and Vermont—could legalize recreational use in 2016. We, at MERRY JANE, can hear the cash flowing in. But, there are some dangerous prospects with such a fast-growing industry, and most notably, a technically illegal industry. Since cannabis is federally illegal, business owners are prohibited from deducting the cost of cannabis, which makes keeping small businesses afloat, in the midst of increasing competition, difficult.

Another consequence of the flourishing industry? Increased prices. Yep, as the competition continues to heighten between sellers, both wholesale and retail prices will spike in 2016. Nevertheless, the industry’s growth, in not only numbers but effect it has on widespread legalization in our country, is thrilling. In a video released by the ArcView Group and titled, “Cannabis: The Next Great American Industry,” it is said, “These are historical moments. What’s happening now is going to be looked back on when this is an $80 billion dollar industry in 10, 12, years from now. People are going to look back, and they are going to say, “Who was there at the very beginning? What was happening? What was it like to be there?” Get ready, 2016 is expected to be a momentous year.

Via: CNBC, The ArcView Group

Isabel is a student at Eugene Lang College the New School for Liberal Arts in New York City and is studying non-fiction writing, dance, and contemporary music. She is originally from Los Angeles - the Valley to be exact - and although she loves NYC, her alliance is with the West Coast. In her free time Isabel likes to dance in front of the mirror, listen to music, and smoke cannabis.