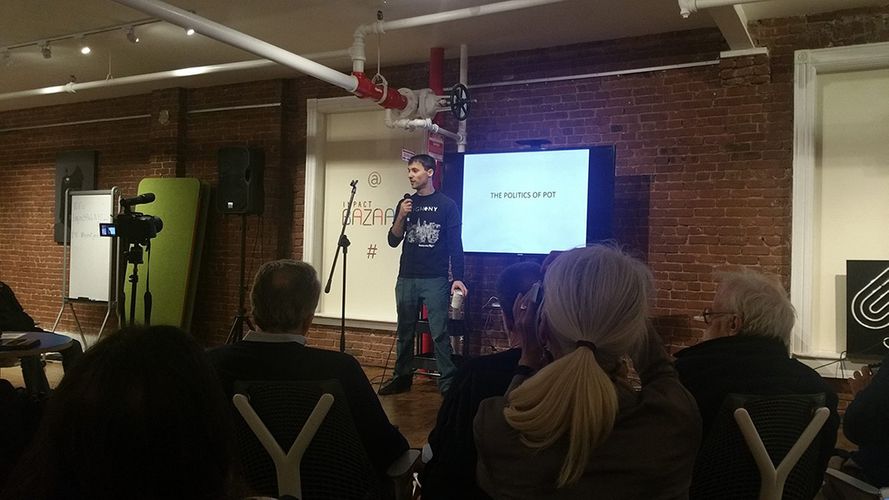 MERRY JANE sat with the founder of an East Coast initiative to learn more about the cannabis space.

MERRY JANE sat with the founder of an East Coast initiative to learn more about the cannabis space.

High NY is an organization based in New York City that is committed to changing the ways in which society views and uses cannabis. Recognizing the importance of cannabis, it’s industry, and an unwillingness to talk about it (especially in NYC), High NY holds monthly meet-ups to build a community of cannabis leaders in both entrepreneurship and reform. We talked to Michael Zaytsev, one of High NY’s founders, to learn more.

MERRY JANE: How did High NY get started?

Michael Zaytsev: My high school buddy, Josh, started it. He’s a tech entrepreneur, and he’s never tried cannabis. Originally, his vision was to create a New York tech meetup equivalent for the cannabis community. When I came to the first event, I met long-time activists and true medical patients. I really didn’t know about any of that stuff. I was initially attracted by the opportunity for entrepreneurship in a proven multi-billion dollar industry. Though, the more I learned about the plant and it’s history, the more I understood that this thing —ending Cannabis prohibition— had much more important implications than making money. At first, I was very hesitant to get involved and put my name out there. When I would go talk to venues, go talk to people— even my friends who are cannabis users— everyone would say, “Oh, you can’t!” I was shocked how uptight New York was. I went to school in SoCal, worked in Silicon Valley, lived in San Francisco, and no one there cared. Here everyone smokes, but they can’t talk about it. It’s so taboo. I was disappointed in New York, honestly.

MJ: In High NY’s beginnings, was it hard getting people to come to events? Were people hesitant to openly acknowledge they smoked cannabis?

MZ: We never had a problem getting people to events; people are really passionate about this movement. When I stepped in the events were free and held in bars because we could get free space there. Eventually, Josh and I decided to approach tech co-working spaces. Although the tech industry claims to be very progressive, we got rejected a lot before we found venues to partner with. For us, it was always about getting tech-entrepreneurs to look at the industry. The cannabis world hasn’t had access to tech companies, and tech innovation, in the ways every other business has in the last 20, 30, years

MJ: When you realized tech and cannabis was an obvious pairing, what did you envision, or still envision, when uniting the two industries?

MZ: As an industry in it’s infancy, legal Cannabis is a hotbed for entrepreneurship. The tech world champions entrepreneurship and innovation, which is  something the cannabis industry very much needs. So, my initial thought was to do entrepreneurship education; teach people who have the passion and energy. I view Cannabis as a global technology. It’s a powerful tool for humanity to hack, leverage, and innovate with. Through High NY, we hope to bridge the gap between the cannabis and tech industries, promote collaboration, and improve the way humans utilize plants in general.

MJ: How do you plan to do that?

MZ: With education and conversation. People in New York don’t even want to talk about it. I just want people to have the conversation, and to be armed to have the conversation. So, in addition to entrepreneurship education, our focus also includes cannabis awareness and cannabis education. We bring in industry leaders to make sure our High NY community is armed with the knowledge to have productive conversations and lead by example. We’ve created a space for like-minded people to connect and have meaningful conversations, which wasn’t happening at all. Now, our focus has shifted towards getting people outside of the cannabis world, who aren’t cannabis users, to come to an event. We want them to learn real information and challenge the propaganda they’ve received over the years.

MJ: Do you think promoting the cannabis lifestyle is important to ending the stigma? Or, just the facts? Or, a combination of both?

MZ: I’m tempted to say both. I think it’s important to lead with the facts, especially because there are a lot of people who are anti-cannabis and just don’t know the facts. As far as the lifestyle, I think it’s important for people who are cannabis users to at least have an awareness of the fact that they’re representing a lifestyle. It’s important for the lifestyle to be represented in an intentional and mature way. I’ve found the cannabis community to be creative, tolerant, and compassionate. In my opinion, that’s a lifestyle is worth promoting. Let’s promote all the hard-working and intelligent cannabis users who contribute to society, and let’s unlearn the stoner stereotype.

MJ: Do you feel it’s difficult to live a cannabis lifestyle in New York City?

MZ:  Not for me; I’m white! Is it difficult for people of color or patients without access to medicine? Absolutely. Otherwise, cannabis is  abundant here. There are so many delivery services that are well-oiled and, I would guess, multi-million dollar businesses. So, it’s not difficult, but it bothers me that something I can legally do in California and Colorado is illegal here. It also bothers me that because it is illegal, I can’t enjoy cannabis in a public and social setting, like a bar.

MJ: If cannabis were to become federally legal, how do you see science, tech, and art conflating with cannabis? Do you think it could drastically change those markets?

MZ: Well, science for sure. We are going to see so much bio-tech innovation. Once people actually begin understanding the intricacies of the human endocannabinoid system, and scientists are able to conduct quality research, I think we’ll see even more cannabis-related breakthroughs in medicine. As far as the art world... It’s no secret that art and cannabis are enjoyed hand in hand; a lot of creatives use cannabis in their process. To me, this is a natural thing that already exists and it will be nice to see that live openly. Last month we hosted the New York City Cannabis Film Festival and the whole point was to celebrate creativity. If this is something that enhances creativity for people, they should be able to come together and celebrate that.

MZ: Some favorites are Trainwreck, Girl Scout, Blue Dream, Jack Herrer, and New York sours, of course— I grew up on those! But, now that I’m way more educated, I’m like, “Was this organically grown? Did this have pesticides on it? Was this flushed correctly?”

MZ: I really like them all.  I love a joint because it’s so social. Who doesn’t love a fat blunt? If I’m trying to be productive or do chores, I like the bong, but now I vape a lot more than I smoke. So basically, I like them all.

MJ: Favorite music to listen to while smoking?

MZ: Yeah, Biggie over Tupac. Both are legends though.

Isabel is a student at Eugene Lang College the New School for Liberal Arts in New York City and is studying non-fiction writing, dance, and contemporary music. She is originally from Los Angeles - the Valley to be exact - and although she loves NYC, her alliance is with the West Coast. In her free time Isabel likes to dance in front of the mirror, listen to music, and smoke cannabis.