NEWS
Higher Edu: University of Cincinnati Now Offers Pot Studies Certificate Program
AD
The program will examine historic facts, cultural issues, societal mores, and legal regulations as they pertain to cannabis both as a plant and as an industry.
Published on October 16, 2020

Talk about higher education! The University of Cincinnati (UC) now offers a cannabis studies certificate and, as such, it’s one of the first United States learning institutions to do so.

After attending a 2018 conference in California that included a wealth of information regarding cannabis, Trusty came up with a course titled Introduction to Hemp and Medical Cannabis. She has been teaching that class at UC for the past three semesters with great success. From there, the idea for a full certificate program just grew organically (ahem).

And it all started because she had a bunch of cannabis professionals come in and speak to her students. "I developed this course, and all of these people were coming in and talking to the class and they said, 'Hey, you know, wouldn't it be great if we could expand on this and make a certificate out of it? [A program] where a student who is already majoring in a field that they are passionate about — like business or horticulture or whatever — that they could tie that into the horticulture industry.’”

It wouldn’t have happened, she explained, without her colleagues and peers pointing out that she had something deeper going on. “It really was these other UC professors saying 'I have a class that if you were to offer this as a certificate, that would work.' That was the stimulus to put this certificate together.”

The program approaches cannabis as a multi-layered topic, addressing it both as an ancient natural plant and as a skyrocketing nascent business that’s on the precipice of changing industry on the world stage. The topics covered include the historic, cultural, societal, and regulatory aspects of cannabis, with experts in fields such as botany, biology, anthropology, medicine, fashion, and political science contributing to the curriculum.

And, because the business of cannabis is booming, the program keeps the post-college job market in mind.

“There are so many [jobs],” Trusty said about the current state of the weed trade. “The first thing is, you need to grow it, so growers. Then, you need to harvest it and process it. Then, while you're growing, there is testing, so people work in testing labs. People process it, so what are you going to sell it as, or what are you going to turn it into once it's sold? So, we have people who are making oils, vape cartridges, and edibles. And then this is sold in a dispensary, so we have shop owners and people who work at the dispensary. When you have a business like that, you need business-people for advertising and other things.”

The UC program also includes rigorous studies of cannabis as medicine, and hemp as a multipurpose material with tons of practical applications. It also addresses the lingering stupidity of pot prohibition. 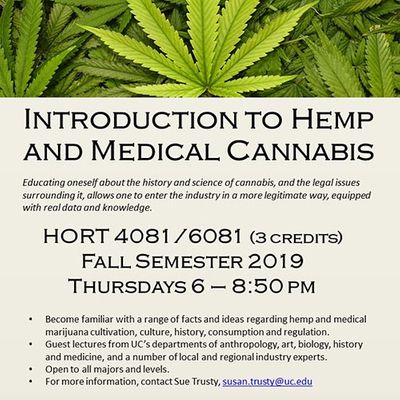 In fact, UC reportedly expressed concern over offering the certificate at first because cannabis remains federally illegal. There are dozens of universities that would never offer a single class on the topic over the same concern.

“There wasn't much happening when putting the certificate out,” Trusty said. “Now, I’m seeing very slowly, a few colleges around the U.S. are starting to offer a bachelor’s or associate’s [degree] in the lab work, but I actually don’t know any that are offering a cannabis certificate.”

The abundance of false information about cannabis, particularly on the Internet, is what finally pushed Trusty to make sure the program came to fruition.

"Because [cannabis] is illegal,” she said, “a lot of the information on it is just garbage and faux. There is not a lot of research-based information. The government and universities have avoided doing that kind of research because it's illegal.”

Trusty said she hopes the certificate will help eradicate the stigma surrounding the plant and continue to make higher education just that: Highly educational.

“As we get real research-based information out there,” she said, “and people realize what the advantages of growing and using cannabis for a variety of purposes is — and to not only just be hung up on the drug-uses of it — but to think of all the other things… I think all of that should go a long way towards making it less of a problem.”

OHIO
COLLEGE
SCHOOLS
MIDWEST
MORE...
Mike McPadden
FOLLOW
Mike McPadden is the author of "Heavy Metal Movies" and the upcoming "Last American Virgins." He writes about movies, music, and crime in Chicago. Twitter @mcbeardo
Share this article with your friends!
AD
By using our site you agree to our use of cookies to deliver a better experience.
Accept
Decline
MORE FROM MERRY JANE