NEWS
High Art: Richard Prince Launches First Artist-Branded Cannabis Line
AD
One of the most notorious figures in contemporary art has teamed up with 710 Labs to create Katz + Dogg, a line of flower, pre-rolls, and vape cartridges.
Published on June 3, 2019

A handful of California cannabis dispensaries will now embrace some high art, thanks to a new brand of bud backed by one of the most polarizing figures in the white cube world.

Richard Prince, the visual artist best known for bright, garish paintings and reappropriations of branded or public imagery, has teamed up with California cannabis brand 710 Labs for Katz + Dogg, a new line of flower, pre-rolls, and vape cartridges featuring Prince’s art on the packaging. 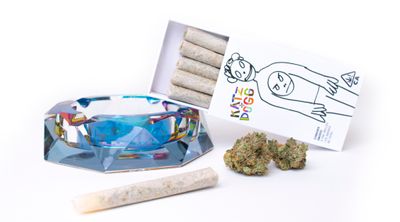 According to a press release, Katz + Dogg is the first cannabis company to tie the worlds of legal marijuana and high art, with Prince picking up the mantle from musicians, actors, and other celebrities as the first contemporary visual artist to connect his work to branded weed. Each Katz + Dogg box will feature work from Prince’s infamous “Hippie Drawings” and “High Times” painting series.

“It satisfies this idea of creating something or making something,” Prince told the New York Times about his new pot brand. “It’s not necessarily an accessory, but it’s not that different from making a T-shirt.”

Prince, who took a three decade tolerance break before returning to cannabis use, consulted with 710 Labs to pick three phenotypes bred for their mid-level THC content: Ice Cream Cake, OG, and Shire. 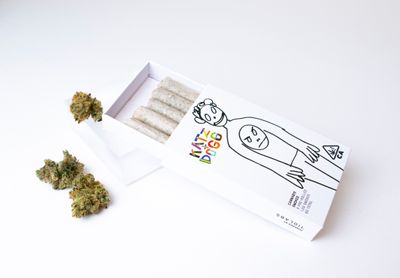 “You could smoke it first thing when you wake up and it wouldn’t be overwhelming,” 710 Labs partner Ian Skelly told the Times.

As one of the premier producers of flower and high quality extracts operating in both California and Colorado, 710 Labs partnership with Prince comes as little surprise. In addition to the newly-launched high art brand, the company’s founder Brad Melshenker has previously collaborated with gallery owner Nicholas Fahey on “This Is A Pipe,” an art book tracking the history and evolution of functional glass. Melshenker has also collaborated with artist Daniel Cohen on his “This Is Addictive” series.

“The best thing about the cannabis plant is how it brings people together,” Melshenker said. “The fact that it brought us to working with such an iconic artist as Richard Prince is a blessing.”

Katz + Dogg debuted last week at Gagosian San Francisco, where Prince’s new work was also on view. The cannabis brand is available now in select dispensaries across the Golden State.

NEWS
CALIFORNIA
CELEBRITIES
CELEBRITIES AND WEED
MORE...
Zach Harris
FOLLOW
Zach Harris is a writer based in Philadelphia whose work has appeared on Noisey, First We Feast, and Jenkem Magazine. You can find him on Twitter @10000youtubes complaining about NBA referees.
Share this article with your friends!
AD
By using our site you agree to our use of cookies to deliver a better experience.
Accept
Decline
MORE FROM MERRY JANE