Green Day bassist Mike Dirnt is giving new meaning to the pop punk band’s 2004 hit “Wake Me Up When September Ends” — after all, when you’re a cannabis entrepreneur, it’s best to be fully functioning when harvest season starts every October.

Following in the footsteps of everyone from Willie Nelson and Jenny Lewis, to Snoop Dogg and Cypress Hill, Dirnt is one of the latest musicians to dip his feet — and bank account — into California’s legal weed market. Even with a new Green Day record recently hitting the airwaves and a now-delayed tour in his planner, Dirnt is taking on a new role as investor, brand ambassador, and marketing specialist at Santa Cruz-based cannabis and hemp cultivator Goldenseed.

Why did @mikedirnt invest in Goldenseed? Hear it from the man himself here.

According to a deep dive from Variety, Dirnt got involved in the ganja game after watching his wife successfully overcome breast cancer, with weed helping quell the side effects of chemotherapy. “The difference after she started taking these pot pills was like night and day,” he told Variety. “There was light at the end of the tunnel.” And with a focus on environmental sustainability and eyes on global expansion, Dirnt said that Goldenseed was the perfect place to plant his roots in the industry.

“There’s just limitless potential,” Dirnt said. “Of course, the teenager in me would be, like, ‘Fuck, yeah.’ But our goal is to get cannabis to the point where it’s not taboo. The plant is like bamboo in Asia; it has so many different uses.”

Goldenseed already operates a 100-acre farm on the outskirts of Santa Cruz that can handle 5 million plants at a time. The company’s full-strength bud is sold in 85 dispensaries across the Golden State, with an even bigger footprint for the brand’s hemp CBD products. Goldenseed is also the first American cannabis business to receive approval by the Federal Trade Commission to offer shares to the public, though it cannot be listed on the New York Stock Exchange yet.

“It all starts with the dirt,” Dirnt told Variety. “You want to grow in scale, but in a more responsible way. We’ve built this on a solid model… We’re using sun and water, using regionally-sourced compost, the location is beautiful. What you put into the plant is passed on. You need to treat it right from the ground up.” 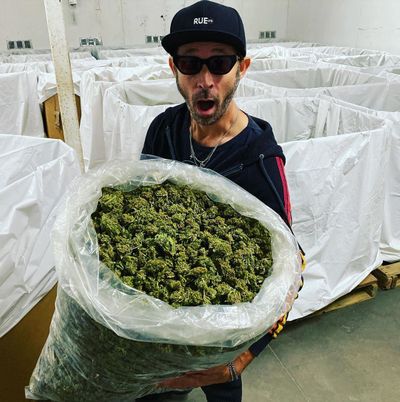 As for Dirnt’s personal favorite, the bassist said that he is fond of the company’s Sunset Sherbet pre-rolls — twisted up with added terpene chips.

“I’m in Green Day, so I definitely have a strong history with pot,” Dirnt joked.

NEWS
CALIFORNIA
CELEBRITIES
INDUSTRY
MORE...
IN THIS STORY
CBD
Click to shop at our CBD store
Zach Harris
FOLLOW
Zach Harris is a writer based in Philadelphia whose work has appeared on Noisey, First We Feast, and Jenkem Magazine. You can find him on Twitter @10000youtubes complaining about NBA referees.
Share this article with your friends!
AD
By using our site you agree to our use of cookies to deliver a better experience.
Accept
Decline
MORE FROM MERRY JANE