NEWS
"Organism Engineering" Company Signs $122 Million Deal to Create Lab-Grown Ganja
AD
The deal between Ginkgo Bioworks and Cronos will fund experiments involving the production of pure cannabinoid extracts in a lab without the need to grow actual pot plants.
Published on September 6, 2018

As the body of research on cannabis grows, scientists have been increasingly focusing their sights on isolating and studying the individual cannabinoids naturally present in the plant. Researchers have begun to more fully understand some of the better-known cannabinoids, like CBD and THC, but the plant also contains a number of other compounds which are difficult to extract and study due to their low concentrations.

That may soon change thanks to a new partnership between an American organism engineering company and a Canadian cannabis producer, who intend to produce these individual cannabinoids in a lab environment, without needing to grow a single plant.

Ginkgo Bioworks, a Boston-based company that has also partnered with major pharmaceutical firms like Bayer AG and Cargill Inc., started off creating scents for the fragrance industry. The company can identify the DNA code responsible for the scent of a rose, for example, and then transfer that code to brewer's yeast. “Now when you brew it up in that same brewery, instead of beer coming out, rose oil will come out,” Ginkgo CEO Jason Kelly said to Bloomberg. “It’s cheaper, it’s not subject to weather conditions, the price isn’t all over the place, it’s not different if you grow it in Morocco or somewhere else, it’s just a much better product.”

Kelly had the bright idea to utilize this technology to isolate individual cannabinoids from the cannabis plant and create them in a lab. But rather than struggling with the difficulties of operating a canna-business in the U.S., Kelly decided to look to Canada, where cannabis will be fully legal nationwide in just over a month. This week, Ginkgo announced a $122 million deal with Toronto-based cannabis producer Cronos, which itself made history this year by becoming the first cannabis company to go public on the U.S. stock market. 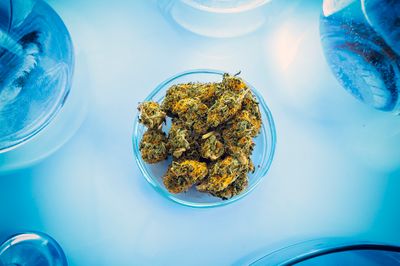 In addition to producing some of the better-known cannabinoids like CBD and THC, which are widely being used to treat a number of medical conditions, Ginkgo aims to use its technology to explore lesser-known compounds. "Beyond THC and CBD, there's a whole class of rare cannabinoids in [the plant], but accessing them at a remotely reasonable cost hasn't been feasible," Kelly said to Business Insider.

THCV, for example, has recently caught the medical industry's interest for its potential to reduce appetite, but it only appears in very low concentrations within the natural cannabis plant. As a result, it’s difficult and expensive to extract enough of the compound using traditional cultivation methods to make it a viable medical product. Ginkgo's technology will be able to avoid these restrictions, allowing pure THCV or other cannabinoids to be produced in a lab environment. “Being able to consistently and efficiently produce high-purity cannabinoids, that’s the holy grail,” Cronos CEO Mike Gorenstein said to Bloomberg.

In addition to saving time and money, lab-created cannabinoids have another potential benefit. Because they are not directly produced from the cannabis plant itself, these products may have a greater chance of being approved by the U.S. government. In 1985, when the prospect of large-scale cannabis reform still seemed like a pipe dream, the FDA approved Marinol, a synthetically-produced form of THC, to treat nausea for AIDS and cancer patients.

This year, the agency went so far as to approve Epidiolex, an epilepsy treatment based on CBD harvested from actual cannabis plants. While the DEA still classifies all other CBD treatments as Schedule I drugs, the FDA approval will force them to reschedule Epidiolex to a less-restricted classification. Ginkgo’s new lab-derived cannabinoids could also potentially be classified as less-restricted drugs, as well as patented pharmaceuticals, which likely explains why Cronos was eager to ink the nine-figure deal.

NEWS
BUSINESS
TECHNOLOGY
RESEARCH
MORE...
IN THIS STORY
CBD
Click to shop at our CBD store
Chris Moore
FOLLOW
Chris Moore is a New York-based writer who has written for Mass Appeal while also mixing records and producing electronic music.
Share this article with your friends!
AD
By using our site you agree to our use of cookies to deliver a better experience.
Accept
Decline
MORE FROM MERRY JANE