As America continues to tackle the nation’s worst drug abuse epidemic in our short history, the federal justice system has finally started to go after the country’s deadliest drug dealers — Big Pharma CEOs. On Wednesday, the latest corporate pusher appeared in federal court to face responsibility for his role in expanding the opioid epidemic.

Michael Babich, the former CEO of Insys Therapeutics, an Arizona-based producer of a fentanyl mouth spray called Subsys, pled guilty to conspiracy and mail fraud in a Massachusetts courtroom yesterday. Babich admitted to participating in a kickback scheme where doctors were paid to increase prescriptions of the deadly opioid.

According to Reuters, Babich faces up to 25 years in federal prison, but could get off with a more lenient sentence if he decides to testify in the upcoming trial of Insys founder and onetime chairman, John Kapoor, who also stands accused of facilitating bribes to spike Subsys sales. Kapoor will face trial later this month.

In 2017 alone, opioids were responsible for more than 47,000 overdose deaths, with the Center for Disease Control crediting more than half of those lost lives to synthetic opioids like fentanyl, a drug that is 100 times stronger than morphine and 50 times more potent than heroin. 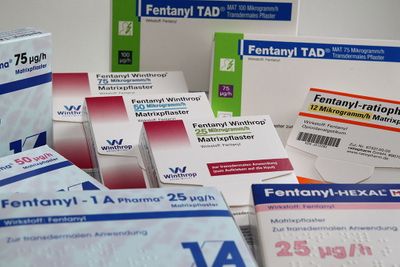 As part of a settlement with the U.S. Justice Department, announced in August, Insys said that it had agreed to pay at least $150 million in damages, but that hasn’t shielded the pharmaceutical company’s past employees from facing their own days in court. In addition to Babich’s plea this week, Alec Burlakoff, Insys’ former vice president of sales, pleaded guilty earlier this fall to participating in the conspiracy, and Babich’s wife, a former Insys sales representative, admitted to her own role in the scandal in 2017.

Meanwhile, Americans across the country are still struggling with the daily horrors of opioid addiction. And despite recent prescription restrictions and charges brought against Big Pharma suits like Babich, a categorical disregard for evidence-based addiction counseling and support has complicated and intensified the years-long epidemic.

Insys founder John Kapoor will face trial for his role in the pharmaceutical kickback scheme on January 28th.

NEWS
CRIME
DRUGS
ADDICTION
MORE...
Zach Harris
FOLLOW
Zach Harris is a writer based in Philadelphia whose work has appeared on Noisey, First We Feast, and Jenkem Magazine. You can find him on Twitter @10000youtubes complaining about NBA referees.
Share this article with your friends!
AD
By using our site you agree to our use of cookies to deliver a better experience.
Accept
Decline
MORE FROM MERRY JANE