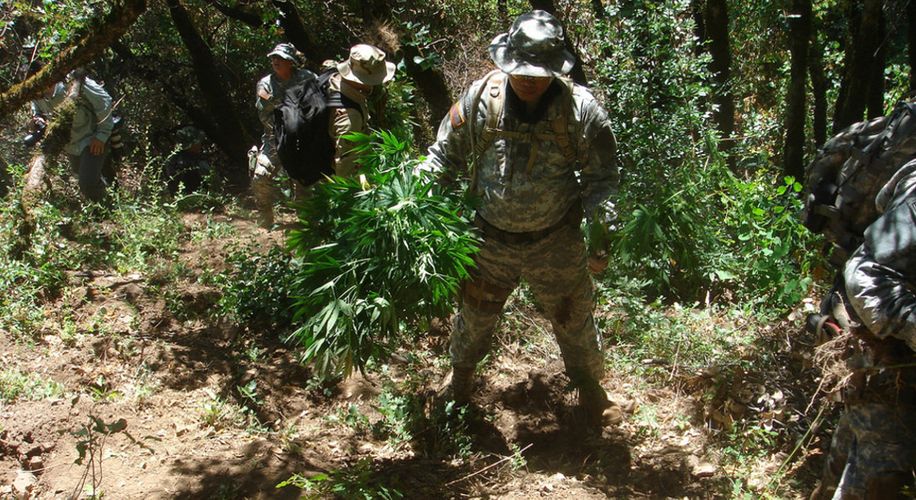 Pesticides from black market cannabis grows are poisoning public lands, but federal agents are failing to properly rehabilitate these sites after busting them.

Pesticides from black market cannabis grows are poisoning public lands, but federal agents are failing to properly rehabilitate these sites after busting them.

A new report by the U.S. Department of Agriculture (USDA) has found that federal agents tasked with busting illegal cannabis grows have been failing to properly clean up these sites, as reported by Marijuana Moment. The U.S. Forest Service says they have removed over 2.6 million cannabis plants from federal lands from 2014 to 2016. In California alone, it’s been estimated that out of the 13.5 million tons of weed the state produces every year, 11 million tons ends up on the black market.

Illegal cannabis grows not only pose a threat to the legal cannabis industry, but also to the environmental health of local plants and wildlife. Last year, the Forest Service (FS) reported that thousands of acres of federal forests in California have been polluted by waste from illegal pot farms. Unhampered by regulations, illegal cannabis farmers often use federally-banned pesticides among other chemicals to protect their crops. The leftover refuse from these grows has been poisoning wildlife including mountain lions and fish, with runoff from the farms seeping into local waterways.

Cleaning up the mess left behind by these illegal growers falls to the Forest Service, but authorities have apparently had more success busting these pot farms than mitigating the environmental damage done by the farmers. The USDA Inspector General's report states that the Forest Service “does not always reclaim and rehabilitate marijuana grow sites after plants are eradicated, and FS is unaware of the overall impact these marijuana grow sites pose to the forest ecosystems,” Marijuana Moment reports.

The USDA report says that these lapses are the result of “a lack of FS resources and expertise, as well as communication and coordination between FS’ Law Enforcement and Investigations (LEI) and [National Forest System] staff. As a result, trash and chemicals such as pesticides and fertilizers are still present on these grow sites, thereby putting the public, wildlife, and environment at risk of contamination.”

The report also notes that Forest Service officials are not keeping track of grow sites after their raids, and are failing to detail exactly what kinds of hazardous chemicals are discovered at each site. “Without these data, FS is unable to determine the presence, types, and locations of hazardous materials left on the national forests,” the report notes. “Consequently, it cannot prioritize grow sites for reclamation and rehabilitation efforts to minimize the sites’ risk to the public and wildlife.”

USDA’s analysis verifies that California is still the main offender when it comes to black market grows on federal lands. “Over 90 percent of marijuana plants seized on NFS land in [fiscal years] 2014 and 2015 were located in California,” the report said.

In response to the report, Forest Service officials said that they will create standardized systems to improve the documentation of site raids and to better track clean-up of illicit cannabis grows.