NEWS
Expert Beekeeper Says Hemp Plants Can’t Save Bees, But Pot Farmers Can Still Help
AD
British Columbia's head beekeeper said a recent study suggesting that cannabis plants can save the bees is not entirely accurate — but there is another way that weed farmers can help the insects.
Published on February 6, 2020

A new research study on cannabis and bees raised a glimmer of hope that the recent legalization of hemp could help stop bee populations from declining, but one of Canada's top beekeepers believes that these hopes are overstated.

The study, recently published in the Environmental Entomology journal, reported that bees are strongly attracted to hemp crops. The researchers found that larger plantations of hemp attracted more bees than smaller ones, and taller hemp plants attracted as many as 17 times more bees than smaller ones. The study authors concluded that hemp could help enhance pollinator populations by providing a late-season food source for bees.

Paul van Westendorp, British Columbia's chief beekeeper, has thrown shade on this sunny conclusion, however. Van Westendorp explained that although it is true that bees are attracted to cannabis pollen, they are unable to obtain enough nutrition from it. Bees generally prefer to consume the nectar and pollen produced by blueberries, watermelons, almonds, and other flowering plants, and by doing so, help these plants reproduce.

But only certain kinds of plants need help from insect pollinators. Other kinds of plants, like cannabis, rely on the wind to scatter their pollen. “As a general rule, wind-pollinated plants provide pollen that has relatively low nutritional value,” said van Westendorp to Mugglehead. “If you are a plant and you put your resources into pollen production — and wind is a very imprecise form of distributing this — much of that pollen is lost. It ends up on the surface of a lake, or on the wrong plant, or on the rooftop of a car.”

So, while it's true that bees can eat pollen from cannabis, this pollen provides relatively little nutritional value. Honey bees are smart about the kinds of pollen they collect, and will always choose a more nutritional food source over a lesser one. In the original study, van Westendorp believes that the bees were attracted to the hemp plants simply because there was no better food source in the area.

Bee populations have been dying out for the past 15 years, due to a combination of pesticides, habitat eradication, and soil erosion. Each year, greater numbers of bees die, and last winter, nearly 40 percent of all managed honey bee colonies declined. This tragedy is almost as bad for humans as it is for bees — honey bees alone are responsible for pollinating at least $20 billion worth of flowers, fruits, and vegetables in the US annually.

Although van Westendorp dashed the idea that simply planting hemp can save the bees, he did explain one way that cannabis farmers could help these essential pollinators. Most modern farmers use monoculture farming practices, where every inch of available land is used to grow one kind of plant in order to maximize profit. But by using intercropping, where two or three different crops are grown in close proximity, farmers can provide bee-friendly plants alongside other crops. 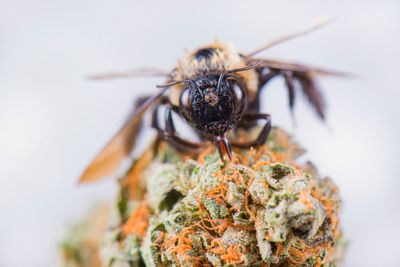 “All that you have to do is plant a row, or set aside a space for some bee foraging plants that can sustain these nests in the neighborhood over the summer season,” van Westendorp told Mugglehead. “Not just one, but a variety for bees to visit and get their nutrition.” These flowers can bloom over the summer, and will not compete with hemp plants, which are generally harvested late in the fall. By doing this, cannabis farmers can give bees who are naturally attracted to hemp plants a more nutritious food source.

Although cannabis pollen might not be the best possible food for bees, a French beekeeper has found a creative way to take advantage of their interest in cannabis pollen. The beekeeper, who calls himself Nicolas Trainerbees, has trained his honey bees to produce cannabis-infused honey by collecting resin from female marijuana flowers.

NEWS
AGRICULTURE
FARMING
CULTIVATON
MORE...
Chris Moore
FOLLOW
Chris Moore is a New York-based writer who has written for Mass Appeal while also mixing records and producing electronic music.
Share this article with your friends!
AD
By using our site you agree to our use of cookies to deliver a better experience.
Accept
Decline
MORE FROM MERRY JANE