NEWS
Dumpster Divers Digging for Dispensary Weed Are Wasting Their Time
AD
Hitting up pot shop garbage for free, easy cannabis is a clever idea, but lawmakers already got ahead on that one.
Published on February 27, 2020

Medical cannabis dispensaries and recreational retail pot shops have been targets for robberies since the first ones opened in the US. But now thieves are breaking into dispensary dumpsters in search of easy weed, and they’re turning up empty-handed.

On Wednesday, several dispensary owners in Tulsa, Oklahoma reported that dumpster divers were trying to crack into their locked up garbage bins. According to Oklahoma’s News 4, one dispensary left food near the pot shop’s dumpsters, under the impression that the divers were hungry rather than trying to get hungry via the munchies. Another dispensary started securing its dumpster with locks and chains.

Locking up the trash won’t exactly stop dumpster divers from scoring discarded marijuana, since Oklahoma law bans cannabis companies from simply tossing weed products in the garbage to begin with. Last year, lawmakers passed a law that requires all cultivators, dispensaries, and academic researchers to destroy any leftover weed onsite, either through incineration (nice), open burning (even nicer), burying, mulching, or otherwise turning the pot products into unusable, unsmokable compost.

Oklahoma’s weed waste regulations aren’t unique to the Sooner State, either. Reddit has been buzzing about dumpster diving for dank for the past few years in states like California and Washington, with most trash-traipsing redditors noting that looking for free weed out in the open isn’t just an invitation to get arrested; it puts the industry’s image at risk, too. Those few redditors who claimed they’ve found weed in garbage bins only ever scored weak-ass trimmings — and, to be fair, who would falsely boast about finding trim? 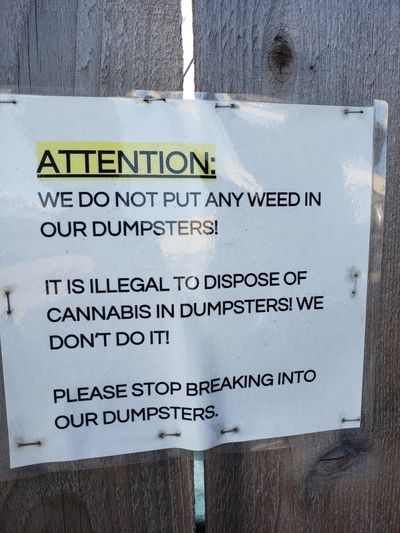 A warning sign posted behind a cannabis dispensary in Washington State. Image via

While destroying perfectly good weed is always tragic, there's a bright side to these regulations. To prevent cannabis scraps from being diverted to the black market, a new industry has thrived over the last few years. Private waste management companies and composting agencies now offer cannabis product elimination services since most state-operated waste companies won’t touch the federally outlawed plant or its extracts.

So, even though all of these laws around legal weed may create headaches for business owners and customers alike, at least there are some entrepreneurs out there making some extra green off of, well, the licensed operators’ extra green.

NEWS
DISPENSARIES
CRIME
WTF
MORE...
Randy Robinson
FOLLOW
Based in Denver, Randy studied cannabinoid science while getting a degree in molecular biology at the University of Colorado. When not writing about cannabis, science, politics, or LGBT issues, they can be found exploring nature somewhere in the Rocky Mountains. Catch Randy on Twitter and Instagram @randieseljay
Share this article with your friends!
AD
By using our site you agree to our use of cookies to deliver a better experience.
Accept
Decline
MORE FROM MERRY JANE