NEWS
Dennis Hopper’s Family Gets Set to Debut “Hopper Reserve” Cannabis Brand
AD
The “Easy Rider” legend will be memorialized in a new cannabis brand, which is expected to formally launch in early 2020.
Published on September 20, 2019

For most celebrity cannabis companies, the marketing plan is as simple as throwing a famous face on a glass jar or naming a new strain after a hit song. But for California’s newest celebrity bud brand, the weed, packaging, art, and concept is a tribute to one of American cinema’s most legendary countercultural figures: Dennis Hopper.

The beta product first appeared at the Alternative Herbal Health Services (AHHS) dispensary in West Hollywood, featuring a package that contains a gram of flower in a special edition tin, two packs of rolling papers, matches, and a collectible card featuring various photos that Hopper took himself, including one of Andy Warhol.

“Before he passed away, Dennis told his daughter that when cannabis became legal, he wanted his own strain,” AHHS owner Dr. Dina told Variety. “And the packaging reflects how he would’ve smoked it, rolling his own and lighting it with a match.” 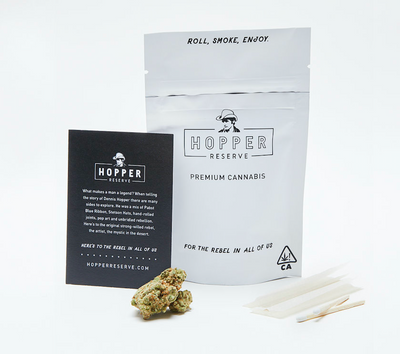 But while those special edition tins labeled as just Sativa, Indica, and Hybrid flew off of the shelves, MERRY JANE was told that the look and feel of Hopper Reserve could change significantly before it hits widespread distribution. In a post from the brand’s Instagram page, the company says that Hopper Reserve will offer “an unadulterated experience that brings cannabis back to its simple pleasures — just as Dennis Hopper would have wanted it.⁣”

When Hopper Reserve formally launches next year, it will join the likes of several other celebrity canna-brands owned or operated by musicians like Jenny Lewis and Mickey Hart, artist Richard Prince, and fellow actor Whoopi Goldberg.

CALIFORNIA
CELEBRITIES
PRODUCT
MOVIES
MORE...
Zach Harris
FOLLOW
Zach Harris is a writer based in Philadelphia whose work has appeared on Noisey, First We Feast, and Jenkem Magazine. You can find him on Twitter @10000youtubes complaining about NBA referees.
Share this article with your friends!
AD
By using our site you agree to our use of cookies to deliver a better experience.
Accept
Decline
MORE FROM MERRY JANE