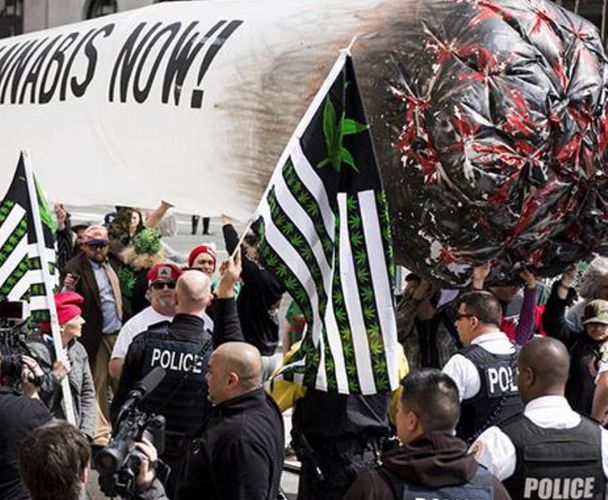 If hundreds of marijuana activists spark up during President-elect Donald Trump’s inaugural address (which is their plan), it is unlikely that they will be arrested, according to a report from the Associated Press.

At a recent new conference, District of Columbia Mayor Muriel Bowser told reporters that law enforcement would not give much attention to those peaceful protestors who decide to fire up joints during the upcoming presidential inauguration. Bowser said it “wouldn’t be our first priority” to arrest people for smoking weed.

It was revealed earlier last week that the D.C. Cannabis Coalition (DCMJ), the group responsible for legalizing marijuana in the nation’s capital, is planning to march from DuPont Circle to the National Mall, where Trump is to be sworn in on January 20. They will then be distributing exactly 4,200 joints to those in attendance to see the reality star become the next President of the United States.

According to its organizers, the primary objective of the protest is to tell national leaders “it’s time to legalize cannabis at the federal level.”

Although it sounds unlikely that District police will swoop in and take action against protesters who light up four minutes and twenty seconds into Trump’s first address as Commander-in-chief, there is still a possibility that federal agents could.

While marijuana possession (up to two ounces) is completely legal in the District, it remains against the law to have it on federal property. It is for this reason that organizers in the DCMJ want participants to know that there is still a possibility that they could be dragged to jail – even if city officials take hands-off approach to the situation.

Incidentally, the DCMJ is the same group who staged a highly publicized “smoke-in” last year outside the White House. No arrests were reported.