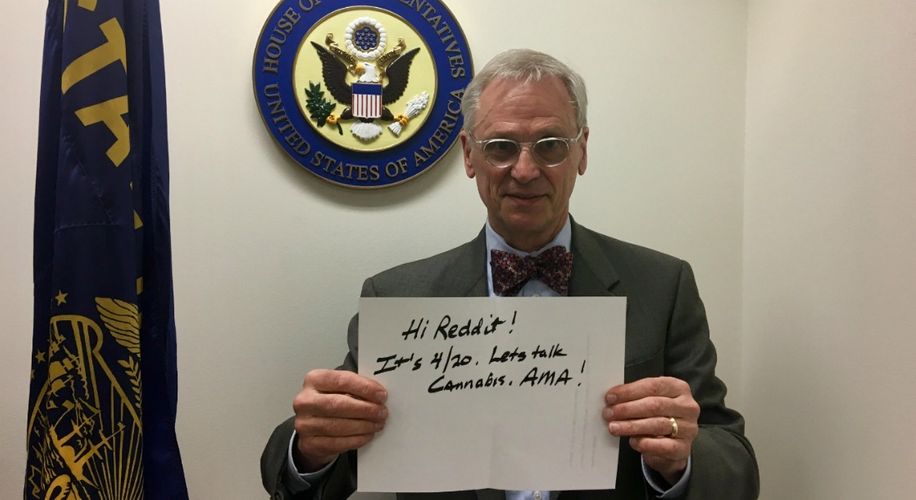 If you’re into talking about weed online - and let’s face it, you are - you’ve most likely clicked your way over to Reddit’s cannabis subsection /r/trees to check out home-grows from around the world or chat with like-minded stoners. You definitely aren’t alone, and as part of yesterday’s 4/20 celebration, we teamed up with /r/trees and Congressional Cannabis Caucus member and just flat out chill Oregon legislator Earl Blumenauer for a special holiday edition of “Ask Me Anything.”

Members of Congress are now doing AMAs on the subreddit devoted to marijuana use, truly America is already great. https://t.co/s0Ua6Vq3CL

Blumenauer jumped on /r/trees yesterday and fielded questions from the community, touching on topics from federal legalization and workplace drug testing, to whether or not he’s ever smoked weed himself (he said he hasn't). According to /r/trees moderator Michael Griffin, Blumenauer is the first politician to take the dive and participate in a cannabis-themed AMA.

Not one to miss out on any 4/20 fun, Snoop got online in time to ask Blumenauer what celebrities can do to help further the cause of cannabis legalization. The Congressman thanked the Doggfather for his continued work, told him to keep on normalizing marijuana in mainstream culture, and even invited him to sit in on a Congressional Cannabis Caucus meeting.

After a few hours of chopping it up with Reddit’s cannabis community, Blumenauer got offline and headed to a local Portland dispensary “to check in and see how they are doing!" So while Blumenauer says he’s never consumed weed personally, he’s more than demonstrated in Congress, online, and in stores that he’s not afraid to stand up for cannabis and associate himself with the everyday cannabis user.

To check out the rest of Blumenauer's answers, head over to /r/trees.