NEWS
Colorado’s New Governor Gave Out Hemp Papers at His Inauguration
AD
Gov. Jared Polis, the state’s new head honcho, is ready to pick up where his predecessor left off when it comes to cannabis. At his inauguration, the event program was even printed on hemp paper.
Published on January 9, 2019

When Colorado residents voted to legalize adult-use cannabis in 2012, the Centennial State blazed a path that is still burning red hot seven years later. On Tuesday, America’s first bastion of legalization re-upped its dedication to all things green by inaugurating a newly-elected pro-pot Governor, Jared Polis. And Polis returned the marijuana advocacy message with the help of some weed-friendly literature.

According to a tweet from Fox Denver reporter Joe St. George and follow-up reporting from Marijuana Moment, as Governor Polis took over the Centennial State reigns, inauguration spectators were given event programs printed entirely on hemp paper.

Following the signing of the federal Farm Bill last month, forces inside and outside of the cannabis industry have renewed their focus on hemp and its myriad uses in medicine, textiles, stationary, and much, much more.

Throughout his successful gubernatorial campaign, Polis voiced support for a variety of cannabis-focused initiatives, including expungement of non-violent cannabis-related criminal records, expansion of Colorado’s medical marijuana program, and refusing to cooperate with federal law enforcement attempts to enforce prohibition in state-legal weed industries.

As for the hemp paper used for the inauguration programs, we’re pretty sure they were stapled and not glued, but that won’t stop us from trying to use the all-natural handouts as politician-approved rolling papers. Thanks Gov! 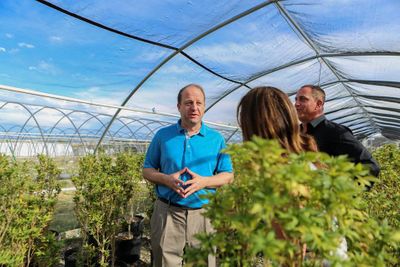 HEMP
NEWS
POLITICS
LEGALIZATION
MORE...
Zach Harris
FOLLOW
Zach Harris is a writer based in Philadelphia whose work has appeared on Noisey, First We Feast, and Jenkem Magazine. You can find him on Twitter @10000youtubes complaining about NBA referees.
Share this article with your friends!
AD
By using our site you agree to our use of cookies to deliver a better experience.
Accept
Decline
MORE FROM MERRY JANE