Legendary comedic duo Cheech and Chong will deliver unto the earth’s stoners a new comic book to be released on 4/20 of 2022, High Times reports. Cheech and Chong’s Chronicles! A Brief History Of Weed takes a page from the pair’s breakout film Up in Smoke, and blends in episodes from world marijuana history.

“We, the most iconic stoners, embark on a road trip that morphs into a journey of the ‘real' history of cannabis,” tweeted Tommy Chong upon announcing the release.

Our first ever graphic novel is here! We’ve teamed up with @Z2Comics to take you on a comics journey. We, the most iconic stoners, embark on a road trip that morphs into a journey of the “real” history of cannabis. Snag the book and entire bundle: https://t.co/wOtl9RwNdf pic.twitter.com/erzqM1iR6E

If the plot of such a tome of cannabic wisdom concerns you: The book follows Cheech and Chong’s Up in Smoke characters Pedro de Pacas and Anthony “Man” Stoner on a road trip to Reno, where a casino manager friend is in desperate need of an opener for a rock concert. Along the way, the reader is treated to an account of the history of marijuana — one that, judging a book by its cover, involves cannabis-consuming historical figures like Frida Kahlo, Muhammed Ali, and... a Roman gladiator, astronauts, and a dinosaur? 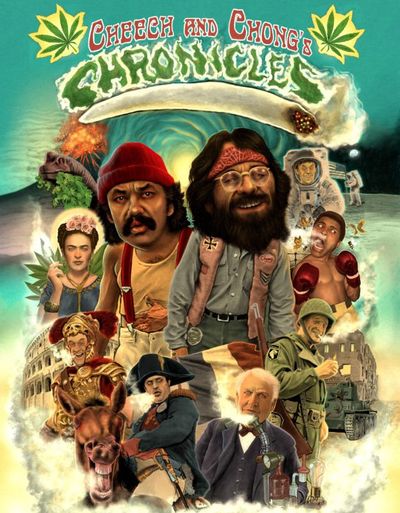 The comic will be published by Z2 Comics, an imprint best-known for creating comics both about and in collaboration with musical artists like Cypress Hill and Sublime.

Cheech and Chong have been pop culture staples more or less since their 1978 movie Up in Smoke shocked the world by becoming a smash box office hit. The film was based on the duo’s weed-wreathed stand-up routines that they honed at a Toronto strip club and, later, on grueling tours that would see them performing 300 nights a year. Up in Smoke, like the new comic book, revolves around a madcap road trip undertaken by its two stoned heroes.

Chong has since become a legalization activist — probably a natural move for someone whose home was raided by a SWAT team in 2003, when the comedian was sentenced to nearly a decade in prison on charges related to manufacturing and distributing glass pipes on the internet. (He wound up serving around nine months.)

The duo have since put their iconic monikers on nearly everything associated with weed — rolling papers, nag champa incense, glassware, and even a dispensary chain.

“I’m so excited for everyone to see this amazing work from so many talented artists bringing to life the legend of Cheech and Chong,” Chong said of the new comic book. “I can’t wait to share this with all my fans.”

To get your sticky hands on a copy of the comic, click here.

420
COMIC
COMEDY
WEED HISTORY
MORE...
Caitlin Donohue
FOLLOW
Caitlin Donohue is a Bay Area-raised, Mexico City-based cannabis writer and author of She Represents: 44 Women Who Are Changing Politics and the World. Her weekly show Crónica on Radio Nopal explores Mexican marijuana culture and politics in the prohibition era. Follow Caitlin on IG @byrdwatch.
Share this article with your friends!
AD
By using our site you agree to our use of cookies to deliver a better experience.
Accept
Decline
MORE FROM MERRY JANE