NEWS
California’s Ban on CBD Oil and Food Isn't New, but It's Not Enforced Everywhere
AD
The California Department of Public Health claims it's only following national regulations regarding CBD as a food additive, but the rule could affect CBD oil, too.
Published on August 2, 2018

If it seems you can't go anywhere in California without stumbling upon a store offering CBD oils, coffee, cocktails, food products, and more, that may be soon to change. No, the state hasn't come out with a new CBD law; however only recently has the California Department of Public Health (CDPH) set out to selectively enforce an already existing policy that technically bans hemp-derived CBD from food products, as well as ingestible CBD oil from being sold outside of the state’s licensed cannabis retailers.

In essence, that means CBD oil is technically banned outside of California's dispensary system, but there's no real plan to enforce the policy aside from local efforts, which are contingent upon which concerns land on the radar of municipal health officials. Whether this policy is actually enforced widely could have a huge impact on thousands of companies: In 2017, hemp CBD sales garnered $190 million, according to New Frontier Data, while by 2022, they're expected to hit $646 million. Despite CBD's murky legal status as a Schedule I drug, companies have been shipping the compound all over the country, with a great deal of non-California brands supplying the Golden State. Under the republicized policy, CBD companies based in California may be hit the hardest, but the CDPH doesn't have any estimates on the number of companies that could be impacted.

According to regulations set by the U.S. Food and Drug Administration (FDA), CBD is prohibited as a food additive nationwide. "California adopts FDA regulations, so CBD and CBD oil, whether sourced from industrial hemp or from cannabis, cannot be added to foods or beverages," said a CDPH spokesperson to MERRY JANE. Only under MAUCRSA — California's adult-use and medical cannabis program — can CBD be included in edible products to be purchased at licensed cannabis retailers.

"CDPH is aware that there has been some confusion on the legal use of CBD and CBD oil since the legalization of medicinal and adult-use cannabis in California," CDPH’s spokesperson added, noting that these are not new regulations. In response to questions regarding the policy's enforcement, CDPH says that they only inspect wholesale food manufacturers, processors, and distributors, enforcing the law pursuant to the FDA's CBD guidelines, while “local retail food facilities are inspected by local environmental health agencies."

Many CBD companies supplying to food brands or making edible CBD supplements on their own are rightfully angry. "It's really sad — a lot of people who can't afford to get into the cannabis game are looking at CBD to enter into the medicinal and therapeutic market. They've invested their life savings, believing it's legal," says attorney Dana Cisneros with Cannabis Corporate Law Firm in Southern California. "The other thing that's really sad is that I see CBD as the bridge to normalize cannabis, to get people to understand that cannabis is not a bad thing."

Though CDPH merely confirmed the policy, Cisneros says they've "overstepped their bounds" by essentially creating a law. "That's for the legislature to do, and if they don't the voters will," says Cisneros. "It's a horrible policy decision [and] it's not pointing to California law. The thing is, industrial hemp in the state of California is actually legal." The state's definition of industrial hemp under Health and Safety Code 11018.05 includes extracts, derivatives, and compounds of any kind. Not to mention, the CBD molecule — whether derived from a hemp or marijuana plant (or another kind of crop) — is the same nonetheless.

"Nobody will enforce this, other than one-offs by the county departments of public health," she adds. "I doubt they will enforce it on any wide scale, so I have no idea what they think they're accomplishing by doing this." 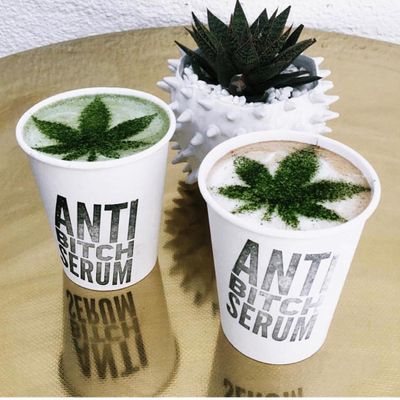 One of those one-offs, however, was Cisneros' client Jeni Castro, co-owner of Coffee Dose in Costa Mesa. Just three months ago, the mom-and-pop cafe began to offer two CBD drinks on the menu: the lavender-infused Mary Matcha and the almond milk latte Mary Jane, each with 10 milligrams of CBD.

"We grew so quickly overnight," says Castro, because of those CBD drinks, drawing customers from all over the Inland Empire and even San Diego. But that all came to a halt, following a formal complaint that resulted in Orange County’s health department impounding the cafe's CBD products. Coffee Dose lost 30 percent of its income.

"According to the California Health Department, everyone is in charge of enforcing [this policy], but when we asked, they actually said they don't have any resources or plan of action to enforce this equally," says Cisneros. Unless a health official receives a complaint, the state doesn’t have a plan to get businesses to comply. Much of the enforcement depends on whether individual county health departments are even aware of the CBD policy.

"The most frustrating thing is watching businesses come out with their summer CBD menu, and there's nothing we can do about it. This is so minimal, and it's so stupid we're being singled out," says Castro. "We're still fighting the state of California and the [Orange County] Health Department. We want them to change their mind."

Like Castro’s, many other businesses could soon experience the aftermath of the CDPH's policy reminder. The policy statement will affect investor interests, says Bryce Berryessa, CEO of cannabis edibles company La Vida Verde and board member of the California Cannabis Manufacturers Association, who cited one CBD kombucha brand whose investors pulled out overnight after hearing the news, nearly causing the company to crash.

Whether a company calls it CBD oil or hemp oil, at the end of the day, it's not allowed, he says. "The only CBD products in California have to be purchased through regulated cannabis dispensaries and retailers, and those businesses can only purchase CBD products from regulated cannabis manufactures and cultivators," Berryessa says. "If that's the case, then all that CBD is subject to the state excise tax at 15 percent to the consumer." Meanwhile, all the CBD consumables not within the regulated cannabis marketplace haven’t been subject to that tax or other regulations, he adds, noting that the biggest problem right now is that California doesn't have a stronger hemp CBD industry, as most CBD is sourced from other states.

Until then, it appears that CBD’s dubious status in California is another unforeseen consequence of the Golden State’s experiment with cannabis legalization.

CBD
BUSINESS
LEGALIZATION
HEALTH
MORE...
IN THIS STORY
CBD
Click to shop at our CBD store
Madison Margolin
FOLLOW
Madison is a New York/Los Angeles-based writer who specializes in cannabis coverage. Her work has been featured in Playboy, the LA Weekly, and other publications.
Share this article with your friends!
AD
By using our site you agree to our use of cookies to deliver a better experience.
Accept
Decline
MORE FROM MERRY JANE