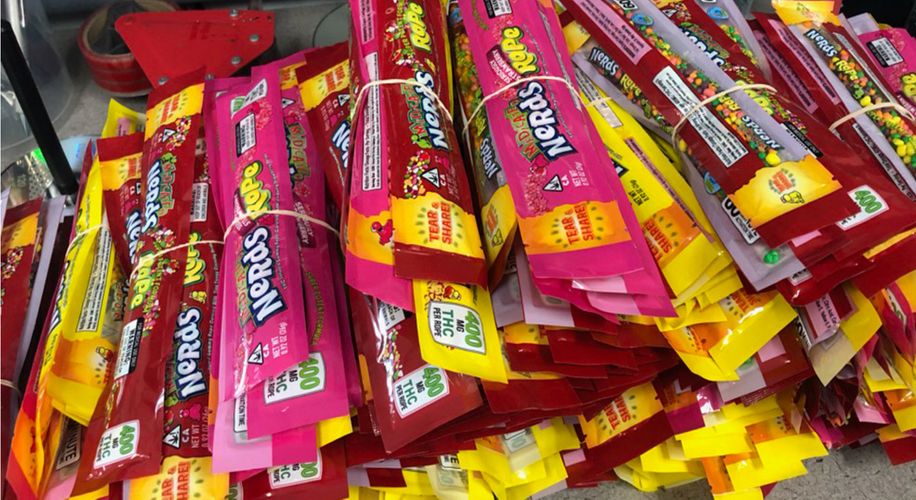 The popular candy is being mimicked by black market weed dealers looking to cash in on familiar brand names.

The popular candy is being mimicked by black market weed dealers looking to cash in on familiar brand names.

According to the Victor Valley News, police served a warrant at the SoCal home last week, and upon entering the property found boxes of fake Nerds Rope candies stacked to the ceiling like a 7-11 stockroom. Each package was labeled as a “THC Medicated Nerds Rope,” complete with a graphic advertising a whopping 400 miligrams of THC in each serving. During their search, police also found cannabis oil, as well as bulk quantities of gummy bears and loose Nerds candy.

“Through investigation, it was determined the occupants of the residence were mixing the candy with the cannabis oil to create a THC infused product,” a release from the Victorville police department detailed. “It is believed this product was being sold to marijuana dispensaries throughout California and Nevada.”

Earlier this year, police in West Virginia intercepted a 7.5 pound box of identical Nerds Rope edibles being shipped from California to Florida. It is not clear if the fake Wonka ropes originated from the same place, or if bootleg Nerds Ropes are simply the latest widespread trend in black market edibles. In June, US Attorney Mike Stuart issued a federal warning about the THC-infused candy, claiming dramatically that “Trick or Treat will never be the same again.”

In Victorville, the three adults present in the house at the time of the raid were arrested and charged with possessing cannabis for sale. Additionally, one of the three was charged with counts of child cruelty, because her two small children were living in the same house.