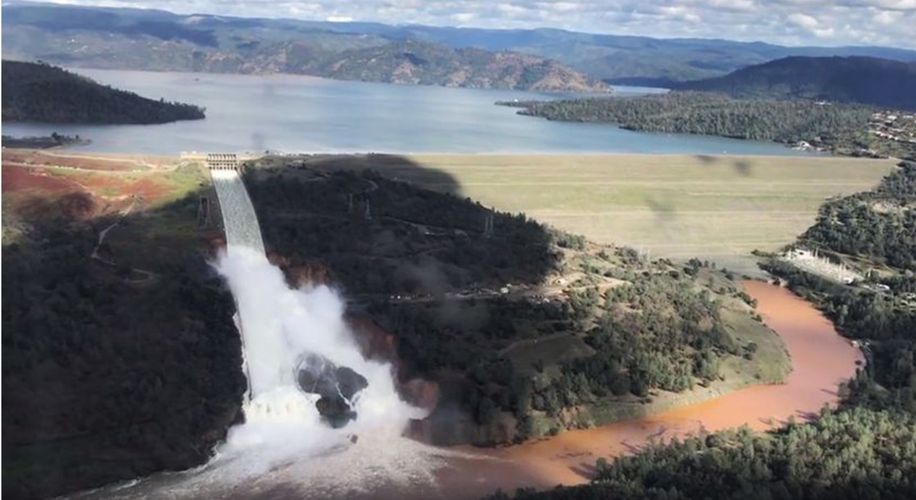 180,000 residents were ordered to evacuate the area as water started leaking over the Oroville Dam’s emergency spillway.

180,000 residents were ordered to evacuate the area as water started leaking over the Oroville Dam’s emergency spillway.

As Donald Trump attempts to funnel taxpayer money to his fund his border wall between Mexico and the US, crumbling infrastructure within the country is being left unchecked. This past weekend, around 180,000 Northern Californians were ordered to evacuate after the Oroville Dam’s main spillway started to collapse.

Although the Oroville Dam was not at risk of total failure, officials feared that the damaged spillway could cause massive amounts of flood water downstream. Located about 65 miles north of Sacramento, the potential disaster led to a widespread evacuation order and subsequent local panic. Gov. Jerry Brown issued an emergency order to set up shelters for residents fleeing their homes located downstream from the dam.

The flood risk came after a 200-foot hole suddenly opened up in the Oroville Dam’s main spillway, causing water to start pouring over the emergency spillway. As the spillway struggled to maintain the giant body of water, officials feared that major spillage into Feather River could cause communities to flood and more levees to fail.

While the flooding started to subside late on Sunday, the state has kept their evacuation order in effect. State engineers had been fighting to keep the spillway intact throughout the week, and thought they had the situation under control on Friday. But the following day, water levels rose so high that the emergency spillway was used for the first time in the dam’s 48-year history.

Though the dam was experiencing trouble prior to the weekend, state officials didn’t treat the situation like an emergency until Sunday afternoon. Butte Country Sheriff Kory Honea ordered residents to evacuate the area, stressing that the situation was “NOT a drill”.

The Oroville Dam is 770-feet tall, making it the tallest in the country.  State engineers have yet to determine the source of the damage, but claim that the dam itself is not impaired, just the spillway. While restless residents are unsure of when they can return to their homes, the state is clearly taking the “better safe than sorry” route.

The potential catastrophe seems to have been narrowly avoided, but the emergency evacuation hints at an ongoing problem with crumbling infrastructure throughout the country. While President Trump ran his campaign on the promise of investing in infrastructure, the crisis in Northern California shows a glaring flaw in Trump’s plan.

With his goal of privatizing infrastructure development through the use of tax credits, private developers are unlikely to invest in projects like dams, water pipes, and bridges.

The state of California might have caught a lucky break this time around, but their close call represents an underlying problem with the country’s aging infrastructure and our lack of investment in projects that actually protects lives.