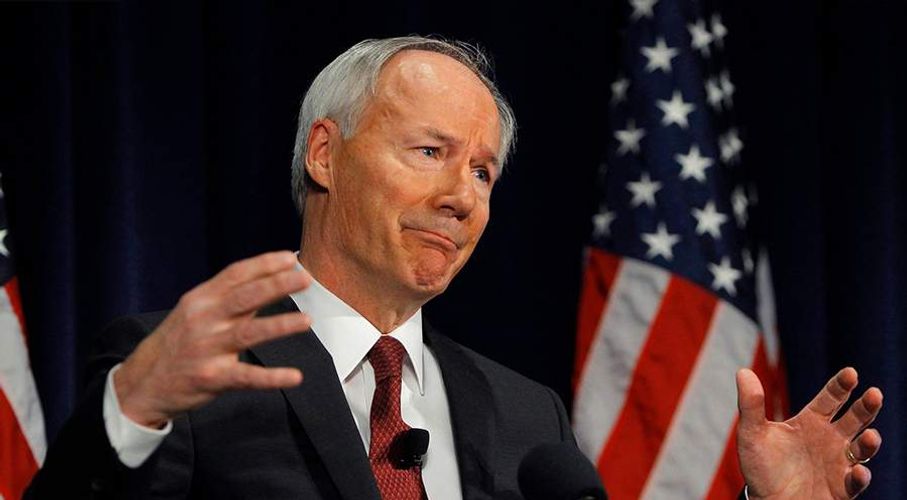 Governor Asa Hutchinson must still be brainwashed from his days with the DEA.

Governor Asa Hutchinson must still be brainwashed from his days with the DEA.

Arkansas Governor Asa Hutchinson, apparently still brainwashed from his days with the Drug Enforcement Administration, has been out in the public spewing hard core devotions of reefer madness in an attempt to persuade the voters to completely disregard two medical marijuana initiatives when they head to the polls later this fall.

Standing alongside a panel of supposed medical professionals earlier this week at the State Capitol, Governor Hutchinson told reporters that he was not in favor of the medical marijuana ballot measures that are set to go before the voting public in November because none one of them comes with the same federal safeguards that leads to effective medicine.

“We all want those who are ill or suffering to have the right kind of medicine, but there is a reason we have an [Food and Drug Administration] approval process for new medicines,” Hutchinson said in a statement. “We don’t vote on cancer cures, and we should not set a new pattern for determining what is good medicine at the ballot box.”

Mimicking some of the recent comments from his Attorney General Greg Bledsoe, Hutchinson said he does not believe it is necessary to establish a statewide medical marijuana program when the federal government has already provided seriously ill patients with a pharmaceutical version of the herb called Marinol.

However, supporters from Arkansans for Compassionate Care, one of the groups hoping to legalize medical marijuana this year, argue that Marinol has never been widely respected by most patients because it is an expensive synthetic drug.

Much of the reason marijuana is credited for being an effective treatment is largely due to the entourage effect – a process of many different compounds working in unison to provide the desired result. However, Marinol consists of only the psychoactive ingredient known as THC.

Nevertheless, Hutchinson believes voters should simply wait for the federal government to reschedule cannabis rather than support the initiatives that will go before them in the upcoming election.

“This could take years,” he continued. “Sick and dying Arkansans have waited long enough. These patients and their families need relief now—just like similar patients have in 25 others states and the District of Columbia. Luckily, voters will have the choice to vote for Issue 7 this November.”

The Arkansas Medical Marijuana Amendment (AMMA), which is fronted by Little Rock attorney David Couch, and the Arkansas Medical Cannabis Act (AMCA), a movement supported by Arkansans for Compassionate Care, will face off in the polls later this fall. As long as the issue of two competing proposals does not confuse the voters and sabotage them both, there is a distinct possibility that Arkansas will pass a medical marijuana law in the coming months.

A 2015 poll from the University of Arkansas found 68 percent of the residents would support the legalization of cannabis for medicinal use.  Arkansas is one of nine states to vote on marijuana this November.

Click here for a state-by-state breakdown on marijuana ballot initiatives.