We can all agree that kids shouldn’t be consuming cannabis unless a doctor signed off on it, right? Over the weekend, an eight-year-old in Canada scored a bunch of weed products after winning a raffle at a youth hockey tournament, and his grandad is about to drop his mitts over it — and rightly so.

The raffle took place during the novice hockey tournament at BC’s Dawson Creek Minor Hockey. The game pits seven- and eight-year-old athletes against one another, and traditionally the raffle included kid-appropriate prizes such as non-infused snacks, movie tickets, or family-friendly card and board games, CTV News reported.

But according to Keith Redl, a former cop, his grandson instead received a goodie bag filled with weed products after winning the raffle this year. The bag allegedly contained marijuana-infused chocolates, infused chai tea, and other cannabis products that all featured the big red Canadian THC warning stamp.

“My grandson thought he won a great prize,” Redl told CTV News. “‘Dad, I won chocolate!’ ‘No, son, there’s bad drugs in the chocolate.’ How do you explain that to a kid?”

When the kid discovered that he couldn’t chow down on his winnings, “he was mad.”

In a statement, Dawson Creek Minor Hockey Association insisted that the dank raffle prizes were solely intended for adult ticket holders, not children. “Amongst a number of prizes donated was a basket of cannabis products,” the statement said. “The products did not appear on the donation table, only a photo and list of the items contained in the basket.”

Furthermore, the official raffle rules under the BC Hockey and Standard Procedures, as well as the BC Gaming and Policy Branch, do not ban cannabis products as prizes at sporting events, so no one’s going to the penalty box over this gaffe. Canada launched federally legalized recreational, or adult-use, marijuana in late 2018. Weed-infused edibles, as part of the Great White North’s “Cannabis 2.0” program roll-out, became available at the start of 2020.

“The winner chose to take the prize, their identification was checked to ensure they were of legal age (19+), and the donor then delivered the basket to the winners,” the organization continued in its statement. “It was not our intention to upset any of the attendees at the event.”

Competing teams donate $50 worth of prizes to the raffle each year. The proceeds from raffle ticket sales go toward a charity. Although this year’s charity went unidentified in the press, this process suggests that the Dawson Creek Minor Hockey Association wasn’t the only party involved in offering weed at a youth tournament. The team managers, coaches, and/or owners who put together the gift bags were likely responsible, too. 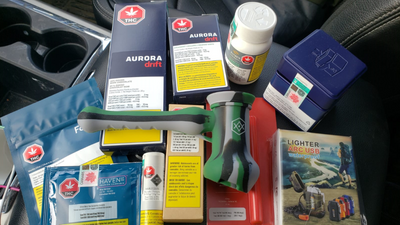 Image of the raffle stash, via

“I was a policeman for 32 years and you… try to protect people from stuff, and then your eight-year-old grandson brings up running into this, it’s just ridiculous,” Redl said. “There is no place for drugs at a child's hockey tournament.”

Of course, getting a kid involved in a sport where the primary attractions are fist fights and trash-talk is just as questionable as offering “drugs” at said sport’s events. Regardless, the Dawson Creek Minor Hockey Association promised to update its rules to prevent this kind of thing from happening ever again.

Now, let’s see a similar ultra-lit raffle bag appear at a sports tournament for grown-ass adults. We can definitely get behind that one.

NEWS
CANADA
CHILDREN
WTF
MORE...
Randy Robinson
FOLLOW
Based in Denver, Randy studied cannabinoid science while getting a degree in molecular biology at the University of Colorado. When not writing about cannabis, science, politics, or LGBT issues, they can be found exploring nature somewhere in the Rocky Mountains. Catch Randy on Twitter and Instagram @randieseljay
Share this article with your friends!
AD
By using our site you agree to our use of cookies to deliver a better experience.
Accept
Decline
MORE FROM MERRY JANE