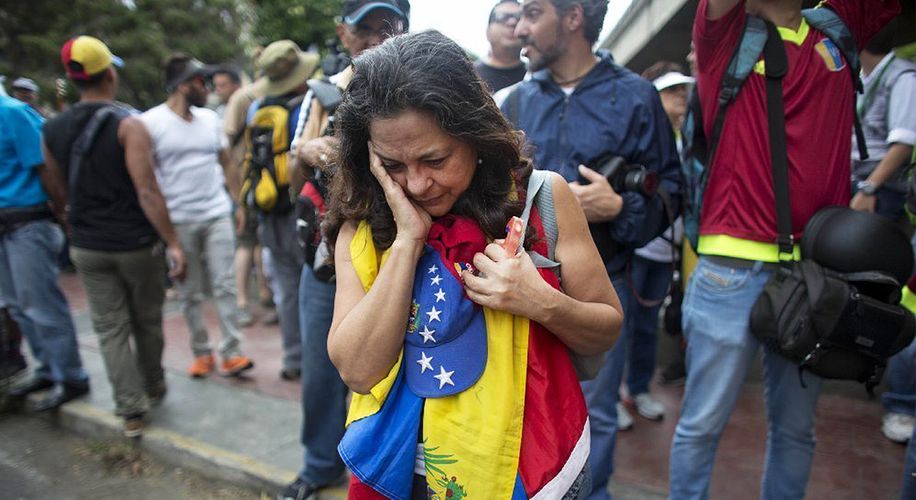 U.S. intelligence officials warned Venezuela, which holds the largest reserves of crude oil, is in danger of collapsing.

U.S. intelligence officials warned Venezuela, which holds the largest reserves of crude oil, is in danger of collapsing.

As a state of emergency is declared in Venezuela and stores run short on food and basic goods, marijuana prices soar to as much as $100 per gram in some parts of the country, including Caracas.

This should come as no surprise in a country where people have trouble even procuring food or basic goods.

Of course, how much you pay for marijuana will have a lot to do with who you know and how you do it.

That means when using the black market exchanges, a marijuana user could potentially pay $1 per gram.

While this might seem like a deal, keep in mind this equates to approximately two full days of work for a Venezuelan.

On Friday, President Maduro declared a two month long state of emergency, claiming it necessary to suppress a “coup” and “all the international and national threats our nation is facing.”

The decision comes after months of long lines for food and basic shortages throughout the nation. People line up in the wee hours of the morning and wait until mid-morning for stores to open. These realities have taken its psychological effect on the country.

MERRY JANE sources, who wished to remain anonymous due to the stigma of cannabis in Venezuela, note price increases in cannabis as in other goods.

Another in English: “Since the currency is debased, and the inflation rate is high, the financial crisis has made it less accessible to the general public.” He noted he and his friends were finding it harder to afford the plant amid the financial crisis.

Currently, sources estimate that - dependent upon the dealer - a gram of cannabis fluctuates between 800 and 1000 bolivars per gram for “Creepy”, the common marijuana found there.

If you use the official exchange rate, that comes out to $100 per gram. While Priceofweed.com indicates prices are astronomically high in some places, MERRY JANE  sources say that, on the black market, 1000 bolivars is approximately $1 - admittedly, a hefty amount for participants of a failed economy.

With oil accounting for about 96 percent of Venezuela’s exports, Venezuelans have been crushed by low oil prices.

The nation has turned towards China for loans, while choosing to decrease imports. The New York Times writes, “[Venezuelan government] has stubbornly avoided sensible long-term solutions, like seeking technical assistance from the International Monetary Fund and other international institutions that rescue failing economies.”

Rival political parties, in control of the National Assembly since December, have pushed, to no avail, Mr. Maduro towards institutional reforms.

On Friday, U.S. intelligence officials warned Venezuela, which holds the largest reserves of crude oil, is in danger of collapsing.

Mr. Maduro, Chavez’s chosen successor, has stated he would take over idle factories and jail the owners. Elected in 2013 to a six year term, he ordered last week “all actions to recover the production apparatus, which is being paralyzed by the bourgeoisie.”

He has threaten to “put in handcuffs” businesspeople who get in the way of production. On Saturday anti and pro government crowds demonstrated in Caracas.

“You can hear the ice cracking,” a U.S. intelligence official on deteriorating stability in Venezuela.

Currently in Venezuela, cannabis is decriminalized. Legally, an individual possessing up to 20 grams, could be arrested and taken to rehabilitation, but not to jail. Of course, it “depends on the cops and how much cash you have with you.”

As a twentysomething Venezuelan told MERRY JANE over text chat: “Generally, the arrested individual will have to complete community service. If you’re stopped with more than 20 grams, however, you are considered a trafficker and you can go to jail for one or two years.”

Among the youth of Venezuela, cannabis is not looked down upon, such as  at University. The plant is freely consumed at concerts and nightclubs. At a large concert, for instance, you might see concert-goers freely indulging in cannabis in front of the National Police and National Guard without consequence.

According to several sources contacted by MERRY JANE, consumption in high school is increasing and partaking a necessity to join popular cliques. While you might not see cannabis on the streets, you are more likely to see it at concerts or in private hangouts.

Considering the crisis of Democracy in Venezuela, there is currently no political movement to pass legislation. MERRY JANE sources sensed that any legalization movements were being negatively affected by the financial crisis.

Although the country is subject to rolling blackouts, Venezuela could look to economically diversify away from oil with the cannabis plant. Uruguay, the first country in the world to legalize cannabis in 2013, provides the only Latin American example of such a policy, and, largely because of bureaucracy and ambiguity of law,  it’s failed to provide an economic boon.