MUSIC
This Is So UnChill: Frontman for Band Wavves Is Landlord Now?
AD
Huh.
Published on February 2, 2019

If you’re going to call yourself something ~groovy~ like Wavves, then spend your career making millennial surf-punk-pop music, it’s probably not the best idea to make your next career turn into becoming a landlord.

Although, reading that back, maybe it’s the only real inevitability in this world. *shrugs*

Whether in or out of character, Nathan Williams, frontman and founder of band Waaaves, has decided that upselling gentrified apartments is his next great creative endeavor. 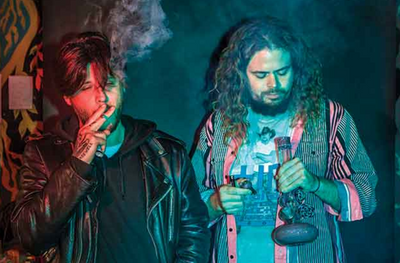 Some musicians make the move to acting — some begin labels to sign other artists. Others, still, simply continue to make music even if no one wants to hear it. But it takes a visionary to realize what other artists simply can’t or won’t: selling over priced real estate is, in fact, very good.

Posting photos of his cozy little creative commune to Instagram, Wavvvvees graciously lets his fans and followers get the exclusive scoop on being his building’s first tenants:

“My apartments in Silver Lake are officially up for lease! Completely rehabbed. There’s 8 total but a few have already been leased as of this morning. 901 Parkman ave. Walking distance to Silver Lake Dog Park, Bar Bandini, Mohawk Bend, Kettle Black etc. If you’re in the LA area and interested or have a friend that needs a place let them know. 1 bed 1 bath. $2995 a month.“ 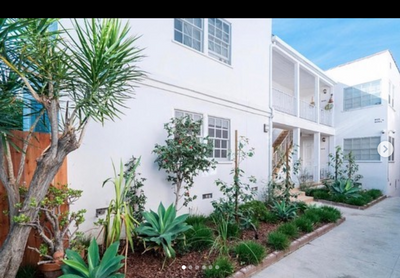 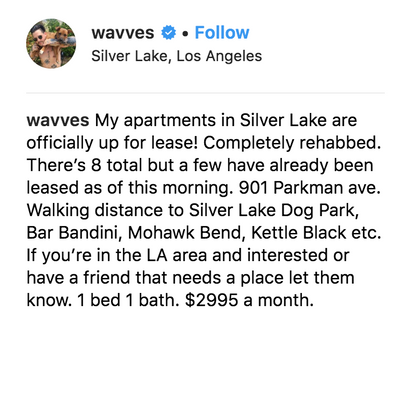 And what is gentrification, if I’m gonna keep slinging that word around?

Some people might say it’s when families in historically non-white neighborhoods are priced out of homes they’ve lived in for years. Others may claim it’s part of corporate homogenization that forces small businesses to close for the incoming chains.

But *I* say it’s when someone who has, like, a band or whatever, decides to philanthropically buy an entire building in a low income neighborhood then benevolently charges only about exactly what most locals make total in a month.

And what’s so wrong about that?

NEWS
REAL ESTATE
LOS ANGELES
THIS IS SO UNCHILL
MORE...
Shelby Fero
FOLLOW
"I'm not too crazy about me either." Follow Shelby on Twitter @shelbyfero
Share this article with your friends!
AD
By using our site you agree to our use of cookies to deliver a better experience.
Accept
Decline
MORE FROM MERRY JANE