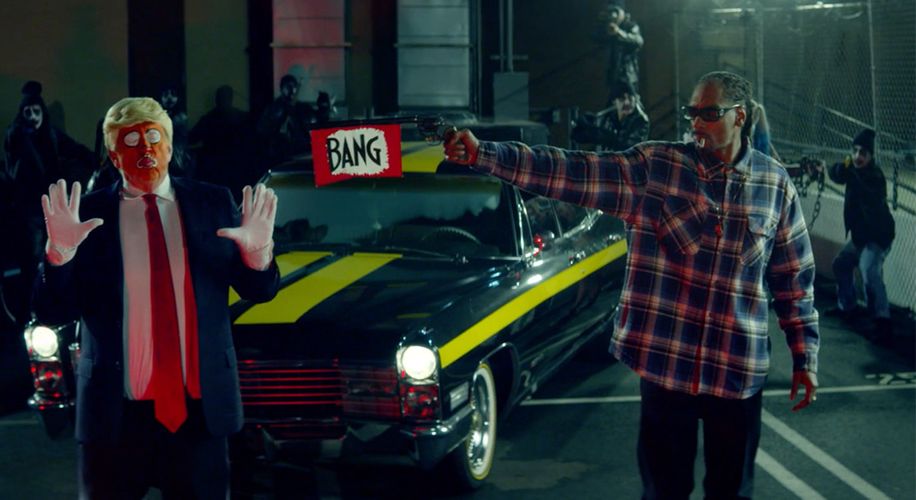 Immigration bans, possible cannabis crackdowns, divisive race-baiting, unrestrained misogyny; these are just a few of the many reasons why U.S. President Donald Trump isn’t very popular nowadays, especially in the hip-hop world. His latest public dissenter is none other than Snoop Dogg.

On Sunday, the Long Beach hip-hop legend released the new joint “Lavender” (Nightfall Remix), a politically charged banger accompanied by a music video that depicts the Commander-in-chief as Clown-in-Chief Klump.

The song is a rework of "Lavender," a collaborative instrumental jam between the Canadian gurus BADBADNOTGOOD and producer Kaytranada. The idea came to Snoop and YouTube star Jesse Wellens during a smoke session while the two were working a video game event back in October.

Released on Wellens' Prankvsprank YouTube channel, the visual starts with renowned actor Michael Rappaport leaving his clownish family and heading to work. His character cruises around smoking a joint, only to get pulled over and shot by an officer point blank, alluding to the lethal police shooting of Philando Castile in July.

The video carries on to satirize President Trump, showcasing him as fool-worthy jester who is trying to deport all the “doggs” from his country. But Snoop isn’t having any of that nonsense, so after spitting a few politically charged bars, the West Coast rapper finds himself pulling a gun on the Trump-ified clown persona and popping off a comical and climatic “Bang” before the pulsating production kicks back in.

It all concludes with a smoke sesh that Trump is clearly not invited to, along with a hilarious commercial for the fictitious cannabis-friendly cereal Snoop Loops.

Although the “Lavender” visual accompaniment certainly has it’s comedic elements, the song itself is extremely somber and earnest.

BADBADNOTGOOD and Kaytranda provide a slippery and bass-heavy beat, as The Doggfather lays down his most political bars to date.

“Resident evil, it's all on camera and they still don't believe you/Clownin' around, don't come your clown ass 'round here nigga you gon' get down,” he spits.

Uncle Snoop recently explained the concept of the song and video to Billboard:

“The ban that this motherf--ker tried to put up; him winning the presidency; police being able to kill motherf--kers and get away with it; people being in jail for weed for 20, 30 years and motherf--kers that’s not black on the streets making money off of it -- but if you got color or ethnicity connected to your name, you’ve been wrongfully accused or locked up for it, and then you watching people not of color position themselves to get millions and billions off of it. It’s a lot of clown sh-t going on that we could just sit and talk on the phone all day about, but it’s a few issues that we really wanted to lock into [for the video] like police, the president and just life in general.”