MUSIC
Rico Nasty's MERRY JANE Spotify Playlist Takeover
AD
The Baltimore-based rapper did it big this year. After appearing on magazine covers, signing to a major label, and headlining a sold-out tour, Rico has compiled some of her favorite tunes for us here at MERRY JANE.
Published on August 17, 2018

Rico Nasty done did it this year. The Baltimore-based artist not only released her critically-acclaimed mixtape Nasty, but signed to Atlantic Records, graced the cover of FADER, and appeared twice on MERRY JANE’s very own talk show, About That Time. Not to mention the sold-out NASTY tour, which wraps in September.

The rapper, sometimes known as Tacobella and Trap Lavigne, has already proven that she’s got inimitable, eclectic taste on top of her hard-as-nails bars — just take a gander at her various kits and you’ll say no more, fam. The “Sugar Trap” star is on the up-and-up, and this is only the beginning for Rico. To celebrate her landmark trip around the sun, we asked the hitter to share some of her favorite tunes, as well as talk about some stand-out stoner moments from the past year.

Check out Rico Nasty’s MERRY JANE Spotify Playlist Takeover below, and continue reading for our interview with Baltimore’s finest. 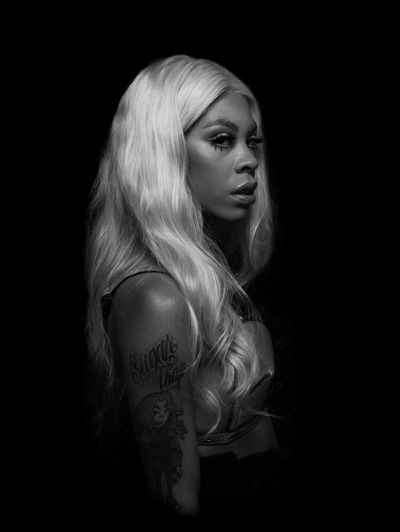 MERRY JANE: What is your most memorable smoking experience?

Rico Nasty: Smoking with Wiz Khalifa, yeah lowkeyyyy may have out sparked him. I don’t know if he went to sleep because he was tired, but he definitely went to sleep. Yeah, he was knocked out.

If you were to invent a new strain of weed, what would you call it?

I would call it Death Drop, like the voguing move. It would be an indica for sure.

If you were a pro athlete, what would be your warm-up track?

It would have to be “Bitch I’m Nasty” by me.

If you were going to go out guns blazing, what song would you choose to do it to?

I’m going to have to say “Kids” by MGMT.

Who is your guilty pleasure artist?

I have a lot of weird shit that I like, but I’m going to have to go with Tyler the Creator to stay on the safe side. I’m like obsessed with him. My favorite album is Goblin. I like Bastard, too. I just like his story telling.

What’s your favorite album to listen to while smoking weed?
I literally just put this one on — anything by Tame Impala.

What song most reminds you of your childhood?

You’re about to wrap up the sold-out NASTY tour — big congrats! What city had the most wild audience?

I want to say that my home city, ‘cause it was the biggest stage I performed on and like two people passed out in the mosh pit.

What was your pot consumption like while performing and traveling?

You just dropped a new track called “Big Dick Energy.” Besides yourself, who else out there is currently repping the BDE life?

After a huge year, with the album, tour, and two “About That Time” star appearances, how are you going to close out 2018? Any other projects coming out, or are you taking a well-earned vacation?

I’m probably gonna drop another project before the year’s over, but yeah other than that I am going to relax. But you can’t relax too much — it’s only the beginning. I’ll probably give y’all some cool ass videos or something.

Anything else you wanna say before you go?

My boyfriend got BDE, too.

For more on Rico Nasty, including upcoming tour dates and merch, visit her website here

420
BUSINESS
INTERVIEW
MUSIC
MORE...
MERRY JANE Staff
FOLLOW
MERRY JANE is based in Los Angeles, California and is dedicated to elevating the discussion around cannabis culture.
Share this article with your friends!
AD
By using our site you agree to our use of cookies to deliver a better experience.
Accept
Decline
MORE FROM MERRY JANE