MUSIC
MERRY JANE’s Spotify Playlist Takeover: SEMMA
AD
The UK’s next pop icon shares her favorite tunes of the moment and discusses her new EP, “Ribbons & Bows.” In her words: “I wanna take you on a vocal rollercoaster ride."
Published on April 11, 2019

Welcome back to another edition of MERRY JANE’s Spotify Playlist Takeover series. For this installment, the up-and-coming (and soon to be iconic) pop sorcerer Semma compiled a mix of some seriously slamming tunes, both new and old.

“It's an anytime, anywhere listen kinda playlist,” explains Semma. “It’s got a very ‘90s throwback vibe, but with some futuristic elements in there.” This description mirrors the artist’s own music, which takes cues from vocal powerhouses in the vein of Whitney, Mariah, and Madonna while sounding anything but dated.

That’s partially thanks to producer Kingdom, whose gift for creating sui generis soundscapes is rivaled by few. Together, the two have crafted Ribbons & Bows — one of the most nuanced and hair-raising records of the year so far.

Semma will be performing tonight in LA alongside Kingdom and Fade to Mind fam Girl Unit. Get your tickets here, and keep reading for both the playlist and an interview with the rising star.

MERRY JANE: Can you tell me about the EP name Ribbons & Bows? Where does it come from and what does it mean to you?

Semma: Ribbons & Bows was the first track I wrote on the EP. I wanted something ultra feminine for the title, almost dream/fantasy-like. I keep a lot of titles under my sleeve to use in future music. I'd had this title for a long long time, and I knew I wanted to use it.

Kingdom had started this shimmering ballad, which was quite different from what he'd played me before. It was very classic sounding and I instantly heard a ballad. It's actually very Stevie Wonder, inspired on the melodic side and even lyrically. The imagery of Ribbons and Bows is very decorative and embellished, and that's how I like to use my voice — everything a little over the top and fancy.

As the title is super girly, it was a conscious decision to make the EP cover go against the title. It's a hard, monochrome, ‘90s-inspired image. Black leather and vinyl. No pink, no frills and no bows.... but that another side of me [laughs]

When did you start singing, as well as writing music? Were there any particular albums or artists who inspired you to start creating your own stuff?

I've always sang as far back as I can remember, but definitely around the ages of five or six, is when it really took over. I would sing whole Disney soundtracks. Musicals, Grease, and then I was blown away by Sister Act 2. I did this R&B version of Annie's “Tomorrow,” and my family would ask me: 'Why do you say 'ta-hoo-morrow' instead of tomorrow?’ I was just a little kid singing soulfully. We'd have screaming competitions, but I would always scream the highest. I later realized that I was just using my whistle register.

In the background, there was more iconic stuff being played Janet Jackson, Britney, Michael, Madonna. I loved George Michael, too. Then there were the divas I discovered a few years later. Whitney, Celine Dion... but I liked Mariah Carey the most, not just for her range, but when she sang about not fitting in in her childhood, I felt that.

I guess I wrote my first song at around 11 and never stopped. I started with music so young and I have a built-in mechanism that I'll take with me forever. It's just a part of me. I'm not really interested in trends, I just like what I like. I like 'over the top' ad-libs. I like high notes. I write whatever comes from the heart and I don't really think about what's 'in.’ I wanna take you on a vocal rollercoaster ride. I feel like singing so young was such a blessing; it prepared me. I was this lonely kid who sang for hours, but never told anyone. Hours of self training made me who I am.

If you were a pro athlete, what would be your warm-up track?

Beyonce's “Flawless” remix feat. Nicki Minaj. There's something about listening to Beyonce when you're working out or warming up. You get a little more power. A little more drive. You get things done. She such an inspiring woman. All that energy... but with grace. I'm far from an athlete, but I feel I can run a couple of marathons after listening to Beyonce.

What was the recording process like for the EP? How long did it take? What was the studio vibe like? Were there any rituals or traditions you and Kingdom embraced while working together?

A few of the songs were started with him being in LA and myself in London. I feel like I write best when I'm on my own, as I like to sing out loud, to test the notes and how it would sound in full voice. So flying to LA and writing in the studio was quite a new experience for me, in the sense that I'm very picky and I usually don't like the really quick stuff you come up with in the studio... like writing lyrics just to fit. That's not me. I like to sit back and sing the line a thousand times over, but there isn't time for that in the studio.

But with Kingdom, we tried new things like using my vocals to ad-lib throughout the instrumental and picking out the cute melodies. It was a new way of working for him, too, and it worked. He sent me the recordings of my ad-libbing and it was almost like you could hear the words, even though I was just humming. I'd go back to my Airbnb in-between studio days and finish the lyrics. The atmosphere was very chill, not pushed… sometimes we'd start off with some Aaliyah music videos or go hiking to clear our minds. We both liked working late.

He's so talented, soft spoken, and sensitive cancerian, like me, but we don't take no shit either. He put me at ease, let me be vocally free, and inspired me to forward think. He'd sometimes say, 'It's better like this.’ I'm quite stubborn, but a few days later I'd listen back and think, Yeah, it does sound better like that.

If you could open for any living artist on tour, who would it be and why do you think they’d make a great tourmate?

Probably Drake. Drake, Madonna, or Ariana. Drake and Madonna, they're seasoned professionals. I mean firstly if you open from Drake, what a platform! I'd give the audience a little feminine vocal showdown before he came on. I'm very different than Drake, but I'm still R&B. I'm still hip-hop inspired… we both make heartfelt music.

Imagine the stories Madonna could tell? The wisdom. What a woman! I'd ask her about The Blond Ambition Tour, about The Gaultier Conical Bra, and reinvention — what it's like to be an artist of that magnitude and how I've never ever stopped playing The Immaculate collection after I found it in a box in my house.

And you know Ariana — she's cute, she looks fun, we could do warm ups backstage and humidify together.

What’s your go-to break-up or rainy day album? Something you always listen to while in a bummer mood?

Alicia Keys, Songs in A Minor. Reminds me of being a kid. Her first two albums are so special to me. It can be so hard trying to make it as a singer. You can really hear her pain on this [record]... there's a lot of waiting around, waiting for music to be released so I just feel a connection to these albums. The songs remind me of female ‘70s Stevie Wonder tunes, so stunning, it just takes me to another place. I also listen to the Stevie ballads when I'm down. He's such a joyous soul, but he really knows how to write lyrics and melodies that capture sadness. Them chords and them melodies... there's only one Stevie Wonder. 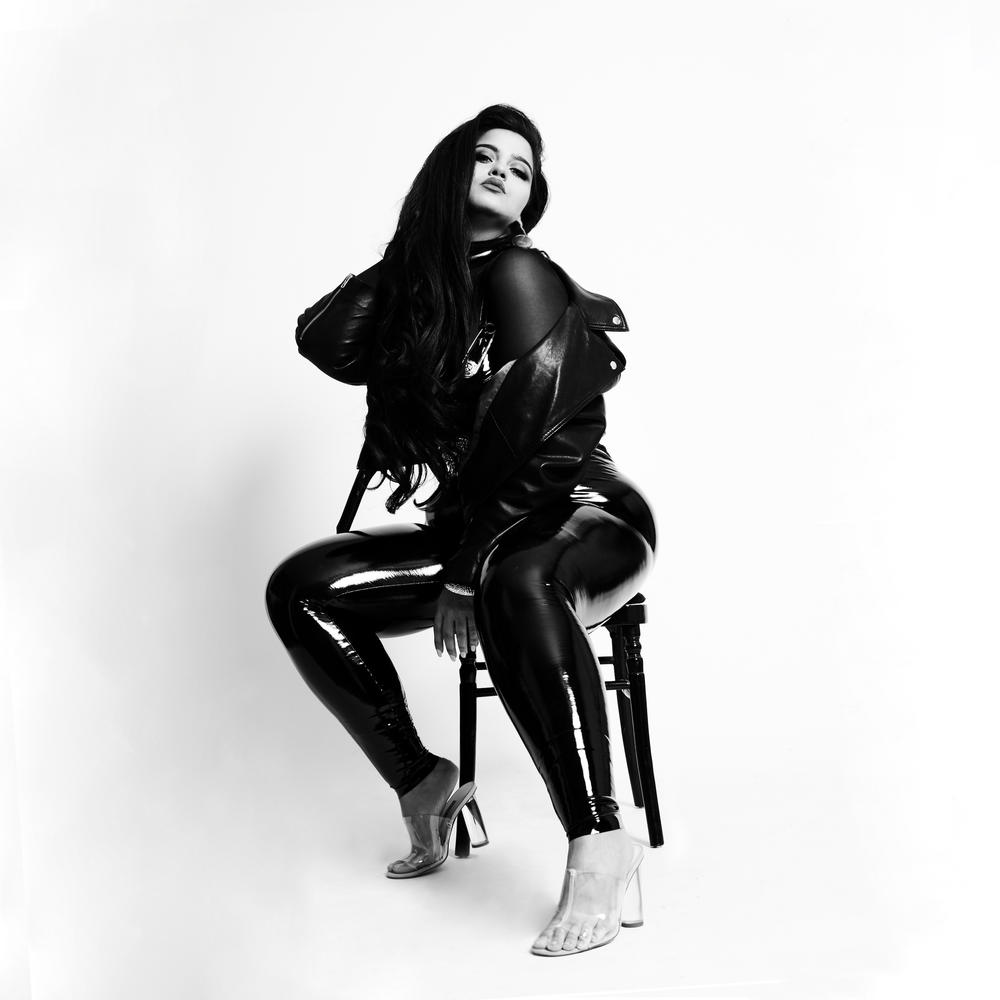 Probably “Ribbons & Bows,” the title track. It set the tone for the EP and gave me the confidence that what Kingdom and I were offering was something different. “Life is too precious to spend it with someone who's uncertain of their heart.” A lot of people DM me to tell me how much they love that song… especially this line. It's like you can give someone the world 'the ribbons, the bows,' but it won't make them love you. You can't force anything in this life and if it's meant to be, it'll be.

Anything else you'd like to add about your playlist picks? How would you describe the overall vibe of the playlist? What environment should people listen to it in?

The playlist wanders through dream-like and reality. It's got a very ‘90s throwback vibe with some futuristic elements in there. There are a lot of my influences, too, but I've mixed it up with some new and current artists that are on my earphones at the moment. I wanted to close on a classic Madonna cut, just because it's so iconic and ethereal and leaves you feeling uplifted. Because at the end of the day, music is an escape. It's an anytime, anywhere listen kinda playlist.

MUSIC
CELEBRITIES
CULTURE
SPOTIFY PLAYLIST TAKEOVER
MORE...
MERRY JANE Staff
FOLLOW
MERRY JANE is based in Los Angeles, California and is dedicated to elevating the discussion around cannabis culture.
Share this article with your friends!
AD
By using our site you agree to our use of cookies to deliver a better experience.
Accept
Decline
MORE FROM MERRY JANE