For this week’s special edition of our MERRY JANE Spotify Playlist Takeover series — presented by our friends at Namaste Technologies — we’ve got a sprawling, kaleidoscopic journey through sound, courtesy of Phony Ppl.

Despite the tongue-in-cheek name, Phony Ppl are truly the real deal. The five-piece band hails from Brooklyn, and each member is both classically-trained and future-focused when it comes to making tunes. Featuring Elbee Thrie (vocals), Elijah Rawk (guitar), Aja Grant (keys), Matthew Byas (drummer), and Bari Bass (bass), the group’s sixth LP mō'zā-ik is an iridescent splash of jazz, funk, soul, and more — though you could accurately describe their genre-jumping sensibility as “pure vibes.”

In celebration of the crew’s new record, plus their upcoming tour alongside Pusha-T, we chatted with Phony Ppl about their in-group smoking routines, why mō'zā-ik feels like “walking through a museum,” and how they’re already working on a follow-up album. Plus, we’ve got their sexy Spotify playlist below. Take a big inhale, hit play, and let these music maestros take you to another dimension.

MERRY JANE: What is your most memorable smoking experience as a full band?

Phony Ppl: There are too many great moments to list, but a lot of the best moments happened at MaffYuu’s house! From getting lit for the first time on the back porch and acting complete fools in the casa, to Getting one of our bandmates high for the first time on the roof, 10+ people cyphers with one skimpy-ass joint, to post-rehearsal smokinG and jamminG, we’ve done it all. Some of the best songs came out of jamminG and smokinG and forgettinG that voice memo is on!

Do you have any in-group smoking rules or rituals? Be it “pass to the left,” or a designated joint roller?

Just don’t Love Up the El. People who kiss and make out with the blunt are out of pocket.

What album do you like to listen to together while smoking weed?

When we're smokinG, we're usually jamminG to some random Youtube videos, live performances of our favorite artists, old Brazilian funk and soul tunes. A specific album that's really near and dear to us smokinG, when we were younG LunG Boi’Ce, was Jamiroquai's Space Cowboy. That album kicks mad ass always. 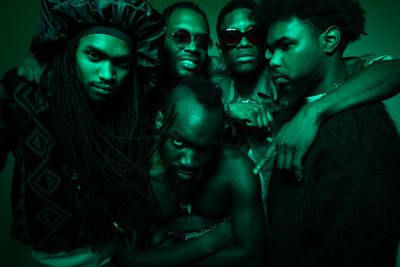 Do any members of the band have unique relationships with weed? Whether someone who doesn’t smoke, or someone who, say, only vapes or smokes spliffs, etc.?

We usually smoke fronto w. the Paper, but straight paper and trees is great, too. Not too many blunts for us, but we do enjoy a good Backwood from time to time. Aja and Bari don’t smoke too often; it’s always a special occasion when they join the sessions cause they prefer the straight.

Can you tell me about the album title — what does mō'zā-ik mean to you? And why did you choose the stylized spelling?

In addition to that, we felt as though each song was its own work of art, so to speak. When we were thinking of names for the album, we tried to visualize what it would look like if the album were a physical place. And we collectively came to the idea that it felt like walking through a museum, and every song was like its own room with its own colors and smell and theme. 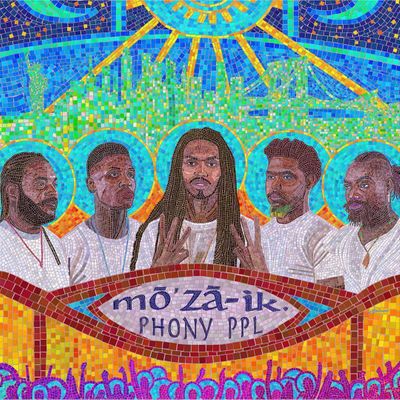 What was your weed consumption like while writing and recording the record? Do you smoke before getting in the studio?

During the creation of this album we were smokinG reGularly how we usually get down. Some of the members who took a lil break from smokinG found their lunGs aGain, so the sessions have been really sweet. Elijah, MaffYuu, and Elbee usually are always high. DependinG on the session, Aja and Bari might get lit, too.

If you could tour with any band that’s still performing, who would you pick and why?

Earth Wind and Fire! We love the music so much! We grew up on it! We could learn so much from seeing them performing every night. They’re such a household name for a black band with positive, energetic, emotional music. We strive for that without a doubt.

If you could watch a “first listen” reaction video to mō'zā-ik from any living person, who would you pick? Why would you be curious about their response to the record?

Stevie Wonder!! We can see him movinG around JamminG out to “Once You Say Hello” so hard! He really feels music in such a special way. From how he plays, sings, dances around on his instrument — we’re all about that, havinG fun and being excited about being a musician. We think he’d enjoy our music.

Do any members of the group have guilty pleasure artists? Meaning someone everyone knows they love, even if it’s kinda embarrassing?

Elijah RawK: OK to SOME people this might be regarded as a guilty pleasure, but we couldn’t care less. I personally love Shania Twain and could listen to her every day. I always have always been more of a N*SYNC fan than a Backstreet Boys fan. I also used to really like P.O.D .

MaffYuu: I really REALLY like the music from Sonic Adventure 2: Battle; I love a lot of sonic music and video game music.

Anything else you want to add about your song picks for the playlist takeover?

This playlist is for you to get into your smokinG groove, the whole rollercoaster of emotions you go through while smokinG. This playlist is gonna get that out of you. Enjoy with your favorite person or by your lonesome — it’s all good, it’s always lit.

What’s next for the band after the album comes up? Are you touring? Or is it time for a much-needed vacation?

Believe it or not, we’ve actually already started working on the next project! We took such a long time to put this one out that we want to really get a start on the next one now while our momentum is still up and we’re able to be around each other frequently.

We had about 30 songs that we filtered down to 11 for this album, so we already have a good start on the next project. I have a feeling the next one is going to be completely different from mō'zā-ik.

Also, we’re going on tour next month! About to be on the road doing some dates with Pusha T, as well as some headline stops along the way. I think we’re a long way away from vacation though Too much left on the bucket list! 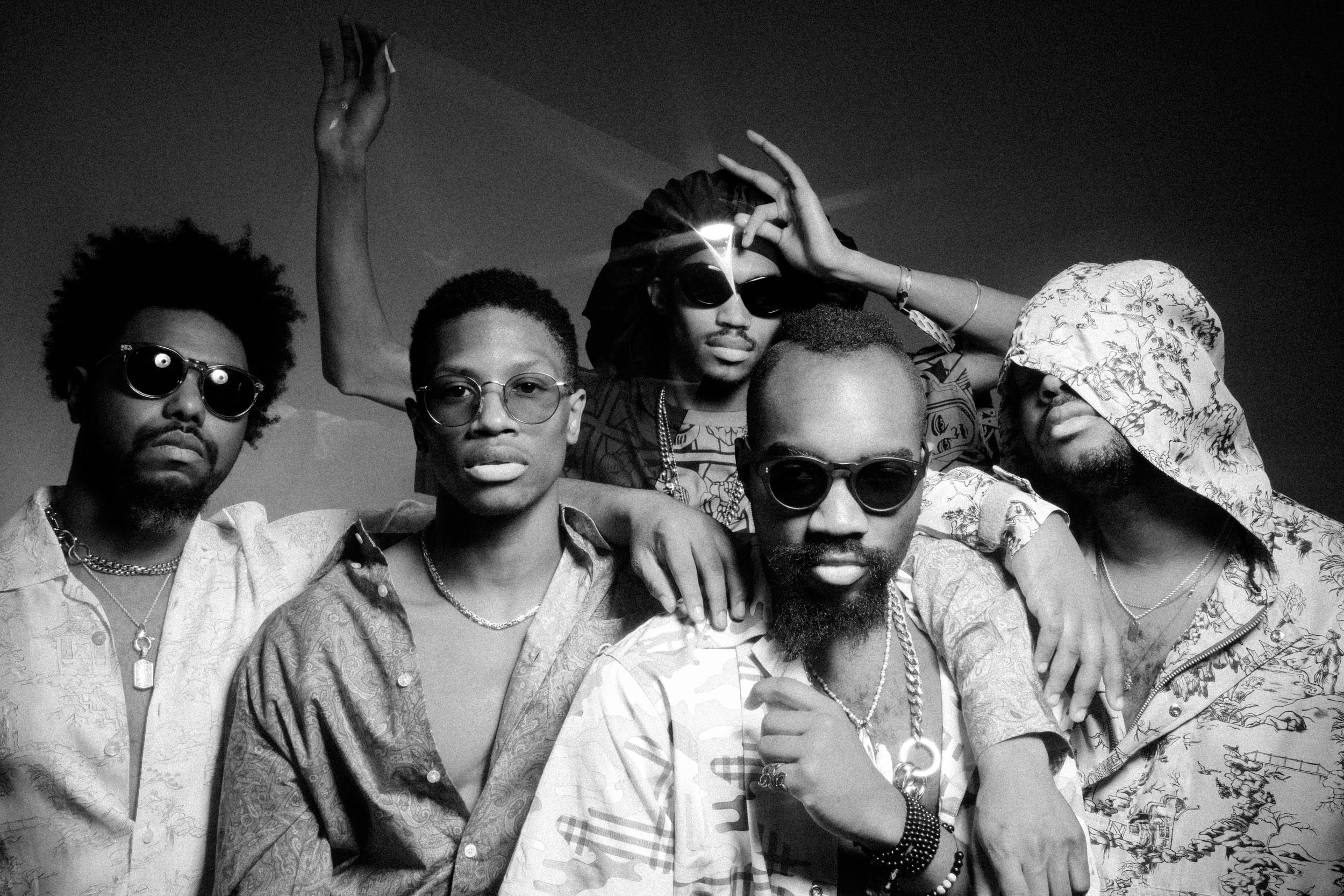 For more on Phony Ppl, visit their website here and get their new record on Spotify

420
INTERVIEW
ENTERTAINMENT
MUSIC
MORE...
MERRY JANE Staff
FOLLOW
MERRY JANE is based in Los Angeles, California and is dedicated to elevating the discussion around cannabis culture.
Share this article with your friends!
AD
By using our site you agree to our use of cookies to deliver a better experience.
Accept
Decline
MORE FROM MERRY JANE