HEALTH
Weed 101: What Happens When You Mix Marijuana with Alcohol?
AD
Combining booze with buds is an American past time, but is cross-fading ever a good idea? That really depends on what you’re going for, and how well your kidneys and liver function.
Published on March 4, 2020

Some of you reading this might love chasing shots of Patron with a few puffs of pot. And we don’t blame you. Combining booze with buds can make for an awesome experience, so long as it’s done responsibly.

But given alcohol’s toxicity and cannabis’s penchant for, uh, clouding the mind, is it ever a good idea to mix these two party favors? And what are the short- and long-term effects of doing so, besides getting lit AF?

If you’ve ever cross-faded, or combined alcohol with cannabis, then you know what happens next: The feel-good fizziness of alcohol combines with the hazy half-lidded effects from the weed. For some folks, this means passing out, only to awaken with a wicked hangover and an even wickeder case of the munchies. For others, this means getting absolutely wrecked without a care in the world. Still others may ride somewhere between these two extremes. 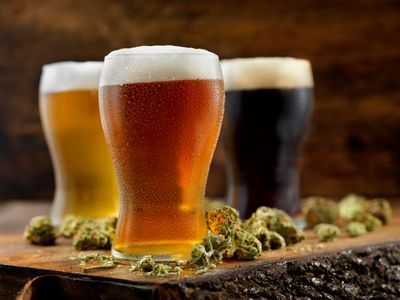 The Short-Term Effects of Consuming Bud and Booze

When someone imbibes alcohol, a bunch of it enters the bloodstream after passing through the digestive system. Once these little alcohol molecules hit the nervous system, the brain starts pumping out a chemical called GABA. GABA reduces, or slows, our brain’s signals through the body. That’s why people feel numb and lose balance and muscle strength when they’re drunk. And GABA release also stimulates dopamine release, which is how a few shots at the bar gives us those feel-good vibes (at first, anyway).

When someone consumes cannabis, THC, cannabinoids, and terpenes enter the blood, too. THC hits the nervous system’s CB receptors, which also ends up releasing dopamine. So, when you combine booze and buds, you’re doubling up on the dopamine release (and the release of other neurotransmitters like serotonin, but we won’t get into that here). Hence, you get doubly fucked up.

But the addition of alcohol with that weed changes the body’s metabolism and chemistry. Both THC and alcohol ultimately get filtered out of the blood through the liver (and, to a lesser extent, the kidneys). Booze has a tendency to really gunk up the liver’s works, so as the liver slows its clean-up process to metabolize the alcohol, THC ends up waiting in line, essentially.

This is why you may feel intoxicated for much longer when mixing weed with drinks, because it’s taking longer for your body to clear out both substances when they’re taken simultaneously. Staying intoxicated for longer periods is especially true if you ate your weed as an edible or drinkable, since the THC you ingested gets converted to a more potent form in the liver if swallowed (and this is why edibles and drinkables get people much higher than simply smoking a doob).

Furthermore, weed and alcohol affect how quickly either substance is absorbed by the body. Basically, alcohol gets absorbed slower in the presence of weed, but weed gets absorbed faster in the presence of alcohol because of the way booze opens up the blood vessels. Again, this absorption thing rings especially true when eating cannabis, since alcohol’s effect on the blood vessels is most pronounced in the digestive system. 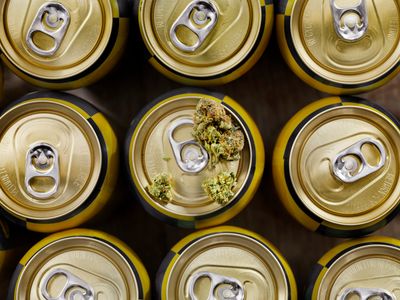 The Long-Term Effects of Cross-Fading

OK, you already knew that hitting a bong and chugging a beer will get you more lit than doing either by itself. But for folks who regularly cross-fade, are there any inherent dangers — or benefits — to consuming weed and alcohol at the same time?

Scientists are still studying the effects of weed on booze consumption, but there’s evidence that cannabis could reduce, prevent, or even reverse some of the damage caused by drinking alcohol. A 2018 study looked at hospital records of over 300,000 patients and found that people who consumed cannabis and got drunk showed lower rates of liver disease than patients who only drank booze.

How does weed protect the liver from the ravages of alcohol, despite alcohol’s powerfully destructive effects on the body? We aren’t sure, but it may be due to cannabis’s ability to protect certain cells. Cannabis also regulates insulin — the hormone that breaks down our blood sugar  — which contributes to liver health. So, it’s possible that weed indirectly shields the liver from alcohol damage by keeping our blood sugar levels balanced. Possibly.

(Note: That cannabis could minimize liver damage from alcohol is not an endorsement of combining weed and booze. There’s no scientific consensus on that claim, so if you mix the two, you do so at your own risk, party animals.) 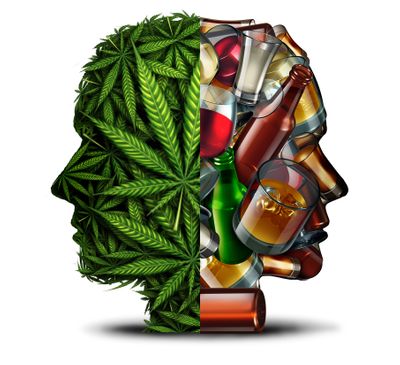 Mixing weed and alcohol isn’t all rainbows and sunshine, though. For people prone to addictive behaviors, doubling up on joints and Jim Beam could trigger a feedback loop where the dopamine spikes from the weed and alcohol reinforce one another. In other words, combining the two could make you more prone to becoming psychologically dependent on either or both substances, too. In fact, tokers are at a five-times greater risk of becoming alcoholics than people who just swill booze by itself. And if you smoke tobacco along with weed and drinking, you’re basically tripling-up on the addictive potential. (To borrow from the great Rick James: Dopamine is a helluva neurotransmitter!)

Regardless, mixing weed and alcohol sometimes probably isn’t a big deal. In fact, cannabis can fight nausea and prevent vomiting, making it an ideal hangover treatment. Just don’t ever smoke and drink and drive, because the last thing we need are more intoxicated drivers crashing their cars.

HEALTH
ALCOHOL
THC
RESEARCH
MORE...
IN THIS STORY
CBD
Click to shop at our CBD store
Randy Robinson
FOLLOW
Based in Denver, Randy studied cannabinoid science while getting a degree in molecular biology at the University of Colorado. When not writing about cannabis, science, politics, or LGBT issues, they can be found exploring nature somewhere in the Rocky Mountains. Catch Randy on Twitter and Instagram @randieseljay
Share this article with your friends!
AD
By using our site you agree to our use of cookies to deliver a better experience.
Accept
Decline
MORE FROM MERRY JANE