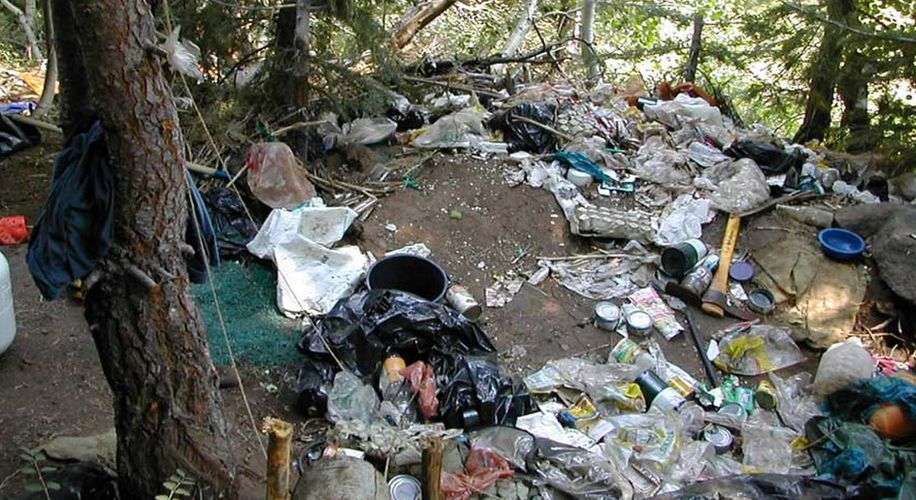 Humans and animals are at risk of being poisoned by toxic runoff from illegal pot grows.

Humans and animals are at risk of being poisoned by toxic runoff from illegal pot grows.

The U.S. Forest Service has recently discovered that California's national forests are being polluted by toxic pesticides used in thousands of illegal cannabis grows. Additional research has found that the problem is spreading, as the chemicals are beginning to seep into rivers and streams, potentially poisoning humans and wildlife.

Law enforcement officials estimate that around 90% of all illegal cannabis farming takes place in California. Many of these illegal growers are using fertilizers and pesticides that have been banned by the FDA due to their toxic effects. Carbofuran, one of these banned pesticides, can cause headaches, nausea, vomiting, convulsions, and even death to humans or animals that consume it. Diazinon, another chemical found at many illegal grows sites, can cause breathing difficulties, weakness, blue lips, convulsions, and coma.

Ecologist Mourad Gabriel, who has been researching the effects of toxic pollutants on California forests over the past several years, has discovered traces of carbofuran, diazinon, and other chemicals in eight Northern and Central California watersheds. The ecologist's tests found that about half of the streams in these watersheds tested positive for contaminants. “Carbofuran is in the water, and it’s not supposed to be,” Gabriel said. “How are we going to mitigate something like that?”

Law enforcement have been working to shut down and clean up as many illegal farms as they can, but pesticides used at these sites can pollute the land and water for years. Gabriel said that he discovered diazinon in streams near Brush Mountain a full three years after police shut down a growing operation in the area. “It’s like a layer cake,” he said. “They put chemical on chemical on chemical. We’ll find different chemicals in the water in different years.”

The affected watersheds serve as a source of drinking water for vulnerable animal species such as the Northern Spotted Owl and the Pacific fisher, as well as for humans and livestock. “I don’t drink out of the creeks - and I used to,” said Trinity County police Sergeant Nathaniel Trujillo. “I grew up drinking out of them.” Trujillo and his law enforcement dog both nearly died from pesticide poisoning after coming into contact with contaminated water at an illegal grow site.

In Trinity County, officials will debate whether or not to authorize a testing program on the Trinity River and its tributaries later this month. “Maybe six months down the road we’ll say water quality wasn’t affected all that much,” Trinity County Planning Director Leslie Hubbard said. “But maybe we’ll say we have a disaster on our hands.”

Local officials have also announced plans to regulate pesticide use on cannabis farms, but this may have little impact since the majority of growers are already operating illegally.