HEALTH
Stoned Sex: Help! My Partner Says I’m Addicted to Weed
AD
Have a partner who says you smoke too much weed? We all know what that's like. Here's what you need to know when navigating this common, albeit annoying, relationship hurdle.
Published on January 8, 2020

For this week’s edition, we’ll discuss the complications of dating someone who thinks you’re a "weed addict." Stoned Sex runs every other week, so make sure to stay tuned for the next dose.

We all piss off our significant others. Some make their partners mad by leaving their laundry on the floor. Stoners, on the other hand, do it with their incessant consumption of weed — ash residue obviously included.

What pothead hasn’t laughed hysterically for five minutes at how funny their partner looks when they get grumpy? Partners usually don’t like that. They also don’t like when you try to navigate the New York City subway after eating an edible and arrive 30 minutes late to dinner as a result. But there's a major difference between annoying your partner with #stonerproblems and someone calling you a marijuana addict, which, let’s admit it, is pretty misguided. That said, what if your consumption habits are directly and negatively impacting the relationship?

Since dinosaurs roamed the Earth, potheads (and I use that as a term of endearment) have marched and screamed that it’s impossible to become addicted to marijuana. On the flip side, prohibitionists and conservatives have howled about marijuana being an addictive, dangerous drug since — well, conservatives don’t believe in dinosaurs. But these wholesome goody-two-shoe-types have been touting anti-weed rhetoric for eons. To their credit, weed is still a Schedule I drug (while somehow cocaine is a Schedule II). So, if we're taking what the feds have to say as legitimate information (lol...), it's no surprise why the Nancy Reagan accolytes of the world believe weed is a harmful substance.

In a relationship, though, how can you prove that you don't have a abusive relationship with cannabis? And furthermore, is pot actually addictive? For all the couples out there currently squabbling about it, the issue is nuanced. 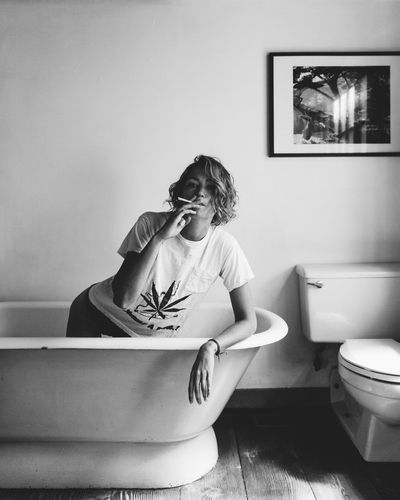 What Is Addiction, Anyway?

We throw around the word “addiction” a lot. But there's a scientific difference between dependency and addiction, according to Jordan Tishler, MD, a cannabis specialist from Harvard.

“Dependence is a physical or physiological process. If you use a substance, and your body gets used to that substance, then if you stop [using] the substance, you can have symptoms of withdrawal. That’s known to happen with cannabis, and I see it in my practice upon occasion. But it doesn’t happen very often.”

Dr. Tishler explained that the current literature estimates that cannabis users have about a 7 percent chance of developing withdrawal, which usually includes three to seven days of crankiness and insomnia. (Or sometimes seeing ghosts...)

Also, dependence isn’t always a bad thing. If you’re a medical marijuana patient who consumes daily to treat pain, anxiety, PTSD — whatever — under a doctor's supervision, it’s possible you’re dependent on cannabis. Guess why? It’s your fucking medicine. Most people who are prescribed antidepressants or antianxieties are probably dependent on their medicine, too. But it’s generally acceptable in our society to medicate with pills. That’s why we don’t give them the same type of “addict” flack as cannabis users. And we shouldn't — that's harassment and mental health stigmatization.

If you’re a medical patient using cannabis as directed by your doctor and someone calls you an addict, you have every right to tell them to shove their head in a toilet and never call you again. Why? Because calling someone an addict for using medical marijuana is unethical. It also means you’re a judgemental asshole. And who’s got time for assholes? No one.

It’s crucial for everyone to accept that cannabis is a medicine. From a harm-reduction standpoint, medical marijuana saves hundreds — if not thousands — of lives. Think about it: If a patient with back pain regularly took opiates, or an anxiety patient used benzodiazepines instead of cannabis, their experience with dependence and withdrawal naturally becomes much dicier. Opiate withdrawal is an excruciating trip down the Vomit Express and could be fatal if it's not mamanged properly. Similarly, getting off benzodiazepine can give you a seizure, and then kill you. Cannabis withdrawal, on the other hand, will not give you a seizure, will not make you violently ill, and it certainly won't kill you. And you can’t overdose on weed the way one can with opiates or benzos (especially when paired with alcohol).

So, when does dependence end and addiction begin? Put simply, addiction is when a substance starts to fuck up your life.

“I describe addiction as a set of maladaptive behaviors that develop around the use of a substance," Dr. Tishler said. "We think about people who drink too much alcohol and beat their spouses, or people who use opioids and rob a liquor store so they can buy a fix. Generally, things of that magnitude we don’t see with cannabis users."

Dr. Tishler continued, “I think addiction is not a large feature of cannabis-use. The definition of addiction just noted involves the sort of behavior that might be harmful to a person’s life [and/or] social relationships.” 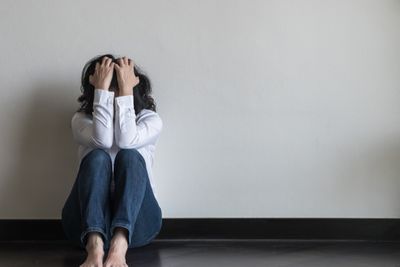 What Is Harmful Use, Anyway?

If the issue of weed addiction arises in your relationship, you and your partner need to be brutally honest about yourselves individually, each other, and the situation.

Let’s start with the cannabis user: Is your marijuana use negatively interfering with your life? That can be a tricky question, because showing up late to a date after getting lost on the subway could be a negative life interference. But it’s certainly not as harmful as alcohol-fueled violence. If getting stoned turns you into a lazy piece of shit who ignores your partner and other life responsibilities, then it’s probably time to step back, take a tolerance break, and see how your life changes.

For those on the Nancy Reagan side of the equation: Are you using the word “addict” to manipulate your partner because you hate the smell of weed smoke and are (still) scared of marijuana? Are you scared of your partner (and therefore, you) being judged by others because your conservative parents told you that pot is for losers? Or, are you thinking in rational terms and genuinely concerned for your partner, their health, and your relationship?

After playing the honesty game, everyone in the relationship needs to act like mature humans and communicate. If you can't do that, the relationship was never going to work out any way. You might as well cut your losses.

“There should be a fact-based conversation rooted in kindness,” said Dr. Tishler, who explained that this relationship issue comes up in his practice frequently. “I will sit with a pair of them and mediate or guide that conversation so, at the end, everyone supports some sort of use that is beneficial to the patient.”

It’s a shame there aren’t more Dr. Tishlers in the world because, unfortunately, due to sociopolitical and legal reasons, not all doctors speak on behalf of the patient when it comes to pot.

That said, if you haven’t had sex in months or showered in days because you’re too damn stoned: Yes, you have a problem and need to chill out. However, if you’re just a little annoying or sloppy when you’re high, there’s likely an area of compromise. In other words, the relationship with your partner and your pot can remain. And if it’s issues like the smell of weed smoke bothering them, switch to a (legally sourced) vape or medicate with edibles.

Been accused of acting flaky? Cut back on your cannabis intake, become aware of your behaviors, and use the plant responsibly. That's the core aspect of this whole issue: Medicate responsibly. We all have to keep it together, or the people who think that weed causes mania (or believe in creationism) will come after our favorite plant.

SEX AND ROMANCE
CULTURE
ADDICTION
POP CULTURE
MORE...
Sophie Saint Thomas
FOLLOW
Sophie Saint Thomas is a writer based in Brooklyn. She was raised in the U.S. Virgin Islands. Along with Merry Jane, her writing has been published in VICE, Cosmopolitan, Marie Claire, High Times, Nylon, Playboy, GQ, Harper's Bazaar and more. Brooklyn Magazine included her on their annual 2016 30 Under 30 Envy List. Her favorite strain of weed is Grand Daddy Purp.
Share this article with your friends!
AD
By using our site you agree to our use of cookies to deliver a better experience.
Accept
Decline
MORE FROM MERRY JANE