HEALTH
Should You Mix Cannabis and Kratom?
AD
Kratom and cannabis are two of nature’s finest organic medicines and intoxicants. But should they be enjoyed together, or will mixing them lead to bad news?
Published on February 5, 2019

Rich in the alkaloids mitragynine and 7-hydroxymitragynine, kratom is best known for its opiate-like effects. Kratom, like cannabis, can be used to treat pain the natural way — without the risk of dependency, overdose, or other malicious side-effects that come with pharmaceutical opioids. Many people even use kratom to control opioid withdrawals, and the plant has become known as nature’s other painkiller. Consumption of the plant evolved from its traditional use for increasing productivity to its current recreational use in Western Culture. Consuming kratom isn’t risk-free, though, but it’s certainly less risky compared to prescription painkillers.

And while most would agree that kratom is safer than opioids, there’s contention about if users should mix it with pot. Some swear that kratom enhances the effects of cannabis, while others claim that kratom and cannabis compete for effects, and are best enjoyed separately. Since cannabis and kratom bind to different receptors in the brain — cannainoid receptors and opioid receptors — consuming each plant will trigger very different biochemical processes and effects. Should people combine their consumption of these organic plants? Or is the supposed synergy a bunch of BS that you’re better off avoiding?

To start, the order of operations will influence your experience mixing the plants. According to online forums, the trick for combining kratom and cannabis involves some KFC (kratom, food, then cannabis). So first consume the kratom, then eat some food, and finally consume your weed. This will prevent users from feeling lightheaded or overwhelmed.

The same considerations should be observed when mixing cannabis with alcohol. “Beer before grass, you’re on your ass; grass before beer you’re in the clear,” people say. Similar logic applies to cannabis and kratom, though let’s be clear: mixing alcohol and marijuana involves greater risks, and we cannot recommend that particular combo.

Chase a beginner’s dose of kratom — which is subjective, but can be somewhere around one to two grams of kratom powder — with food, and you’re less likely to experience the substances competing with one another or magnifying one another. 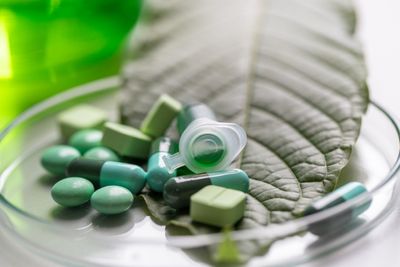 Interestingly, kratom users report that the plant can actually nullify the paranoia and anxiety that occurs when people consume too much THC. Others say this is not the case, and it’s better to consume a CBD-rich cannabis strain to help mitigate anxiety.

And while some people say smoking kratom is heresy and wastes the plant’s active ingredients, others say it’s a winning delivery method. I personally find the taste of kratom to be pleasant when smoked, but I don’t deny that the effects were less noticeable when consumed this way.

Kratom strains like red vein Bali are ideal for pain, although some prefer Borneo or Indo kratom strains. In theory, embracing two different pain management systems at once could more effective treat ailments, but there’s limited-to-no research supporting this claim with regards to cannabis and kratom.

Enjoy It While You Can

Kratom could soon be subject to federal rescheduling, though its future remains unclear.  In August 2016, the Drug Enforcement Administration announced its intent to classify kratom, alongside heroin and cannabis, as a Schedule I narcotic — a classification only given to substances with “no medical value.” There was blowback, however, and the DEA withdrew its plans.

That said, the feds could block access to the plant at any point. Refer to this handy kratom legality map to learn if the substance is allowed in your state. To date, Rhode Island, Vermont, Alabama, Arkansas, Indiana, Wisconsin and Washington, D.C. have banned kratom, plus individual cities. So if you’re looking to mix marijuana with this other all-natural pain killer, you might want to try it sooner than later.

420
HOW TO
MEDICINE
KRATOM
MORE...
IN THIS STORY
CBD
Click to shop at our CBD store
Benjamin M. Adams
FOLLOW
Benjamin Adams is a freelance writer whose work has appeared in a slew of publications including CULTURE, Cannabis Now Magazine, and Vice. Follow Ben on Twitter @BenBot11
Share this article with your friends!
AD
By using our site you agree to our use of cookies to deliver a better experience.
Accept
Decline
MORE FROM MERRY JANE