HEALTH
How Is Synthetic Weed Made, and What Does It Do to Your Body?
AD
Synthetic cannabis like K2 and Spice may seem like convenient, legal alternatives to genuine weed... but they’re nothing like the Real McCoy.
Published on March 27, 2019

Research scientists often use synthetic weed to skirt government restrictions while studying the endocannabinoid system, the cellular network responsible for cannabis’s psychoactive effects and its other therapeutic effects. But, starting in the mid-2000s, synthetics became popular among partiers for the same reason: they’re legal in some places, including areas where weed is completely outlawed.

How Synthetic Weed Is Made

Technically, synthetic weed like Spice isn’t one thing. These weed knock-offs contain a mix of synthetic cannabinoids, often ordered from Chinese companies, that are later dissolved in rubbing alcohol or acetone. The mix gets sprayed on legal herbs like catnip, though some garage chemists use tobacco instead.

So synthetic weed may (kind of) look like real weed, but that’s all for show. Really, there’s no way to tell what’s actually in a bag of K2 or Spice, since labels don’t include a full list of ingredients or their amounts.

The lack of transparency creates headaches for authorities. Law enforcement struggles to track synthetic cannabinoid products since some formulas can contain hundreds of active components, and forensic chemists need some idea of what they’re looking for to properly analyze samples. If there’s an overdose, doctors won’t know which compounds to counteract. 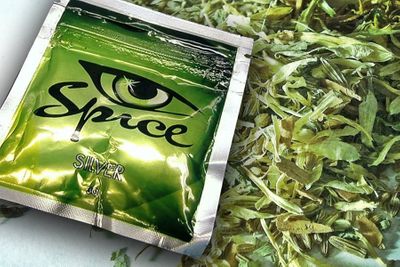 Why Synthetics Are Dangerous

How does synthetic weed damage the body? Scientists aren’t entirely sure, but it likely involves the endocannabinoid system. Natural cannabinoids like THC activate the brain’s cannabinoid receptors to regulate cell signaling, such as reducing pain signals or enhancing feelings of well being.

Fake weed, on the other hand, likely binds much tighter to these same receptors than THC does, warping the cell signals.

Imagine THC is a key that fits perfectly into a lock, the cannabinoid receptor. The key goes in, twists the lock open, and the door opens normally. In contrast, synthetic cannabinoids act more like shotguns blowing doors right off the hinges. 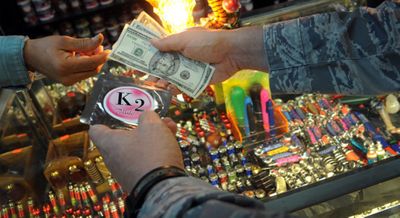 Yet Another Reason Why We Need Legal Weed

While synthetic weed isn’t nearly as popular as genuine green, it’s still a public health crisis. Many jurisdictions have made synthetic cannabinoids illegal, and sports leagues ban their use.

Just how bad has fake weed become? In 2015, VICE reported that synthetic cannabinoids triggered an epidemic among Brooklyn’s homeless population.

"It's insane," one EMT told VICE. "I'm spending my entire tour over at the shelter. But it makes sense, because for five or six bucks you can roll four or five big blunts of this stuff. And the stronger they make it, the more the disenfranchised population is gonna be attracted to it."

In 2016, the New York Times reported that over 130 people overdosed on K2 in New York City across a three-day period. That same year, the son of DC’s former mayor, Marion Barry, died from smoking K2.

Celebs have had bad experiences with fake weed, too. Talk-show host Wendy Williams claimed her son once reacted horribly to synthetics.

In 2012, actress Demi Moore called 911 after she suffered convulsions from a drug “similar to incense.” Some doctors suspected synthetic weed was the culprit.

Not all synthetics are necessarily bad, however. Dronabinol, sold under the brand name Marinol, is a synthetic version of THC used to treat nausea or lack of appetite in cancer patients.

If anything, synthetic cannabis like K2 and Spice prove that drug laws need to be reformed. After all, if weed is legal everywhere, why would anyone want the bunk, deadly version?

HEALTH
SAFETY
CRIME
CULTURE
MORE...
IN THIS STORY
CBD
Click to shop at our CBD store
Randy Robinson
FOLLOW
Based in Denver, Randy studied cannabinoid science while getting a degree in molecular biology at the University of Colorado. When not writing about cannabis, science, politics, or LGBT issues, they can be found exploring nature somewhere in the Rocky Mountains. Catch Randy on Twitter and Instagram @randieseljay
Share this article with your friends!
AD
By using our site you agree to our use of cookies to deliver a better experience.
Accept
Decline
MORE FROM MERRY JANE