HEALTH
Get Wet: 6 Cannabis Products That Can Help with Vaginal Lubrication
AD
Cannabis can enhance sex. A lot. But if you’re a cannabis user who suffers from cotton-pussy, check out these helpful products:
Published on December 14, 2018

Anyone who’s consumed cannabis, or is even aware of the existence of cannabis, likely knows about it’s tendency to cause “cottonmouth,” an annoying condition in which your mouth gets super dry and uncomfortable. Unfortunately, that same mucus-membrane-affecting power can also make your vagina dry, which is one of the biggest trolls of all time.

Marketing and pop culture messages tell us that cannabis is sexy (Rihanna loves it!), so when it dryly disappoints, it can feel like we’re just not doing it right. More simply (and with more vulgarity), to borrow from the great Issa Rae: chaotic cannabis use can make you feel like you have a “broken pussy.”

What I call “chaotic cannabis use” is different for everyone: for me, it’s getting so high that I become uncoordinated, cotton-mouthed and dysfunctional. For you, it might mean using “weed lube” with the expectation that it’ll create actual lubrication for sex stuff, and then being sorely (sorry!) disappointed when it becomes tacky, sticky, and un-lube-like.

But what’s universally clear to me is that the way we talk about using cannabis for sex requires a more specific-yet-subjective discourse that includes a discussion of how to avoid dryness. Someone else has most definitely started this discourse elsewhere, but I wanted to write this so that I would internalize this information. Thanks for coming along for the ride.

Here’s an anecdotal, and entirely subjective rundown of a few cannabis products that might make your sex life better. But please use moderation. And real lube. 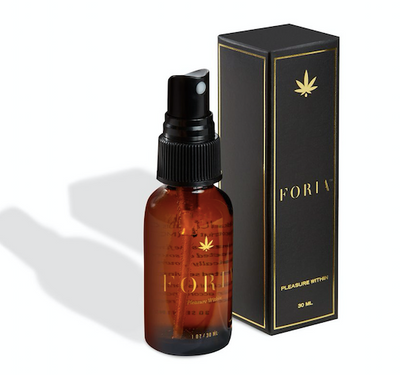 Foria Pleasure rules at making sex feel better, body-high-wise. But here’s the thing with “weed lube,” as it was branded by misguided reviewers (like myself) over the last couple years: it’s not lube. It’s THC-infused coconut oil. THC, as you know, is what gets you stoned. So — while powerful for getting your vagina stoned, warmed up, and more sensation-ready for sex — Foria pleasure isn’t good “lube” because coconut oil isn’t a good lube.

Sexual health educator Kaitlin Kucewicz explained this over email: “Oil is great for cannabis-infusing because it’s fatty, but it isn’t great as lubrication. Oil based-lubricants break down condoms, are thicker and harder to clean, which can lead to vaginal infections,” and perhaps worst of all, “they stain.” Kaitlin and I agree that these are things most of us would like to avoid during sex, which brings us to a product she deems worthy of trying in the lube arena. 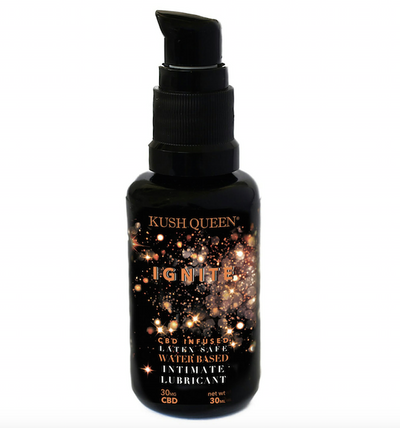 This one is water-based, which Kaitlin thinks is good news, given that water-based lube is “the best for your vagina.” It has CBD in it, which is good for reducing inflammation and a bunch of other stuff I’m fairly certain I don’t need to tell you. Most importantly, though: it’s lube. Actual lube. One note from Kaitlin: “this lubricant does contain cannabis oil but is still compatible with a latex condom because it does not contain enough oil to effect the material.” Cool. Good. Great. Moving on. Leave it to Whoopi Goldberg — a true cannabis angel, genius, and innovator before it was cool — to have made a whole line dedicated to helping people with vaginas and/or ovaries deal with the troubles that come with them. Kaitlin told us that “although these products are designed to help with menstrual cramps, they can also help to relax the pelvic floor, increase pleasure, and decrease pain.” I believe her because I believe Whoopi. Sue me. 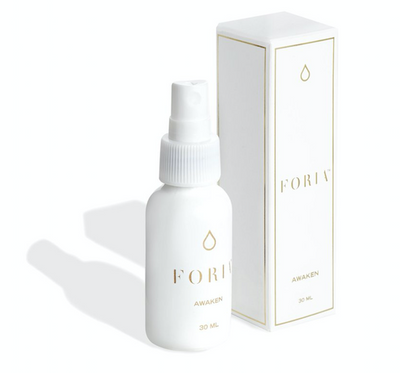 I use this before sex and prefer it over the Pleasure formula — possibly, purely because when I used Foria Pleasure I was way too high because I drank it and I also thought it was actual lube. Anyway. Foria Awaken, according to its website, has a “rich chocolate & mint aroma” and is made with “8 plant-based aphrodisiacs...and nothing else” to enhance “tactile sensation & pleasure while decreasing tension, discomfort and dryness.” And according to me: it smells like mint chocolate chip, doesn’t taste bad, and feels good during and after massaging it on. Don’t use it with latex condoms or mistake it for lube, though: it’s not lube. I guess I’ll be screaming that until I die, huh? Anyway. Let’s talk about things that don’t go on or in your vagina. 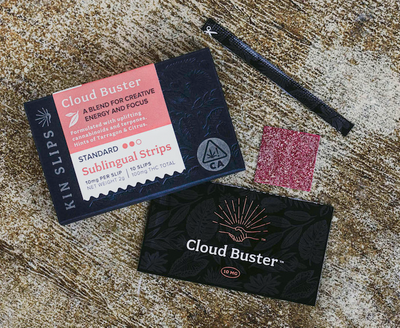 5. The Cloud Buster Blend from Kinslips

I asked my friend Marta Mae Freedman, queen of all things cannabis and co-founder/creative director at Nice Paper (their newsletters rule), to tell me about her favorite products for sex. Her first rec is the brand Kinslips. “They’re a sublingual strip that dissolves under your tongue,” Marta told me over iMessage. “It’s a creative, uplifting high that I think is really fun.” I believe her because Marta rules. Her message rhymed and I know she didn’t mean to rhyme. So there’s that. 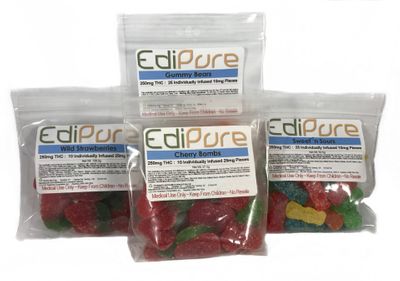 Much like me and many others, Marta also loves having sex on edibles. She loves Kiva and Edipure, and the chocolate covered strawberry gummies are her favorite. Why edibles, you probably are not asking? “Smoking together is really fun, but it also hits your system so quick— it could be easy to get too high,” Marta said. “With edibles, you have some time to ease into it and then your body catches up.” Makes sense. Checks out. Case closed.

420
WOMEN
HEALTH
SEX AND ROMANCE
MORE...
IN THIS STORY
CBD
Click to shop at our CBD store
Crissy Milazzo
FOLLOW
Crissy Milazzo is a writer from New Jersey who lives in L.A. and had a cold at the time when her editor asked for a headshot.
Share this article with your friends!
AD
By using our site you agree to our use of cookies to deliver a better experience.
Accept
Decline
MORE FROM MERRY JANE