CULTURE
Your Guide to Winning & Sinning in Vegas with Snoop Dogg's POUNDS G2 Glass Line
AD
Not sure what to do in Vegas? Let Snoop give you the Dogg Pound tour of Sin City in celebration of his newest bong, "LAS."
Published on August 22, 2019

Earlier this year, Snoop Dogg launched an airport-themed line of POUNDS 2 bongs and glassware. Each new item is named and crafted in tribute to major American cities where the Doggfather particularly loves to touch down — and, of course, get high.

After last month’s stop in MIA, let’s jet west to Vegas in honor of Snoop’s new LAS bong. Chance and risk are what Vegas is all about. But there’s no time for games when it comes to choosing the smoking gear that suits the vibe of Sin City. With that in mind — and with sweet herb packed into the bowl — Snoop’s LAS is a sure bet. Torch it up and play to win.

Before we hit the Strip to check out the Doggfather’s fave spots to chill, here’s a quick hit on the LAS bong.

The LAS is a 7.5-inch water pipe designed for herb and concentrates. It features an inline tire percolator, an elevated base, a 14mm male herb bowl, and a dab kit loaded with a carb cap, banger, and tool. Plus, in keeping with the showmanship inherent to both Snoop and Vegas, the LAS also comes with its own super-stylish display box.

As a nonstop, round-the-clock source of the high stakes, thrills, and even higher pay-offs, the LAS delivers precisely what it takes to stay lit in the city of endless lights. It’s an ideal bong for Vegas, whether you’re puffing en route to the poker table, blazing before watching a UFC championship, imbibing cannabis as a pre-club ritual, or indulging your munchies amidst the city’s legendary late-night food options.

Now that Snoop’s created the perfect pipe for Vegas, let’s use it to prepare for rolling into all the joints he loves to drop by most when he’s on tour and hits Sin City. 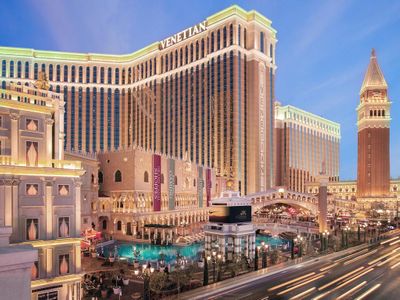 With breathtaking design and awe-inspiring architecture that instantly transports visitors to the eternal beauty of Venice, Italy, the Venetian is not just the largest resort on the strip, it’s also the Las Vegas Dogg House supreme.

The city’s ultimate luxury wonderland made history with the Snoopadelic Cabaret residency back in 2014, which forever crowned Snoop Dogg the first Hip Hop Resident of Las Vegas. All dogs are loyal, and the D-O-double-G, for sure, has been smokingly satisfied since then to make the Venetian his desert paradise HQ.

In fact, it’s possible to stay at the Venetian and experience everything Vegas has to offer without ever leaving — except scoring more weed. Snoop’s Vegas home base spans over 2.3 million square feet with more than 7,000 suites, one million square feet of retail, more than 30 restaurants, and multiple theaters and nightclubs, including the legendary Tao. So just check in, toke up, and bliss out. 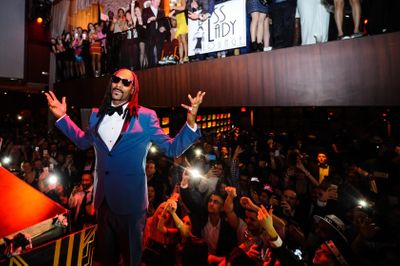 As previously stated, Tao at the Venetian will be perpetually honored as the actual birthplace of the Snoopadelic Cabaret and, since that landmark residency, the venue has continued to elevate the experience of every comer.

Start your Vegas evening with first-class style, then, by indulging in exquisite flavors and elegant ambiance, while knowing that bud-boosted bacchanalia lies ahead.

To that end, Snoop recommends Tao’s Dinner and Nightlife package. It comes with a three-course meal served at a VIP table with one bottle and mixers. Afterward, it’s off to Tao’s nightclub to dance, drink, and dab.

Tao’s menu specializes in gourmet cuisine from China and Japan, and the club is similarly Asian-themed. The quality of the food, service, music, and atmosphere, however, is universal in nature though and the international word for it is “dope," obviously. 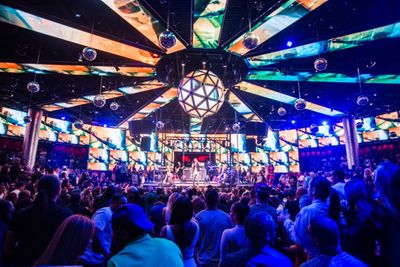 After taking it all in at Tao, Snoop typically points his posse in the direction of Drai’s for the after party.

Known as the premiere live music venue on the strip, Drai’s boasts A-list rap royalty, rock stars, and Hollywood headliners both on-stage and off. The environs are lush, plush, and swankified, which is perfectly in keeping with the clientele you’ll come across at Drai’s, too.

So take a big ol’ bong rip from your LAS, then bump and pump to the banging beats and ecstatic overwhelm that erupts from Drai’s two ferociously lit full-service bars. 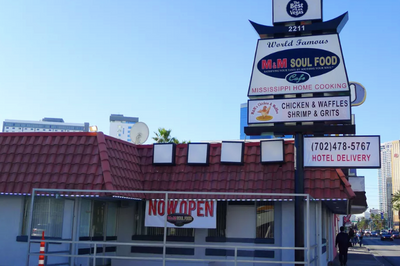 A key rule of Snoop’s munchie-prone, late-night lifestyle is knowing the finest kitchens that never close. M&M Soul Food Café serves up down-home basics at all hours that convey the comforts of home with the top-tier quality of Vegas dining.

We’ve all gotten stoned, hit the scene, and then crowded into a diner booth or around a roadside café table to scarf down omelets, pork chops, pancakes, sausage, chicken fried steak, biscuits and gravy, and shrimp and grits — but you’ve never tasted them the way M&M makes them happen. 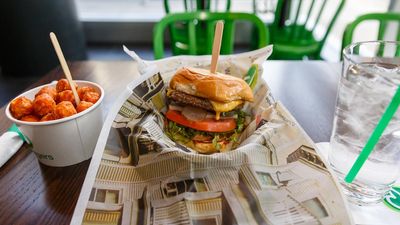 Nothing boosts a round-the-clock, cannabis-infused Vegas run like biting into a perfectly cooked beef patty with all the proper fixings and, for that, Snoop’s hot-and-juicy go-to is Wahlburgers.

The burgers, though, are just the beginning. What Whahlburgers does for ground beef, cheese, and bread — i.e., turn every bite into a tripped-out taste sensation — the restaurant also does for sandwiches and signature cocktails.

We like to wash down the chow with a Wicked Wahlbanger, which is a combination of Stoli Vanilla Vodka, mango juice, and orange juice topped off with a splash of Galliano.

After a step outside for a bit of appetite-reviving reefer, the perfect dessert drink is the Fluffanuttah, a concoction comprised of Vanilla Ice Cream, marshmallow vodka, marshmallow fluff, and whipped cream. Just be sure you’re stoned enough to order that one with the appropriate Boston accent. 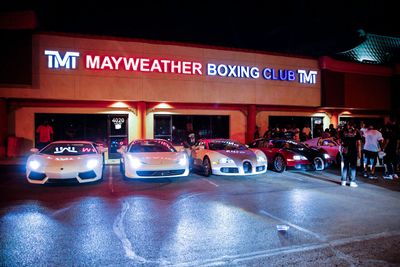 For Snoop, life isn’t just about getting high — it’s about getting high as a way to more fully enjoy everything that comes at you. That ranges from rapping, recording, acting, hosting, coaching, carousing, cooking with Martha Stewart, and even getting into the ring with professional boxing legend Floyd Mayweather, Sr.

The Mayweather Boxing Club in Las Vegas offers the opportunity to get trained by the master himself, be it by way of a one-on-on Contender Experience or as a group with the Championship Experience.

It’s likely best not to smoke before putting on the gloves before going toe-to-toe with Floyd Mayweather, Sr., but it’s a once-in-a-lifetime encounter that you’ll want to immediately intensify by firing up a fatty right after. One of the dankest aspects of Vegas is that you never know who you’ll run into there — from your old joint-rolling pals to the upper echelons of celebrity revelers. In the latter category, of course, there’s always a chance that you will come across Snoop Dogg. Just look for the clouds!

You can always hedge your bet, though, and get blasted before dropping by Madame Tussaud’s Wax Museum where there’s a blazingly realistic, life size replica of Snoop that you can pose and pretend to be sharing a joint with.

Other recent celeb facsimiles include Drake, Khloé Kardashian, and Samuel L. Jackson as Sgt. Nick Fury. In addition, Madame Tussaud’s now features a virtual reality experience that you don’t need to be stoned to get wowed by — but, really, you’re in Vegas, so you should be stoned the whole time! 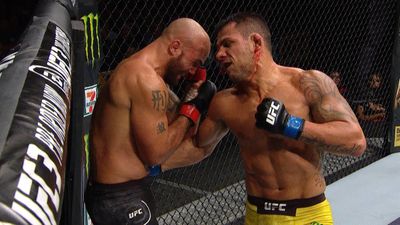 Finally, these modern day gladiators are to combat what Snoop Dogg is to hip-hop and marijuana: fucking legends.

That’s why Snoop regularly flies in to Vegas for fight nights. Getting high, betting big, and cheering on champions is the very essence of Las Vegas, and every professional brawl should therefore be an invitation to bust out Snoop’s LAS bong, blaze up, and kick it ringside.

Plus, UFC fighters are known to be among the most cannabis-friendly athletes, as the legaue doesn't discriminate against the plant the way other professional sports leagues do. There's literally never been a more perfect event in which to get blazed.

This guide is sponsored by POUNDS. Visit Grasscity.com to cop the LAS glass for yourself here.

LAS VEGAS
GLASS
ADVERTORIAL
SNOOP DOGG
MORE...
MERRY JANE Staff
FOLLOW
MERRY JANE is based in Los Angeles, California and is dedicated to elevating the discussion around cannabis culture.
Share this article with your friends!
AD
By using our site you agree to our use of cookies to deliver a better experience.
Accept
Decline
MORE FROM MERRY JANE